Best turned out bike on the road 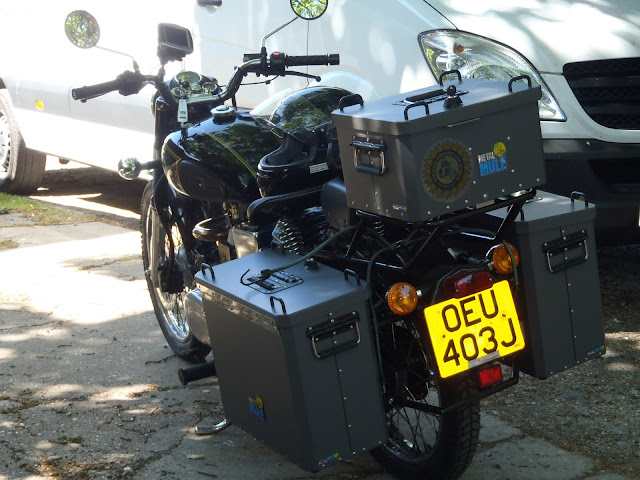 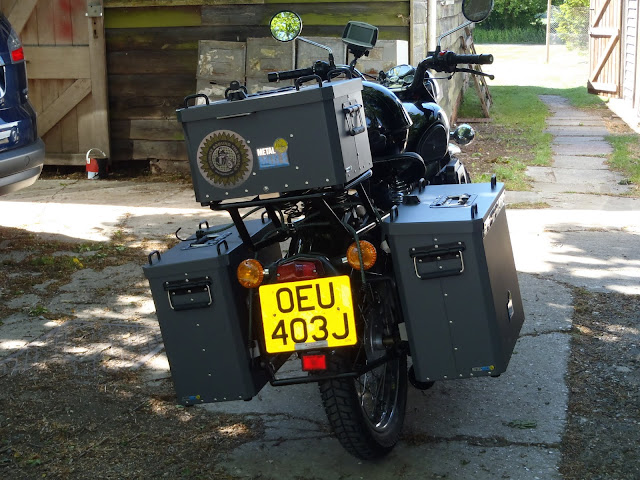 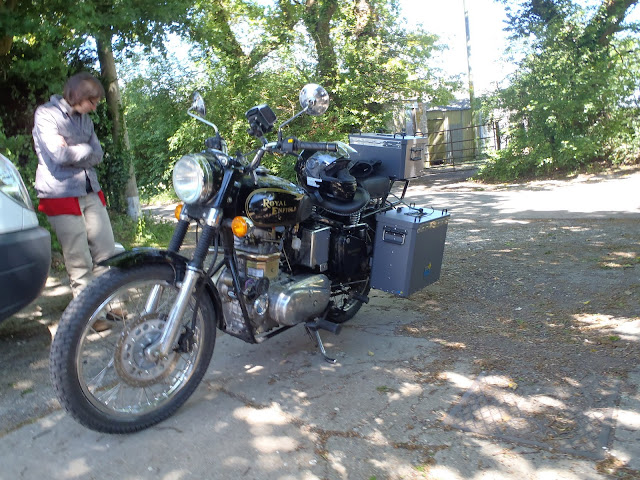 Yesterday found us down near Brighton fitting the new panniers, they are made by Metal Mule, and are beautifully finished an extremely strong and practical for my needs. Paul and his colleagues were fantastic in helping me set it up and in fact are going to refine the Top box fittings furthermore over the next week.

It is apparently the first time the boxes have been fitted to a Royal Enfield, and Paul has taken particular interest in this venture, and sees more and more overlanders electing to use more classic bikes to add greater dimensions to people's journeys.

You may notice that there is a sticker on the back of the top box of the logo. I have had many printed both of this size and smaller, 2 inch diameter to stick around the world as I go. A quick plug for AA Labels, who have been both excellent in turnaround and in quality. Whilst I did plan to get some stickers for the boxes, it was my flatmate Paddy ClanWilliam who suggested getting the smaller labels for the trip. Paddy is a veteran overland motorcyclists of some 10 significant journeys, here is a link to his more recent one http://www.london2tbilisi.com . With all his knowledge and experience he is an excellent friend to have in the house whilst preparing.
This is a photograph of him cracking open a bottle of fizz when I first got Batty home. 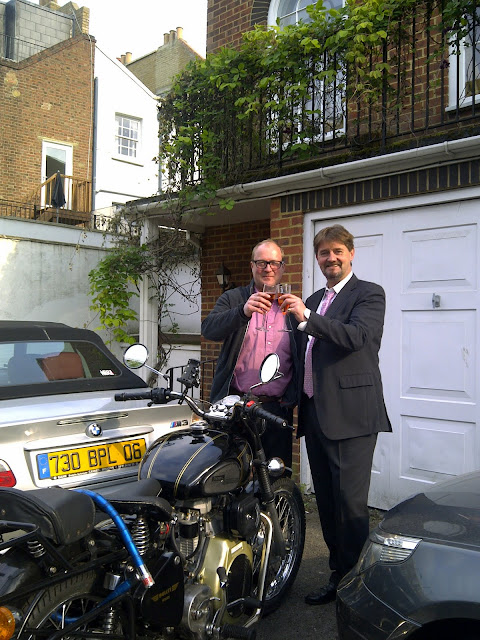 Before Batty and I leave, the plan is to have covered about 2000 miles on trials. I left on Saturday morning for my cousins Charlie, Sarah  and Arthur who live near the Humber in Lincolnshire, it is normally a 200 mile run, but with the satnav set to avoid motorways etc it turned out to be more like 250. With a vicious headwind, it proved to be quite a test for Batty's 10 hp engine, which is good for 50 mph on the flat, but sometimes this was down to 40 mph. About seven hours we arrived having wiggled up through  the  Fens and enjoyed seeing a lot of the country which motorways deny you. Charlie, Sarah  and Arthur had laid on a bit of a gathering of Lincolnshire pals and it was lovely to see  them all before going. Some great photos were taken but alas, l managed to delete them as I downloaded images from both the camera and my phone at the same time. So annoying……but a lesson learnt. Found them.....

The trial continued the next day, having changed oil with Charlie at the 300 mile mark,  dropping in on pals, Mark Watkinson (of logo artwork fame) and and Dan and Henrietta Black before heading to Ely  where I stayed in a local pub  and was a tourist for a few hours.

The strong winds did not give up and the next day I eventually got home at about nine o'clock in the evening having stopped to see Giles and Ali on the way south.

Batty was fantastic and very comfortable to ride, although I'm sure I will get a lot more saddle fit, I don't think many bikes offer the comfort of that big seat and the general riding position. Although weary after long days, I was not stiff of limb or swore of ass.

After consultation with Henry of price part, my concerns about only doing about 80 or 90 miles a gallon on vegetable oil are not founded, and I am assured that it is a matter of adjustment before we see the mileage up to the 150 mpg territory.
Posted by Unknown at 8:39 AM No comments: