Hostel and hotel selection is a real hit and miss game in my experience. Guide books help, as do the various websites, but often one arrives in a small town or village and it is a matter of driving around, knocking on the doors of establishments that look about right in terms of  appearance, budget and availability. I have enjoyed very comfortable stay for between $5 and $10, with good beds, clean en-suite bathrooms, hot showers, fast wifi, good breakfasts, stunning views and friendly hosts. On the flip side one can end up in a pretty grotty cell-like endurance for 5x that. The latter has one leaving for an early morning start, the former makes any chance of a large mileage day out of the question as wrenching oneself from the haven either fails and one stays another day, or check out time is the motivator, 12 noon in some cases.

The prompt for writing this was in El Calafate (which is were the last post ended) the only place I could find was the Upsala Hotel, perfectly nice and presentable, quite expensive at $50 per night, it was in peak holiday season near one of the country's top tourist attraction, the Perito Moreno glacier. However when the bags where in the room, it rather dawned on me that it was rather like an old age people's home. Not only were my fellow guests well beyond retirement age, it was the intense heat from the radiators that really made the parallel. This was in no way a complaint, as I arrived wet and cold. The rapid thaw was a great blessing. My sodden boots were perfectly dry and toasty for the next day, a most important mood maker for any motorcyclist.

There was only a couple of hundred miles to go before reaching the most southerly point that Batty was going to get to in South America. One can spend hours researching roads and routes, and of course sometimes that is necessary on a new and precarious route. However the map told me what look like pretty good roads all the way, so I did no checking beyond that. Had I, it would have been apparent that a 50 mile section of Ruta 40 can be a mud fest after rain. It had rained heavily for the last few days. What I had thought would be five or six hours to Puerto Natales took at least 2 hours more because of that 50 mile stretch.  So thick and sticky was the muddy gravel mix that it filled up the gap between the front wheel and the mudguard forcing the bike to a grinding halt. After a couple of attempts digging the mud out to free the damn thing, I gave up and took the mudguard off altogether. Problem solved but it did make the rider and bike somewhat mud covered.

Gordon had made it to the ferry, so after a day, changing the oil and doing various other bits and pieces on the bikes we boarded the Evangelista,  our home for the next four nights along with about 100 other passengers on the way back north to Puerto Montt. It is a stunning journey as this weekly service wiggles its way through the Chilean archipelago for about 1000 miles, only coming out into the Pacific Ocean for about six hours in all that time. Glaciers, mountains and beautiful fjords on remarkably calm waters made what had been first suggested by David in Thailand, and then enthused about by Hugh a few weeks before, a great thing to have done. 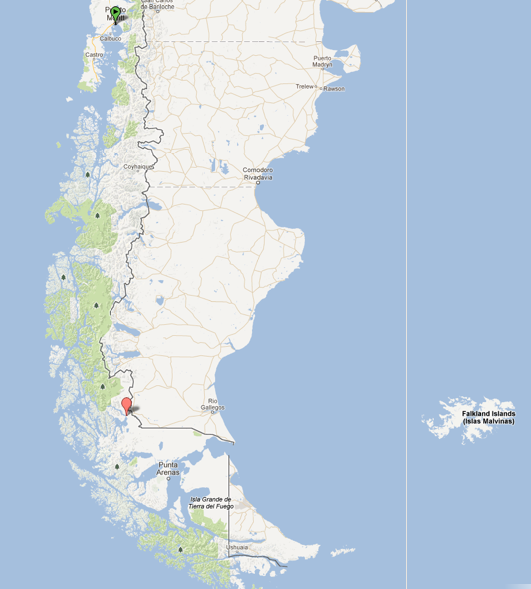 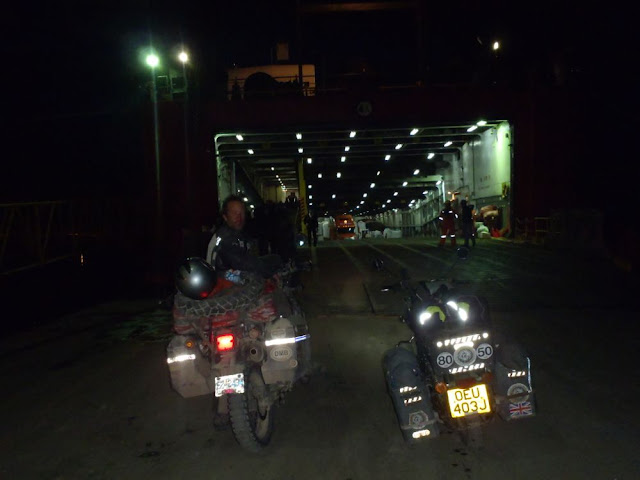 It doesn't take long to start meeting fellow travelers, particularly when armed with the 4 smuggled aboard bottles of rum that Gordon had so wisely suggested. The evenings' drinks started early, at about tea time. In fact the sun over the yard arm was not going to happen till 8 or 9 o'clock at night, being so far south, so that was a rule quickly side stepped. 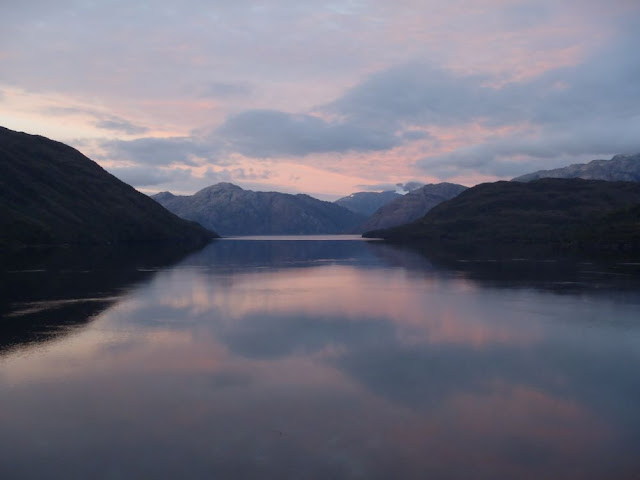 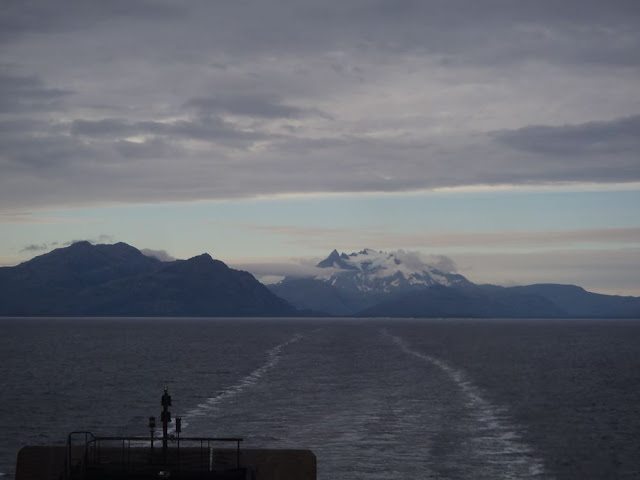 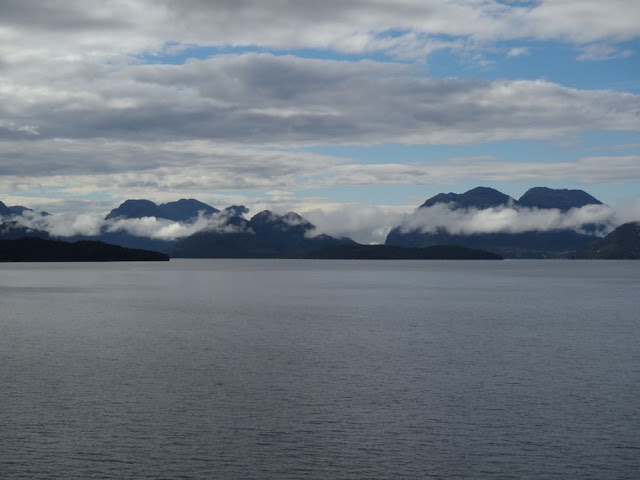 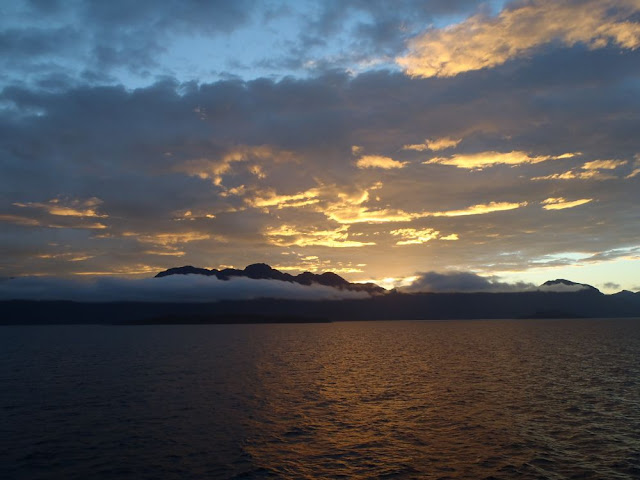 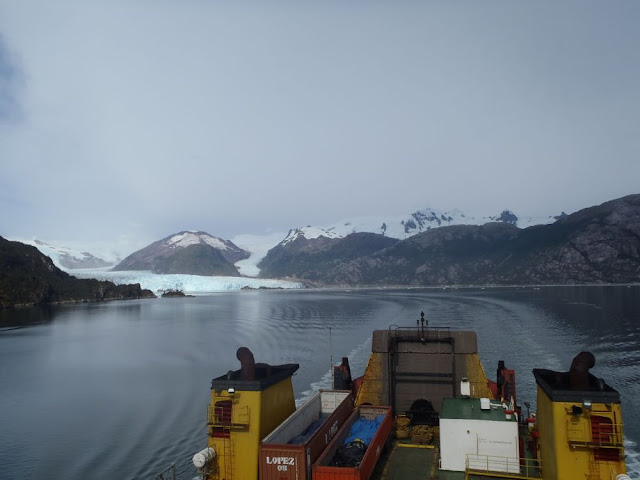 In Puerto Montt, having arrived at 7 o'clock in the morning, Gordon took me to a mechanic that he had used on his way south. Batty had a bent rear suspension lug, and a seat spring loose. When time allows, I'm going to count the number of times I have been in a welding shop with Batty. It must be around 20 times. The great thing is that it never takes very long,  a quick weld is a great fix and a joy to watch being done well. What started off as a annoyance and concern earlier on the trip, is now something I rather enjoy needing done.

It was a 1200 mile ride to Buenos Aires. The first couple of hundred miles was back over the Andes, crossing the Chile/Argentine border for the sixth and final time. My passport is completely full and the poor immigration officers struggled to find a place to stamp. The second day's ride was delightfully enhanced with lunch with Hugo, Jessica and Victoria who had come out from Baroloche to a excellent restaurant that they knew, that so happened to be on my way. Later that afternoon I ran out of fuel again, having failed to spot the planned for station (they can be several 100km apart). Whilst a bit annoying at the time, new adventures always start with such happenings. I locked up the bike and after about 10 minutes my raised thumb yielded a lift with Santi, a kind English-speaking man who took me to a garage he knew half an hour further on. By the time I got back to the bike and then back to the town where I've got the fuel from for the night, it was about 9 o'clock in the evening.
The next days were just all about sitting and riding a very flat landscape. Pretty imparts, but really just huge open plains, massive skies on a bike that is going perfectly well, but has now decided that 45 miles an hour is her top speed. I think something must have adjusted itself in the inaccessible throttle mechanism, it would take a day to sort it out, and at the moment don't feel it is worth it for a few miles an hour more. Anyway I have enjoyed listening to a biography of Abraham Lincoln, along with my staple podcasts of Desert Island discs, From Our Own Correspondent, Business Daily, Peter Day's World of Business, Click, Great Lives, The Bottom Line, the Harvard update, to name a few.


In total it took five days, the only other adventure being my first puncture. Again I took to hitchhiking with the offending wheel and was back on the road within an hour and a half, which I was amazed about. Hitchhiking with a flat tire engenders rapid sympathy it appears.

I was only in Buenos Aires for a day on the first visit and went on a "free" walking tour of the city. Free means "a tip would be greatly appreciated". I have done a few of these in various cities, and they are a great way to get to know the city a bit, not only the history and sites, but also the politics and the places to visit by oneself. I wish I'd done it more often, as they seem to be common in most cities nowadays. 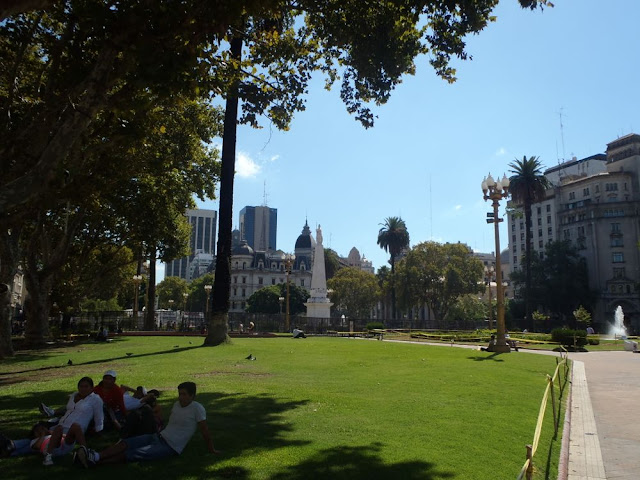 Alejandro was a friend from the Entrepreneurs Organisation in London, and has been a super friend to me here in Argentina. He encouraged me to come up to his new place 600 miles north of Buenos Aires, which I did. He has recently started trading in Yerba, the plant behind the omnipresent drink called Mate, seen in the hands of  thousands and millions of Argentinians, Chileans, Brazilians, Uruguayans, and Paraguayans. It smells like hay, tastes a bit like it, however it does contain three times the amount of caffeine that coffee has, which may account for its almost addictive status.

Alejandro lives in a very splendid house in the heart of Yerba country in an area called Misiones, a spit of  land surrounded by Uruguay, Brazil, and Paraguay. It's most famous sight is the Iguazu Falls, the biggest waterfalls in the world in terms of breath and scale. I was kindly taken there by my host over a couple of days, which gave us the chance to see it both from the Argentinian side and the Brazilian. Both fantastic as they are different. Had I gone there alone, it would not have occurred to me to see both sides, I'm very glad that we did. 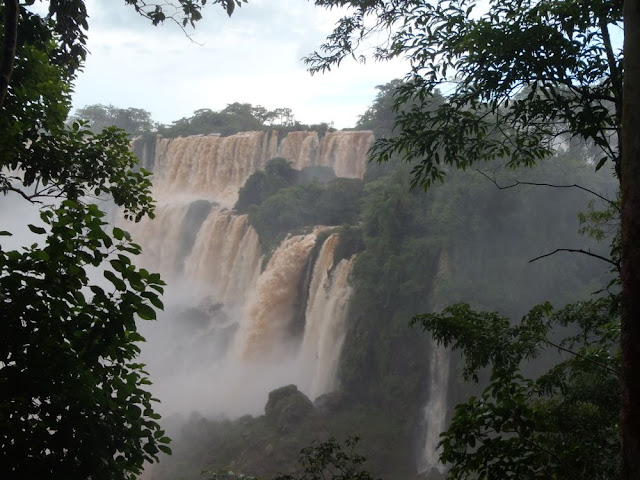 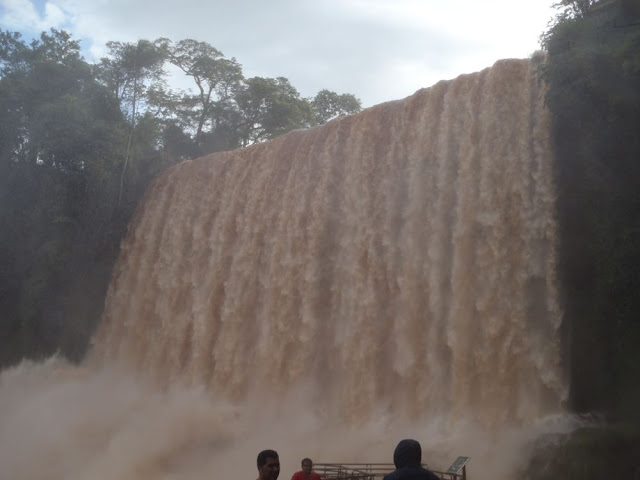 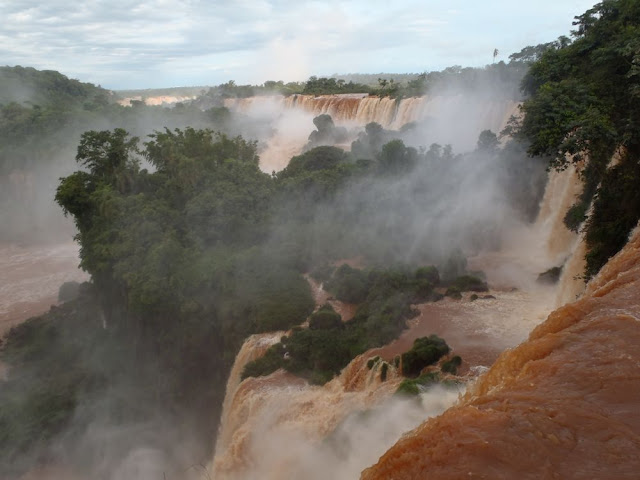 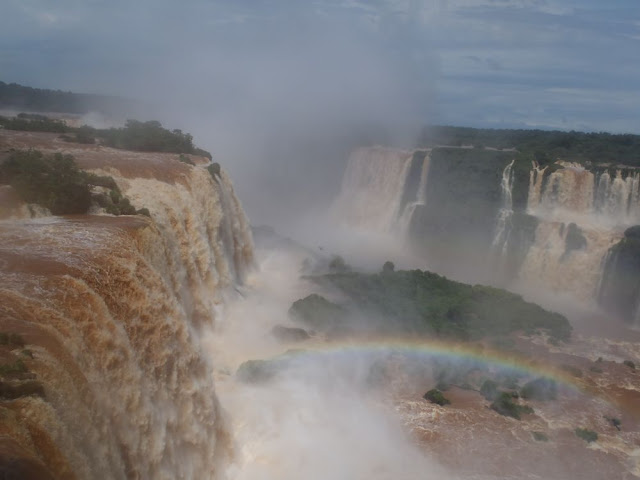 After a few days seeing how the Yerba business works and many great conversations and times, it was time to head back to Buenos Aires because it was Maria's birthday, Alejandro's lovely girlfriend. I took one of the sleeper buses, which are incredibly comfortably and takes one on a 10 hour overnight journey. It was so comfortable that at least seven hours were spent asleep, with time enough to read a few chapters and watch a movie. It makes me wonder why such services are not available between London and Edinburgh/Glasgow, far more comfortable than the train sleeper. The only downside was that I left my camera by the seat, never to be seen again.

Batty needed a new chain and rear sprocket rather desperately.  I rather cheekily asked Jorge if he minded  me using his address to send the parts to. I had met him in a fuel station in the Andes, he having bounded up to me saying "I've got a Royal Enfield in BA, please get in touch when you get there".  He owns a garage and to my mind could make it a bit more efficient with the delivery, having had to jump through various hoops historically when receiving parcels from England. Amazingly it only took three days, full marks to UPS, and Henry - ever the efficient dispatcher of needed parts.
The real bonus was having a very pleasurable two-hour lunch with Jorge.

The day ended in a rather similar theme, although this time it goes back to a delightful meeting with a lady called Fabiana, who I'd met 18 months ago in Rajasthan, India. We had spent a few days in the same hotel including camel riding together. I had promised to get in touch when in BA, and did so. The problem was that Fabiana had not finished traveling and was in China. Such is the enthusiastic and generous nature of this friend, she emailed lots of her pals and I have been enjoying their company both actual and by email since. Dinner with Ramon that evening, with other plans afoot.

Of course the great news in Argentina is the election of Francis as Pope. The country is in complete surprised elation, he is a hugely respected and admired man here anyway, and being the first non-European Pope brings a new focus on South America as a whole.
Everybody I have spoken to, from taxi drivers to business owners, motorcyclists, to barbers, the feeling is that at last there is a stronger counter power to that of the current president, Cristina Fernández de Kirchner.  Her popularity is very mixed, and to those I have spoken to, her populist policies are leading this country into a land of over-regulation, mass inflation and increasing corruption.  Now, the thinking goes, the church which has not supported her, could feel more emboldened in their exposures of human rights etc, which in turn would embolden the business community (who fear vicious tax inspections etc given a word of dissent) and some of the unions to bring greater opposition to the regime and perhaps bring about the beginning of the end of her premiership.  It will be fascinating to watch how this troubled land, of extraordinary abundance, tackles the coming years.
Posted by harryls at 2:19 PM 7 comments: