Stuck to the motorway to the border. It was about 250 miles and very light traffic. I wanted to push on and get into Asia.
I had not particularly thought about Greece in terms of expectation of experience, it was a country to cross on the way to Eastern promise. Funnily enough I have enjoyed the country and it's people a great deal. Nothing but friendliness and generosity. The roads are a dream, mixing exciting scenery, very little traffic and generally good repair. That said I did have one hairy moment on the first day, when the road suddenly narrowed because of a landslip. The right hand side of the road was an unguarded precipice of hundreds of feet and the on coming car only gave me inches to squeeze between it and the said cliff face. Both Batty and I did a cartoon type breathing in act to make it.
This was my first border crossing of any consequence. Of course I completely forgot all the stuff I had been reading up on and made a bit of a meal of it. After about an hour of to-ing and fro-ing, being sent from one kiosk to another, accompanied by insanely loud piped Turkish music, I was in the land with the red flag with stars and a young moon.
Staying in Gallipoli in a somewhat suspect hotel, but with a great proprietor who has helped get road maps and a fine diner.
25th June
It is difficult when in a place that nearly a hundred years ago were the fields of huge loss of life, of extraordinary suffering and bravery, to know as where or what to see. I decided to just drive around the peninsular that saw much of the fighting and stopped at the most southern point, where there is a huge commonwealth memorial. 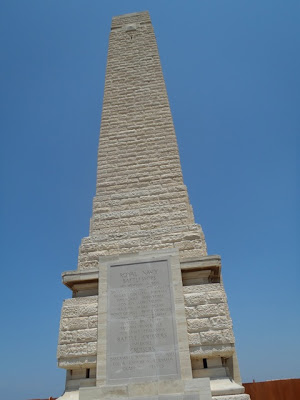 There are so many memorials every few miles that it gives some scale of the fight. Whatever the rights or wrongs, and who did what, it is the Turkish massive loss that I found extraordinary, something like 3 to 1. The French were the second biggest losers, followed by the Brits and Commonwealth countries. The Turks were defending their land, and in spite of their loss, this is the translation of a Kemal Ataturk's words that gives a little bit of the hint of graciousness and generosity of spirit that has been my experience over the last 48 hrs (apart from some drivers...): 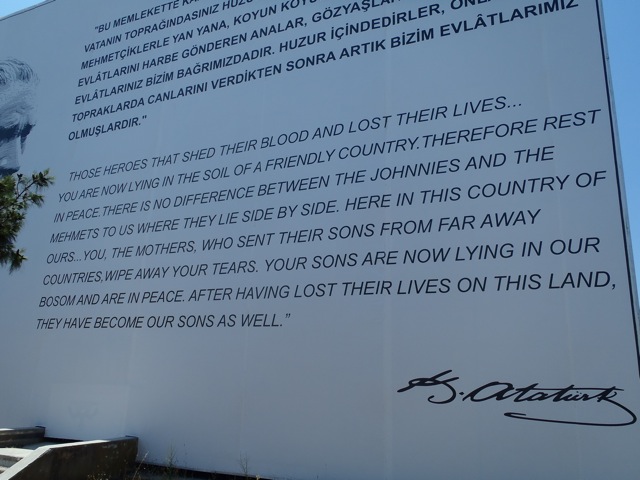 I ferried across the Dardanelles to Asia, and you can see why it was so strategic. This stretch of water that took about 10 mins to cross, connects 2 economic and political worlds. Had Churchill and his fellow planners succeeded in beating the Turks it would have changed the shape of the war enormously. 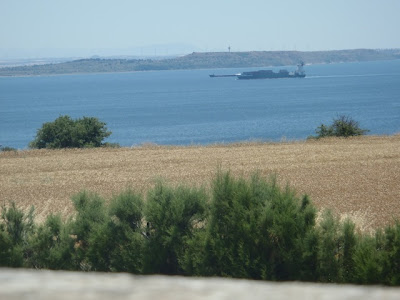 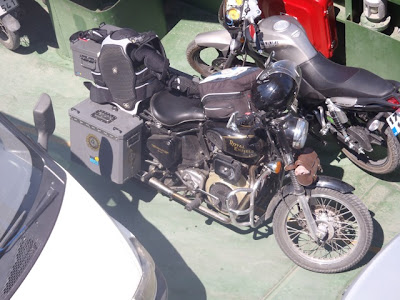 Batty on the ferry across the Dardanelles,  her 3rd time on water, she has quite got her sea wheels.
In the later afternoon I went to Troy. Although ruins, it again was positioned very strategically as a trading post/ harbour for ships that could then only sail with the wind. As the prevailing wind is from the north, ships had to wait a long time at Troy for the southerly wind. This caused trouble as the Greeks and then the Romans wanted to lay their hands on it.. I had a good look around for Helen, but alas not even a glimmer. 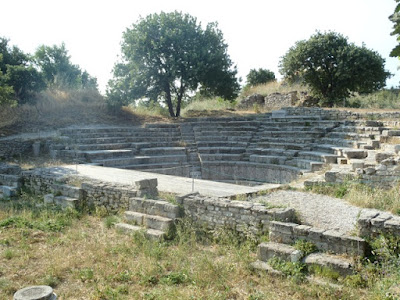 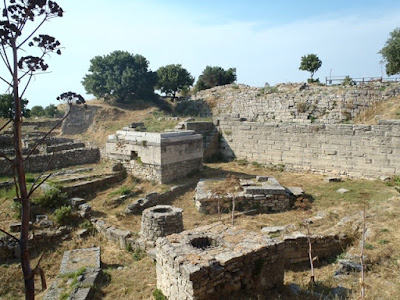 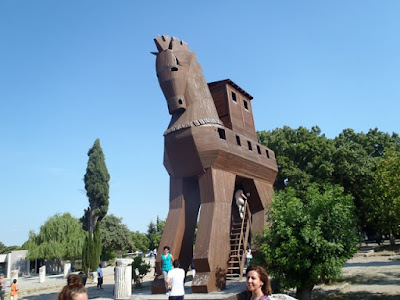 Horror of horror, I suppose they have to for the kids? 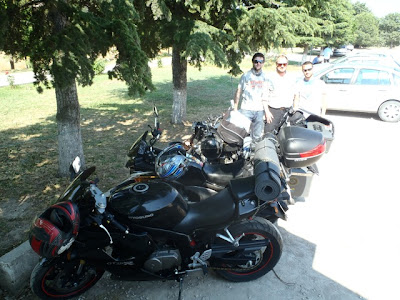 Some fellow bikers, every friendly and spoke great English (please say hello here if you read this blog, I am afraid I did not catch your names). Thank you and hello again Erdem and Cihan, it was great to meet you and good luck in India and your studies.
I think I have started to get careless, I managed to leave my laptop on top of the bike and in clear view of everyone for over an hour, whilst I went around the War Memorial. And I have also lost a credit card. I am sure it is not stolen, as I keep it with others, but it must have been left in the ATM machine....that will be a headache. Sharpen up Harry
Posted by Unknown at 8:35 PM 11 comments:

What was meant to be a 2 day, 3 night r&r has been extended by an extra day. Yesterday I either ate a funny squid, took on some seawater, or had too much sun. The result was a somewhat sleepless night ( best endured alone) and a considerable weight loss. Enough said.
The extra day has been useful as I have been able to send all my camping kit to Sarah, my colleague in Australia. Now that I am at the end of Europe, and guest houses are the price of camping sites till I get to Auz, it makes sense . It amounted to 10 kilos, or a stone and a half. What with this, some other rationing of kit and my own lightening, Batty will have an easier job by probably 15KGs or 2 stone. It will also make her less top heavy, which has to be a good thing.
Am going for Turkey tomorrow, and will cross the boarder if I get there in time, or first thing on Sat.
BTW. The riddle of the furs has been explained, there are lots of Russians holidaying here and they are the market. I guess Greek fur is cheaper than Russian, or better. Who knows, but there are a hell of a lot of furs for sale, so I guess it is good business.
Posted by Unknown at 5:06 PM 3 comments:

Managed about 6 hrs kip on the ferry, and set off North. Garmin the Challenging, had us going up tracks and lanes that a enduro bike would have been made for, but Batty held her own despite her rider's anx. Harry the Idiot had forgotten to reprogram the routing system, so the shortest route, included tracks.
Once back on hard stuff, I was taken into a world of natural beauty and quiet yet thrilling roads, that it had me re-gauging my index. Historically I had the Pyrenees as the prettiest mountains, then the Alps in my experience to date, but the Veloyxi are top of the pops for me now. 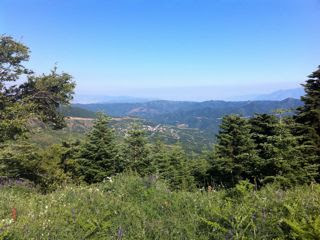 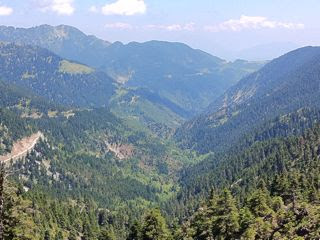 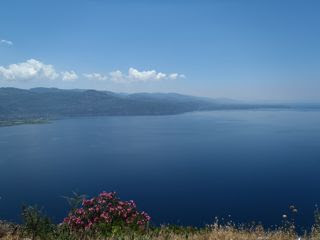 This natural beauty was then complemented by the people I met. First off a local farm insisted on buying me a drink in a bar an hour or so after arriving in the country, only to be followed by Kostas and Anna Noetakitz standing me dinner in the evening. I had met them as I turned up at a taverna, just a short way from the guesthouse I was staying in. Batty again, you see, was the magnet. A delightful couple on a 3 day break from Athens visiting her home town of Loutra Smokovou. I was there because it had got about 6pm and I needed to find a bed and happened upon this idillic spar village. Kostas spoke good English, although he claims that it was just from school- he must have been top of the class. they told be much about this magical place and I had the best day and evening of the trip having left friends 1000 miles back.
Batty clocked 5000 miles today.

This whole area was at Philippe's hints and he was very right. He also suggested going to the Meteora area...reminding me of the James Bond films when Roger Moore scales a fantastic rock face on service to her Majesty. I hadn't realised that there are a host of them: 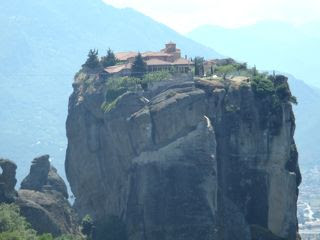 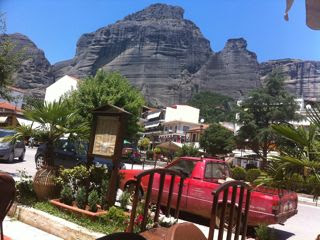 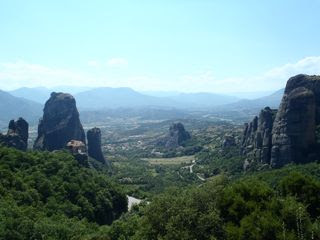 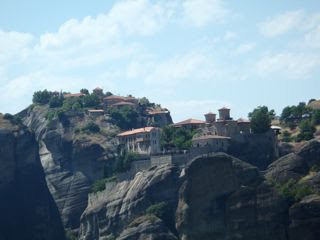 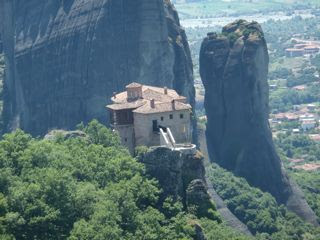 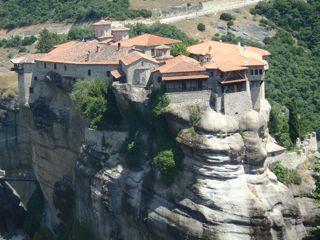 Having spent a few hours at these marvels, it was off to the beach for me. Paralia is a classic seaside resort with thousands of holidaymakers and highly geared for the job. It is easy and mindless and perfect place for a couple of days R&R. I have taken a room 150 yrds back from the beach for a gentle €25 per night. It is a weird place...and particularly my street, where all you can buy is fur coats. I am sure it gets cooler in winter, but in 33 degrees, it seems a bit odd.
That all said I seem to have spent the day planning Turkey, some work things and other trip related admin/research. 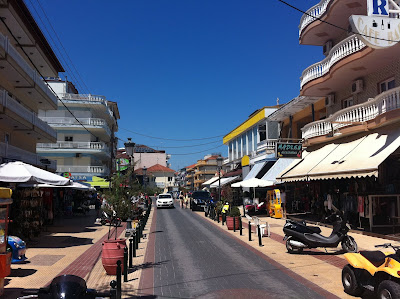 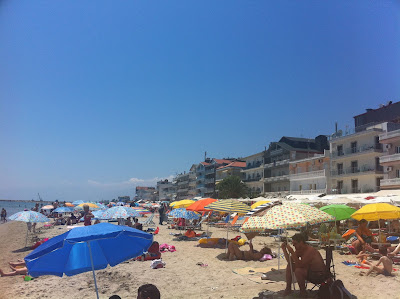 Posted by Unknown at 8:29 AM No comments:

Found a first class campsite, that was more of a holiday resort. Friendly staff, particularly Maria in reception who spoke excellent English. A very well run place that was clean and had a pizzeria by the pool. Saved troubling the Colman stove etc. Slept like a log till this incredible racket at 3am woke me. Thinking that this huge engined thing was going to run me over, I got out to see that it was a tractor with a spray machine, dowsing the numerous hedges with insecticide. I found out that it had to be then as that is when the mozzys settle.

It was a short run into the town and found a ferry booking agent almost immediately, I had allowed an hour for this, so this put me ahead of the day. Alas no cabins left, so an airline time seat was the next best thing.
With 6 hrs to fill, I parked Batty by the train station and wondered into the centre/port. Great town that has many echoes of the Romans. In the museum it tells how it use to be their eastern Mediterranean port that many a campaign launched from. Next to the museum was the cathedral and there was a wedding taking place, so did not venture in. The side door looked right into the service and this beautiful bride in the loveliest of dresses was kneeling taking her vows next to this thug of a man... Mafia I thought, rather ungenerously.
After lunch found Internet cafe right  by where I had left Batty and caught up a bit.
Yesterday and today have been the hottest day of the trip so far, 31 degrees I saw on a sign. When on the move, it is fine, but wearing all the armor etc when one pulls up, it is a sweaty business.
At the docks have had the pleasure of meeting Paddy, a 70+ year old retired architect biker from Waterford in Ireland. He is on a 6ish week tour of Europe. He is having a great time, largely staying in youth hostels. It is his 45 wedding anniversary tonight, and poor chap has had me across the table as his wife is minding the fort back home. 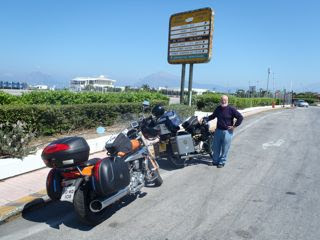 Also on the boat, who we met queuing for the boat, about 20 Vespa owners from Sicily making their annual tour. Great guys of all ages, who love their bikes and a fun time. They were mighty perplexed by Batty, but she won them over quickly enough.
Bye bye Italy, I have loved nearly a thousand miles of your roads, your fabulous hill top villages and towns, rich history and architecture ( what little i saw). Alas I did not found you the friendliest bunch, although the exceptions were lovely, I guess had I spoken your language it would have been a different story. I was a surprised that the Pizza is your national dish, far more pizzerias than UK tandouris, let alone pubs, they were on every corner and in the tiniest of village.
Posted by Unknown at 4:59 PM 1 comment: