The thing about reading a good book is that it fills one's head with pictures of somewhere. Tiger Hills by Sarita Mandanna is just such a book and as opportunity allowed me, I left Goa for the Coorg Hills a couple of days south. The book is set over a hundred years ago and is a sort of a 'Thornbirds' of India and runs over 3 generations. The depiction of amazing landscape, lovely climate and beautiful people did get to me and I couldn't wait to see it.

It was not everything that my imagination had conjured up, but very beautiful and lush. Unfortunately the rains got me both days that I was there which tampered my feelings a bit. 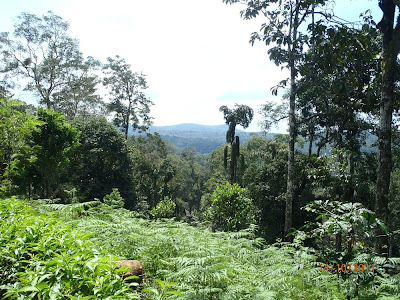 I didn't take that many shots around Coorg, but this hints at this lovely place. There are loads of tea, rubber and spice plantations

I loved Mysore and the Palace there is worthy of any journey. Made from materials and fittings from around the world and the paintings of all the State occasions, depicting thousands of actual soldiers, local ministers and Royalty, as well as all the Colonial officers from England,  were just amazing. It was rebuilt after a fire at the beginning of the last century and must have been a wonder of the 'palace' world at the time. 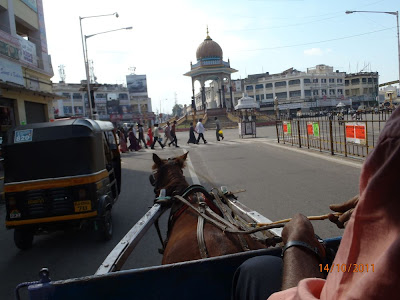 Couldn't resist a carriage to the Palace 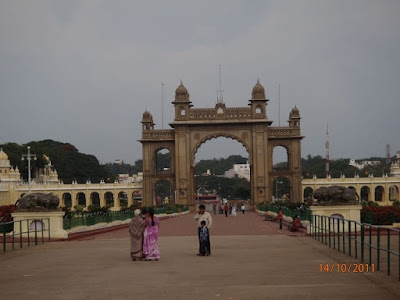 One of the Palace Gates 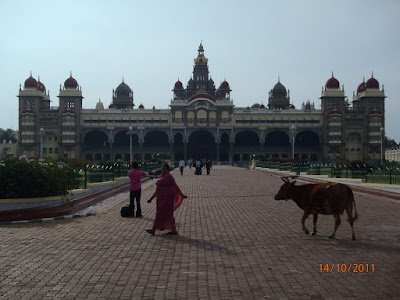 The front of the Palace 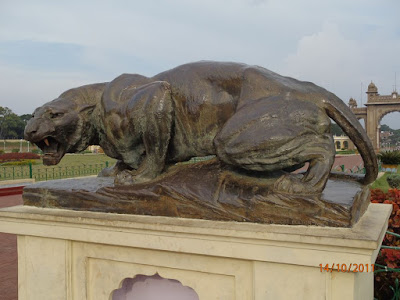 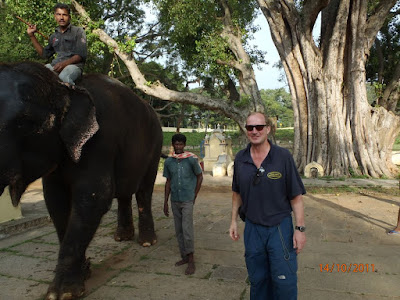 I was trying to leave by the wrong gates apparently, and the guard said that if I wanted to see the Princes' private Elephants I could do that and then leave by the 'wrong' gate. So I did, and they were lovely elephants that made me a little nervous. It was a way that the Guards and the keepers made extra money on the side. My 200 rupees, had them grumbling I am afraid.

Ooty, isn't that a fantastic name for a town. It is about a day's Batty ride south east of Mysore and halfway to Cochin.

The road there starts through the great plains around for Mysore and the rises sharply as one enters the Mudumalai Tiger Reserve in the Blue Mountains National Park,  Western Ghats.  I stopped to get a few snaps at one point and got back on Batty when she just felt weird, sort of floppy as I took her off the stand and took hold of the handle bars. Flat tyre I thought, nope, nothing to see. Must be my imagination I thought, so I moved off. But there was something very wrong and I pulled up after a few yards. Off I got and went around the bike wobbling the handlebars as I went, and at last I saw the problem. The 2 frame bars that come down from under the tank and then under engine had completely sheared apart and the only thing holding the engine in place was the added on crash bars. 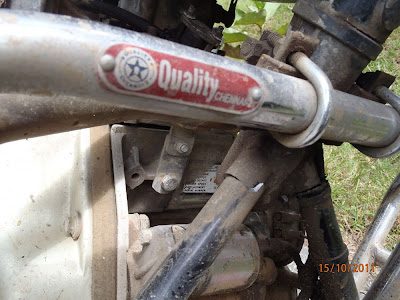 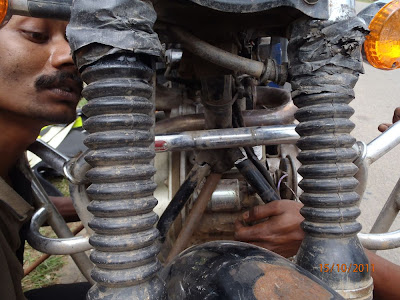 I asked the inevitably gathered throng where there was a welder locally. A walking pace ride to the next village 5 miles on found one and he did a great job. I asked for some extra strips of steel to be welded on to strengthen it all the more. I doubt and assume this break will not happen anywhere else again. The roads for the last 3 months have been very hard and the non stop banging and vibrating have taken their toll. I guess luck played it's part by the final failure happening at a very slow speed and the proximity of ever ready welders, who have now helped me 4 times. Each time the charge is £2-3, which immediately redeems any feelings of frustration etc. 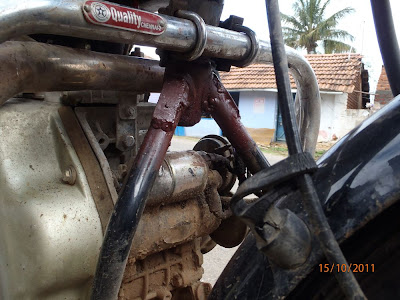 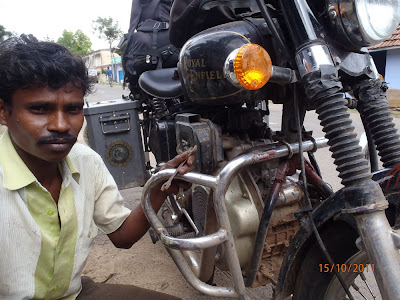 This happening also brought happy circumstance as it forced me along a quieter and less direct road to Ooty, which turned out to be the one I had heard tell of for it's beauty and with a climb to 2000m through what must be a near world record of 36 switch back corners. A great ride up through tea gardens and the like,  but half way up the heavens opened and I got my now customary afternoon soaking. 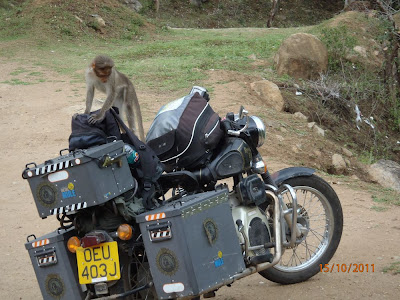 I think he realized there was no room for him on the back...nor any snacks. 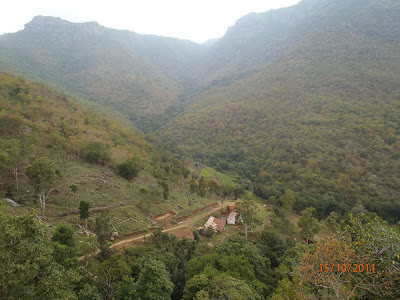 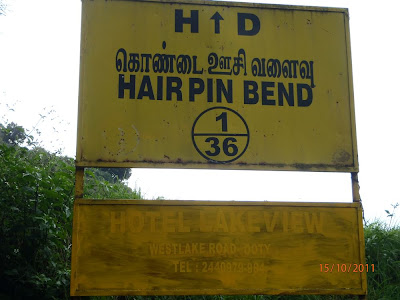 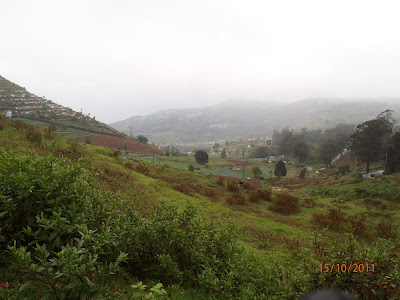 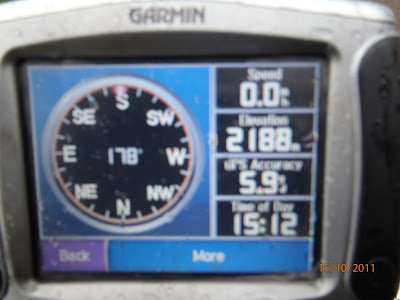 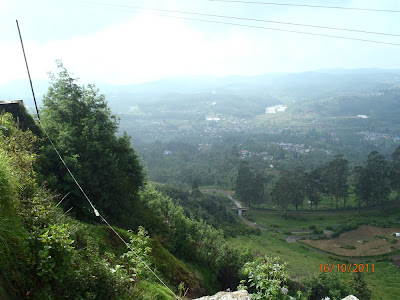 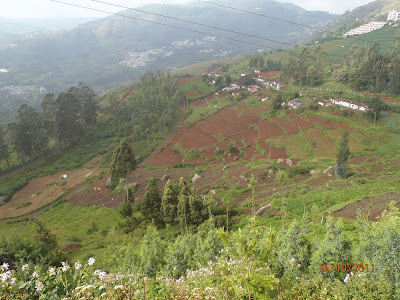 Ooty was rather like Shimla, and had many echos of colonial planters in the town buildings. I found a nice but damp hotel and rather went to earth trying to warmed up under the extra blankets that I had requested. I really have not got the timing completely right for biking here, not that I can do anything about it now, and the guides do say October should be a good time. On the up side it has meant that I have not had to compete with thousands of other tourists, and it also means I will be in SE Asia for prime season, so I hope it all balances out. On the down side I have got wet quite a lot.

Our next quarterly meeting for work was coming  up so I set off for Cochin where I had booked a supposed good hotel with a strong Internet connection. A few days of catching up and then a very good meeting had me back into work mode and all the exciting things going on are quite a pull, but it is amazing not only having great colleagues, but also what you can do sitting in a beach hut miles from home and still hopefully be useful.

The other big draw to Cochin (Kochi) was my favorite Tea trader was there on business and we managed to have a dinner or 2 and spent the weekend catching up. She also replenished me with a replacement iphone, sim cards,  and maps etc the list is long but invaluable. 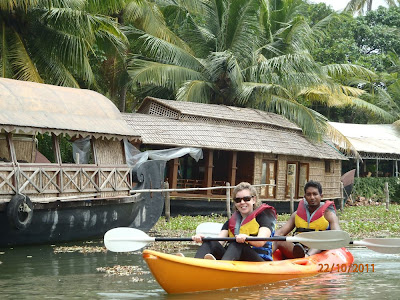 A bit of Kayaking on the back waters 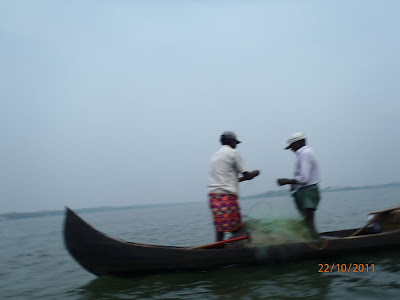 Fisherman standing up sorting out their catch in these tiny unstable boats...years of just doing it I suppose.
It is a great city and the Fort Cochin area is a heady step away from the norms of India and combines a lovely cocktail of multiple European architecture harking back 400 years, lovely shopping, fab
restaurants and great boutique hotels. 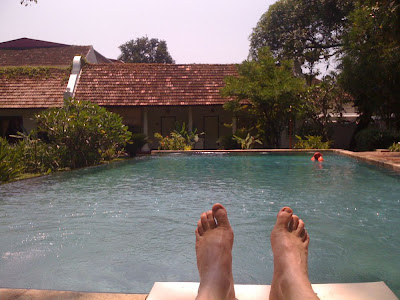 Well it was just one day, and I was seeing if the camera on my replaced iphone still worked 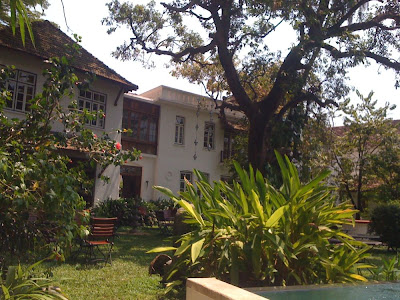 The lovely Old Harbour Hotel that Sophie was staying in

I have been to Cochin before with Caro over Xmas 2006, it started off as a brilliant holiday which we were both enjoying immensely, but suddenly it turned and all the horrors of the Tsunami on the Boxing Day ruined so much for so many. The local damage was significant with 100s of local fishermen killed, but nothing like what Sri Lanka etc (where we had planned to go on to) had suffered. Anyway, not that anything seemed important to us by comparison to the scale of things that others had to deal with, we saw a lot less of the town or the back waters than we had intended.
I seem to have a number of friends in the travel business and that holiday was put together by Fiona Brijnath, who I went to six form college with in Exeter. We were both doing a business studies course, after which we shared a flat together in London. She took the traveling route and I the illustration agent one. Her excellent firm, Far Frontiers, is the sum of her own extensive travels, a few years at Abacrombie and Kent, and then Steppes East. Much recommended for the discerning traveler, it is her quality and friendliness of service, which is only surpassed by the glorious places she sends you.

I write from the El Paradiso guest house in Thekkady. I was recommended to it by Antony the tourist driver at the hotel I was staying in Cochin. I had 3 days to get 180 miles so it was great idea to come to the Periyar Wildlife Sanctuary. My plan to spend a night, go off on a 1/2 day trek and then head on collapsed as the morning trek was in the clouds and rains, so there was nothing to see really and returning to the GH soaked and covered in leaches persuade me spend the rest of the day here and catch up. 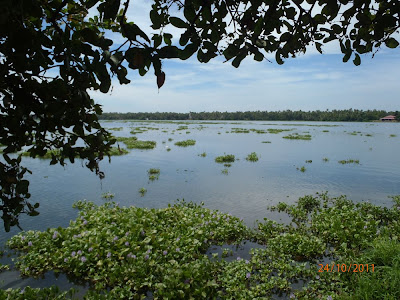 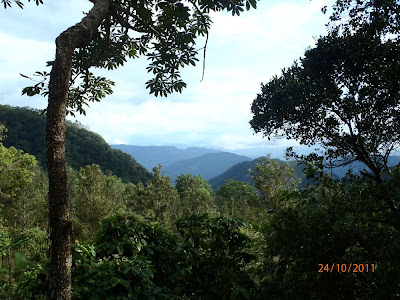 Some shots on the way to Periyar 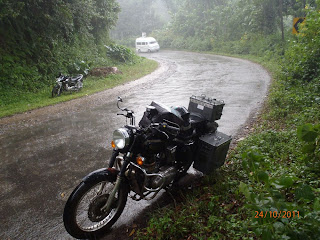 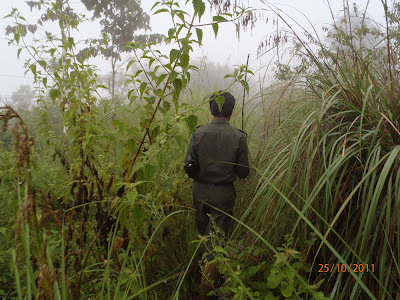 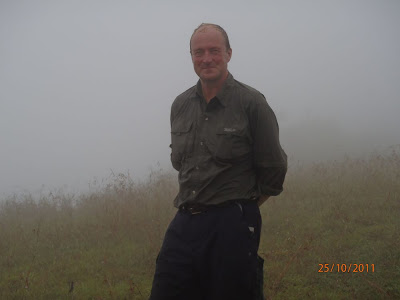 Soggy at the top 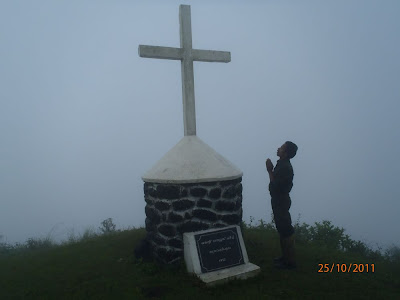 My guide, Augustus,  praying at the top of the hill he had taken me too. There was so little to see that he and I talked about arranged marriages, church, politics and how little he earns...a regular guide topic and a way of reminding you to tip them, I guess
I had only met a leech once before and that was about 10 days ago when in a down pour on the bike I felt something moving about on my lip. I thought it was a bit of material from the helmet strap, and kept trying blow it away. Eventually I had had enough and stopped to re adjust things. That is when I saw what it was....luckily I had bitten it in half so it was sort of dying, and I never found the other half.
Posted by Unknown at 5:44 PM No comments: