Mexico part 2, Tequila, Morelia, Acapulco, nudists and being ripped off like a good 'un

This morning I had my 1st Spanish lesson, 4 hours in the strict but friendly company of Vicenta. I am quite convinced that she is a far better teacher than I a student. In fact I'm writing this having taken a break from my home work which takes the form of over 200 words and phrases that I am encouraged to commit to memory and pronounce by tomorrow….fat chance. It is nearly 30 years since I was troubling a schoolroom and I'm afraid my end of course results may be a little wanting.

The good thing is that I am living with a friendly Spanish speaking family in the middle of this beautiful town called San Pedro La Laguna. I will furnish the blog with more photographs next time round, as it has been a bit cloudy since I arrived yesterday.

My last post had Batty and I arriving on the mainland of Mexico. What a change from the desert and high temperatures of Baja California. Immediately it was lush green and prone to a daily deluge of rain. This seemed to be a fairly predictable occurrence in the afternoon, so a little planning or acceptance of the fact was all that could be done.
A couple of things have happened that have really made me question my competence. Firstly I left my passport on the ferry. It had been the exchange for the cabin door key, and of course when I came to leave, in all the rush and excitement of arriving in Mazatlan, I just left the key with the cleaner who came to my cabin just as I was vacating. The boring thing was that I only discovered it 180 miles down the road, which at Batty speed is 6 hours.

The next thing that happened was that I got done over like a good'un at the Talisman, Guatemalan border. Basically I fell for one of the oldest tricks in the book and handed over US$160 to my “fixer" who was helping me through the rather vague import procedure. He asked for this money to buy the permit to drive in Central America. Although I questioned him vigorously, he persuaded me that it was essential to drive any further. Off he toddled to get the form, whilst I was kept occupied by his conniving pal for half an hour. When he got back he had all the paperwork and rushed me through the final gate saying he was about to close. Of course at this stage I was none the wiser, and thanked him profusely giving him a generous tip on top of his US$20 pre-agreed fee. Again it was at the end of the day, after 5 hours of steep mountain roads that I thought I better put all the paper work in the right folders etc. To my horror my more thorough look at the receipt showed that it was 160 Quetzales, about US$20. Of course I was livid, with myself as much as anything, and planned to head back the next day to confront the rascal. After a night's sleep I realise that there was very little proof and the chances of him being there for the next month was highly unlikely, as it amounted to several weeks pay. Why is it that some of the most lovely countries in the world, are so let down by the treatment dished out at Borders. I know it is up to the individual to look out for themselves, but in saying so, it has to be in the interests of the country at large to try and safeguard visitors from robbery, particularly at an easily policeable spot.

However there are some situations which one does not anticipate, or a natural tendency to trust, just trips one up. I guess it means greater vigilance and stubbornness in these more poverty stricken countries.
One tries to create as many routines in an ever varying circumstance, to help against forgetfulness etc. For instance I always put the same things in the same pockets, I have a bike packing procedure and a mental check list when leaving a hotel.
Anyway these are just a couple of black moments in what has been a most enjoyable and fulfilling Mexican time. I very much look forward to returning there at some point, as I know the surface has only just been scratched. It hasn't been a particular place for meeting new people, but those I have have been delightful, helpful and entertaining. 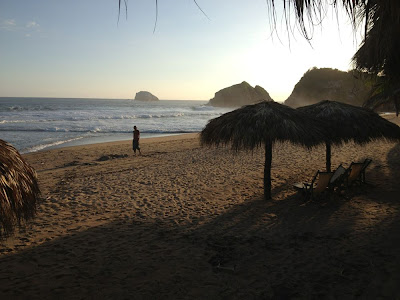 You only have to mention going to Mexico, and in particular in America, to get an incredible amount of advice about the inevitable dangers that one will encounter. None more so than on the risks of the road. I did not find them to be any worse than anywhere else in particular, and in fact the toll roads which I occasionally took were world-class. The other roads may have had a few more potholed than we're used to in the West, but certainly at the speeds Batty and I go along at, we were not caught out. That said they do have the incredibly effective speed reducing trick which is to have huge speed bumps at every junction and particularly in towns and villages. Known as “Topes", they are not always marked and early on a few times Batty gave me one hell of a buck, that had me airborne and hanging on for dear life. One quickly learns respect and copy the practice of the locals who just very slowly creap over them.

Yesterday was a challenging riding day. By the time I had left Quetzaltengo, where I had stayed and was able to return my Carnet (the sort of international vehicle passport needed in many of the countries I've been to, but not the Americans) by courier to the RAC, it had started raining. Not a problem I thought as it was only about 60 miles to San Pedro. Minute by minute we climbed many thousands of feet up the side of what is a huge volcanic crater (I am assured it is benign, unlike the one blowing its top 100 miles away) on steep twisting roads. It was a lot of 1st and 2nd gear work, but the horror was coming down the stunning road into the crater to the lake and San Pedro where the roads were incredibly steep and twisting. I know for a fact that I won't be able to get out of here. Much to the amusement of others, the only way Batty could make it up the final hill into the town was by offloading all my luggage boxes etc (about 50 kg) into a passing rickshaw.
Urgent messages to Henry in England for a smaller front sprocket have been dispatched, and I'm hoping by the time it comes to leaving I will be more appropriately geared for the many mountains to come in South America…and to escape the classroom, armed hopefully with a bit more lingo.

A few Months back I was in touch with Andrew Charnley, who was planning a similar trip to mine and on a diesel Royal Enfield. In fact his plans changed and is taking a Scooter. He is writing a good blog and has interviewed me about the trip, the planning, some technicalities and practicalities. Here it is: http://www.andrewcharnley.com/?content&module=read&id=337
Posted by Unknown at 10:11 PM 2 comments: