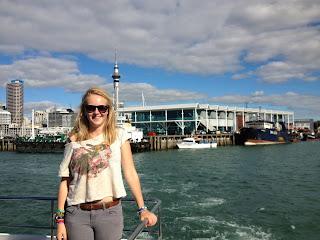 We met as planned and I couldn't help telling Lily where we were going as we approach the tower. Her excitement at the idea was clear to see and appeared to match my own. However as we went to the lift that hurls you up hundreds of metres, I completely lost my nerve much to Lily's bewilderment and my humbling horror. I was completely taken by surprise by this sudden terror, I had booked it the day before without a second thought, but I just froze. Looking back it was a stupid thing to have done, I had forgotten that heights can disabled me, and I had got swept away by the splendour of the idea. At least Lily went up and had a good look around before we found a comparatively dull waterside restaurant for lunch. Ironically had I had half bottle of wine before going to the tower, I am sure I would have made it. What a plonker.
The day was rescued for me at least, by Lily's good company as we boated around Auckland's harbour.
Posted by Unknown at 12:47 AM 5 comments: