Email notification resumed....3 or 4 posts have not been emailed out....aaaaaaaargh

If you have been receiving the blog up dates via email, I am afraid that very annoyingly the email thingy that lets you know of a new blog post, has not worked for about 5 weeks apparently. I have been playing around with it for a few days and it appears to be on again. Apologies on behalf of Google and if you want to see what's been going on for the last few weeks, please go onto vegibike.com

In the meantime this odd picture is in fact a soon to be total eclipse of the Moon that I am witnessing here in Pokhara, Nepal 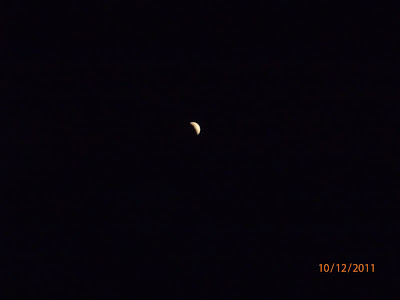 4 day trek in around Panchase. Making alcohol, tug of wars, and party

I write from the Kathmandu domestic airport. What was meant to be a quick in and out day trip 2 days ago, has become a 3 day exercise. In order to get the new engine cleared of customs, because of an unexpected and tiresome nonsense as a result of me giving Raju's, the mechanics, address for delivery, and because his business does not have a registered number, it prevents delivery. All the flights were cancelled due to fog, so the next day I got away to sort it out. That was not too much trouble but alas the return flight was cancelled, so I was booked on to one at 8am the next day. It is now foggy, so a few hours sitting on hard airport benches whilst the sun breaks through, gives the perfect opportunity to catch up on the blog.
I would add that with the benefit of that cheeky thing called hindsight, it would have been quicker to have got the day long coach ride there and then a day back the following day, but the enticing 25 minute flight option won over my green-ish flying concerns. The views from the plane of the Himalayas were fabulous.
The trek up to Panchase (5 peaks just south east of Pokhara) was a great break from the cities. My guide Yam was a jolly chap who spoke goodish English, was about my age and went at a pace that this saddle bound exerciser could manage (I have put his details at the bottom in case anyone wants a guide here). We were blessed with stunning weather on the first 2 days and had on our right a spectacular view of practically the whole Annapurna mountain range. It was just like the best poster shot you could wish for. The range is centered by the sacred mountain called Machhapuchchhre which no one is allowed to climb. It is beautiful.
We tended to do 5 or 6 hours each day,  it felt mostly up hill but of course there were steep downs as well. Every turn brought new delights and any aches were soon forgotten as jungle switched to and fro with gorgeous paddy fielded scapes.

The first night was in a happy but tired guest house. The second and third in a completely charming, clean and stunningly situated place called Happy Heart. Run by 3 sister from 55 to 40 yrs old. One hears of the hard working women folk here, and these 3 really exposed me to it. Up at 5 and not stopping till 10. When they are not cooking delicious food on the open wood fires for their guests or sorting out the immaculate but simple rooms, they are collecting and chopping wood, tending to the veg garden, working with their 6 buffaloes in the paddy, or walking down the hill for 2 hours to get supplies... And then back up again.  This all done with great humour and efficiency. 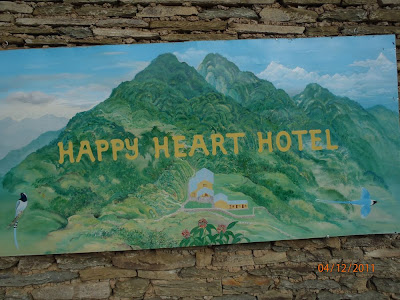 The only married one is the eldest ( I am afraid their names escaped me) and her husband is Larry. He is a Canadian who spent 40 years in an ashram in India, before moving to Nepal a few years ago. He is doing a lot of work on the spirituality and lost meanings and teachings in the area. All interesting to hear but I am afraid that his repeated insistence that we were the same age confounded my vanity. It had already taken a bashing the week before in the East when a chap wanted to play 'guess my age' and he thought i was in my sixties, the brute. So when Larry started, who is 20 years my senior, the repeated hints that I was on a MID career sabbatical, or I was BORN in the mid Sixties had no effect on what I put down to the on set of senility. He was a nice guy really and we made Raksi the next day at 5 the next morning together....well I just watched this great art which has not changed for thousands of years. They make about 3 litres a day. Raksi is a locally distilled millet liquor that, when good, is very like sake, which is a fav of mine. After 2 good glasses of warm Raksi a good night is guaranteed. I would go so far as to say that those nights were some of the most contented and the best sleeps I have had on the trip.

The youngest sister and I called each other darling, after Yam suggested that we got married. I wish I had taken photos. I have this knack of forgetting to when I am having fun sometimes.

Al and Jess Howard had suggested that I try and get to what they call the Highland Games in a village called Galam. Yam was very happy that we should do it. It was a 3 hour down hill walk from the guest house, which rather filled me with dread for the return. There were about 12 non villagers who had come along with Al. It was the 7th year that they had come along, having happened upon what is really like a village fete whilst paragliding.

Much to my surprise the feared walk back up to the guest house took the same time as going down, and the last half hour was by moonlight, which was great to do and I think it being dark made the uphill stretches seem flatter.
On returning to Pokhara, and a welcome shower, an email from Annie was waiting for me. I had not met her, but her mother is a friend of my step mother's and contact details were exchanged. She was on her last night in town before heading off to SE Asia, and she kindly asked me join her and some friends for supper that night. It was rather fun being surrounded by 6 lovely girls aged between 21 and 31. They had or still are all doing voluntary work in orphanages here. Slightly frustrating for some of them, as they have a 9.30 curfew, so left Annie, Zoe and I to a few more drinks at the bar.
The following night there was a birthday party at the Bullet Basecamp Bar, which was great fun. A melting pot of other biker travelers, expats, and locals.