Video leaving Battersea on the first leg to Devon

Here is a classic Peter Gray video...true Dimbleby, or is it Palin, style?

WARNING, this post contains absolutely fascinating and brilliant information for those interested in engines running on vegetable oil. For those whose fascination is not so profound...you could skip it, I am sure later posts will be softer and more human feeling stuff...all those good byes etc....

When I set out on this adventure, I was persuaded from my own research that running a diesel engine on vegetable oil would be fine, maybe a few starting problems when cold, but otherwise just as normal diesel fuel. The truth is that this is the case in part, but after 2000 miles of trials I was suffering from increased starting problems and lack of power. This was coming to a head about a week ago and I was beginning to despair for the venture as a whole. My mind was racing for solutions, such as mixing petro diesel with vegetable oil and therefore compromising much of the essence of the journey.

A week ago I was having lunch with my cousins in Kent, and this anxiety came out. Then Andrew suggested that I spoke to Paul Day who they had been supporting in his business venture. Andrew described Paul as a scientist who was developing products and systems for running large-scale generators and engines on bio diesel and the like.

This led to me visiting Paul at his office and workshop near Sittingbourne on my way home. As a backdrop Aquafuel  have been awarded many times for their innovative and successful development of  engines and power sources in both environmental and highly efficient ways.

After a short meeting it soon became clear that I was heading for a serious problem, which would have probably meant the engine failing in a few thousand miles. The thing about vegetable oil is that it is much more corrosive than petro diesel and also because of its viscosity, ignition relies on the oil being hot and fluid enough as it enters the combustion chamber to fully ignite.

So there are two things that needed to be dealt with. The first was the rapid deterioration of normal engine oil when using vegetable oils,  almost immediately apparently there is much greater wear on the engine components as well as congealing around the piston and rings. This has been overcome by using an incredibly high quality oil that is only available, at the moment, for use in large-scale plant. This oil is so robust that Paul thinks that it will take me halfway around the world before I need to change it. He is looking into this further, and has said that he will be able to courier a supply to me when the time comes.

The second problem is how to get the bike to start on a fuel successfully without it coking up the injectors in the cylinder head.
The solutions are either:
- to have a dual tank, one being for regular diesel or bio diesel, which one would start the engine on and once hot, switch to vegetable.
-  to have a heater that will bring the oil up to full ignition compatible temperature
-  to mix in 25% diesel fuel with the vegetable oil.

Had I known this I would have had a combination of the first two solutions, all of which Paul would have helped develop scientifically.

So it looks like I'm going to have to use 25% diesel fuel. This is sad but unfortunately the ticket is booked and I'm leaving in two days. It would not have taken much to have changed it and it would have been a matter of a few hundred pounds to have made the bike almost 100% vegetable oil fueled.

I might look into having a tank made with one part for vegetable oil and a much smaller compartment for bio diesel, this would save the day a great deal.

I went back to Aquafuel yesterday and I spent an hour or two with David, who is an engineer working with Paul. He showed me what was involved in cleaning out the injectors, which will need to be done every 2000 miles approximately to keep it running well. I learned so much about the engine in those few hours that my confidence in this element of the journey is 10 fold by comparison to what it was before.

As a further bit of most unexpected and extremely generous sponsorship, Paul has waived the charge for their very valuable time setting me up, wishing me every luck along the way. I am very very touched by this and I know Batty is loving her new oil  and will run forever.

It has made me think that there is a business opportunity to be had providing a solution to the problems that Paul has solved. It would involve the small unit supply of the special oil in 1 L containers, a heating element system for the vegetable oil, and possibly a dual fuel switch and tank for motorcycles.
Posted by harryls at 10:50 AM 7 comments:

Tucked up in a goose down sleeping bag with a very comfortable integral sleeping mat, secure in a fabulous 2 man tent, rewarded this soon to be tent dweller with a great nights sleep.....Right up until the planes started coming over at 6am, drowning out the busily chirping black birds and my friendly robin who always says hello, when I go into the garden. I had forgotten one of the main reasons for getting the house double glazed was the dawn to dusk aircraft...the sooner Heathrow moves to the Thames Estuary the better for many Londoners.

I have not sought any sponsorship for this trip, but have been knocked out by the generosity of Big Agnes who make the tent and sleeping bag that I am taking. George Bowie, my fellow EO forum mate, has set up a new business, Nine Point Nine, supplying those who want the best kit for all things out doors. His offer of the kit turned into Big Agnes saying that they would supply it for free, if I let them know how it performs on the trip.
5 stars so far. The products are very light and seem super tough. With Big Agnes coming over to the UK, the likes of Eurohike will have to be upping their game to compete, and by some measure.
I am not a great Tent expert, but my brother George is as about as expert as you get, having run the south west's premier marquee company for the last 20 + years with his wife Fiona. A big shameless plug for The Devon Marquee Company.
Posted by harryls at 9:18 AM No comments: 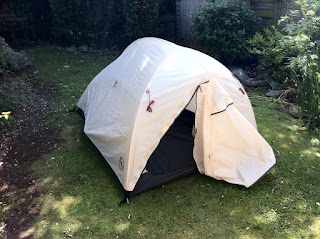 I am testing my new tent tonight. Not very adventurous being in the garden, but then better to do so than hundreds of miles away.

Big Agnus is the brand of tent and it took just 10 mins to put up, and that included reading the instructions. It is a great tent and I have my pal George Bowie to thank.

I will post tomorrow on how I slept and also how this last 10 days have been, pulling all the last bits together for the trip, all the good byes etc.
>

Posted by harryls at 6:51 PM No comments: