Apparently a typical time to start a party in BA (Buenos Aires). It was Saturday night and after a day of writing the last blog and doing a bit of tourist stuff I made sure that I had an ample siesta that evening to accommodate these late hours that seemed to be nothing but the norm.
By 3:30 AM it was time for me to go after a jolly evening, certainly on my part however requiring most of the conversation to be in English did make it a wee bit more taxing for my fellow guests, although they all seem to speak English near fluently. I was the to second leave, apparently Maria and Alex got to bed after 7 AM, again the norm.
It was the second gathering that I had been kindly asked to marking Maria's 26 years. The first had been at her mother's apartment in central BA, which is great fun but a little earlier, starting at 9:30 PM.

I always enjoying going to art museums, BA has two excellent ones, one modern The Malba,  and the other The National Museum of Fine Arts,  and enjoyed what remained of the following day in amongst fabulous collections largely from an era when BA was one of the richest capitals in the world during the 1920s. 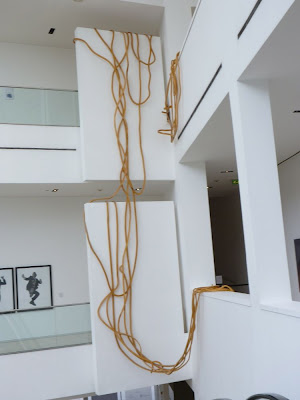 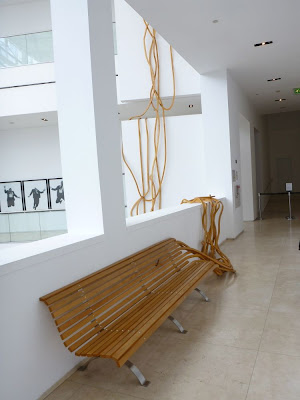 I had met John on my previous visit to BA, on the free walking tour. We had exchanged numbers and met up to do some further sightseeing. It was my last day there and he generously said that we would do anything I wished. He had been in the city for a couple of months, and had another month to go so was on a pretty relaxed schedule. One of the most visited spots in the city is the La Recoleta Cemetery, where many of the great and good from Argentina are laid to rest. It is remarkable for its architectural extravagance and variety. One thing you quickly realise is that almost every name on the tombs are also the names of streets in the city.

Wanting a moment's respite from all the delicious yet non-stop abundant meat, it was suggested to go to Chinatown and have lunch there. This we did enjoying soups and noodles of the same quality that you would find in any Chinatown around the world. John is very good company, having spent a life time in the US education system and teaching extensively abroad, his world knowledge and variety interests made for an enlightening day.

Back in Misiones with Alex, a couple of days later we caught up with Georg and Jacek, bike travellers from the Panama - Columbia crossing. They were going to the Horizons Unlimited meeting in Iguazu and were drifting around that part of the world for 10 days. We had a fine dinner and the next day I left for Brazil, intending to head towards Rio.

However once in Brazil I did some sums and worked out that there was time to join them at the meeting, so dropped Georg and Jacek a line suggesting we met up. This was agreed and a day later we had hooked up in Brazil and spent the next week camping and slowly riding to the meeting. It was the first time I had actually ridden with others on the whole trip for anything other than a few hours, and was great fun. Of course there was a bit of a miss match of speed, they having machines with 10x the horse power of Batty,  however they tended to  stop after a few hours riding and was never more than a few tens of minutes before Batty loomed into view. 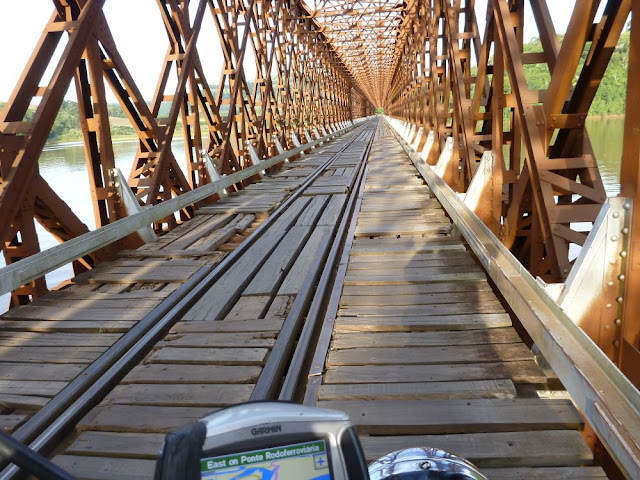 One interesting incident was being stopped by the police. Documents were pleasantly demanded, however my driving license turned out not to be valid without an international license. I hesitated to show the out of date one that I still had, but did in the end and they were 'just' ok about it. Subsequently having taken advise from my fellow travelers, we set about 'ageing' the out of date license so that the expiry date was rather obscured…..

The south west of Brazil is a lovely area…pretty rather than spectacular, and reminded me of West Dorset or apparently areas of the Black Forest in Germany.
Spending time with these 2 was great fun. They are both married and have families in Switzerland and Poland respectively, and get great support from them whilst on their journey. Jacek has a factory in Poland making socks and supplying the likes of Tesco in the UK, and George ran a top notch men's clothing chain in Switzerland until it was sold a couple of years back. So we had an amount in common in terms of business and managing things whilst on an extended journey.


They had been traveling together for much of the last 4 months and had camping down to a fine art. Georg at the stove every night creating delights and Jacek, with a new helper, at  the washing up. We all needed wifi and found campsites with a degree of access. It was a rather charmed life for those days.

On the final day's run to Foz do Iguazu where the HUBB meeting was, I had 2 punctures. The first from a nail, the second from a badly fitted inner tube…a rather frustrating time, but got to the meeting place 4 hours after Georg and Jacek, where they had cold beer awaiting.
A consequence of numerous knocks and bangs over the miles lead to the rear brake to collapsing, quickly followed by 2 of the 3 seat bolts riping out of their metal brackets just before Foz. Help was at hand in the form of Rodolfo, who was running the meeting, with an introduction to a  mechanic. However it was Easter weekend, so had to wait for the Monday before anything could get done.

The meeting was a good gathering of like minded and interested folk…not a huge number, but the highlight for me was riding across Itaipu dam, a hydro electricity plant that provides 17% of the countries electricity. 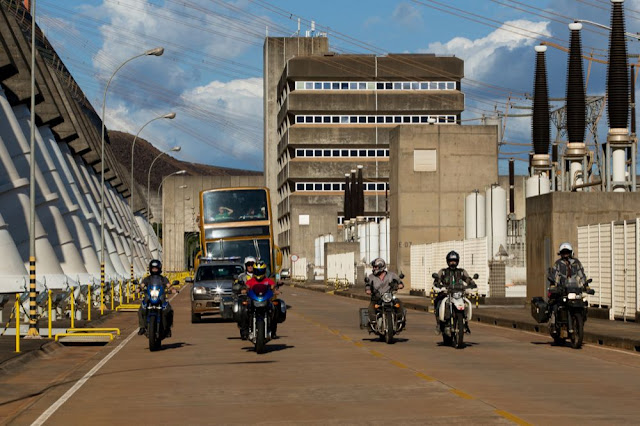 Batty is back today, Tuesday after the full treatment from Luciano and Naldo at G&B motors. Several new parts milled and turned for the rear brake and a near as dam it new seat, all at a price that would leave western mechanics in a state of shock.

Tomorrow is the start of a 3-4 day ride to Rio. I am beginning to sense a slight de-mob, or end of term feeling as the last weeks of this trip begin...a lot of happiness at the thought of seeing all my old friends and family again after such a long time, coupled with tinges of sadness at the end of a life of constant movement and daily new discoveries.

Posted by Unknown at 3:13 AM No comments: