I wrote this post a week or so ago, and it is only now that I am in Argentina that my connection is sufficient to upload the photos

One of my most frequent companions on the road are large tourist buses (think National Express or Greyhound), that whisk many thousands of people every day around South America. For the most part they are generous road users, and give slow-moving motorcyclists ample room when they overtake. It is not always the case, but that is the nature of the twisting roads in most situations, rather than casual driving. Anyway it was interesting to be a passenger and they set these buses up with almost airline business class type seats, so the journey is actually pretty comfortable. 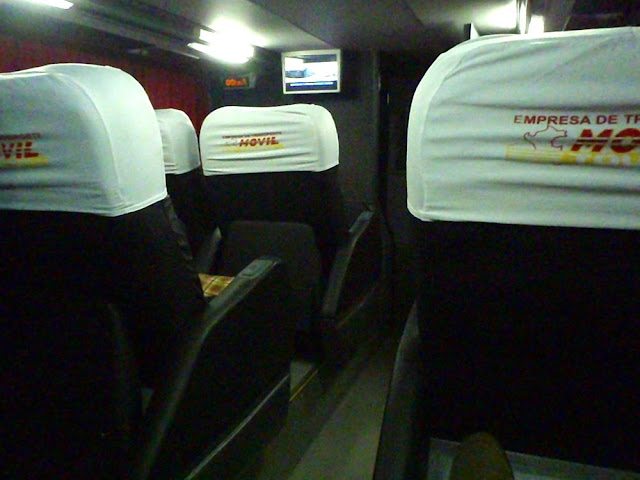 I was on my way overnight to Puerto Maldonado in the Amazon, from where we took a two hour boat ride up the river Madre de Dios to the camp. I think my imagination was that it would be quite a small establishment with a few fellow guess. In fact it turned out to be more like Butlins on Amazon. Capable of housing 200 guests and organising it in quite a regimented way so that we were all  fed  at very specific hours, with a very defined  tour routines etc. I say this only as a reaction to the independent and self determining nature of my usual journeying habits. That said we were given a fantastic trip into the jungle and exposure to lots of creepy crawlies,  mind-boggling scale of trees and fauna, abundant birdlife and lots of Caimen (an alligator type creature). It was three days immersed in a situation new to me and very enjoyable. My fellow guests came from all over the world and their society only added to the experience. 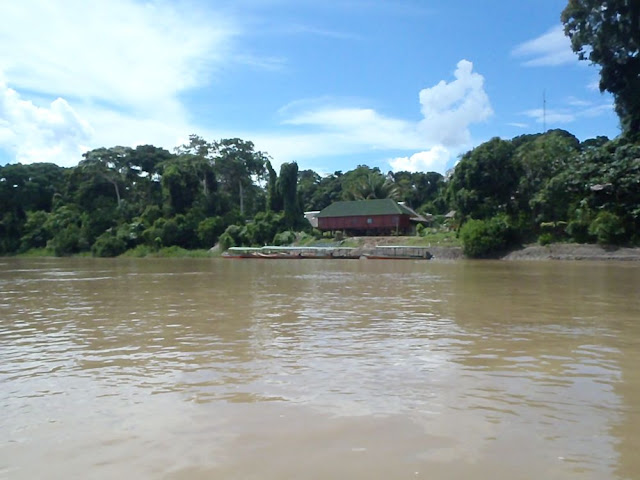 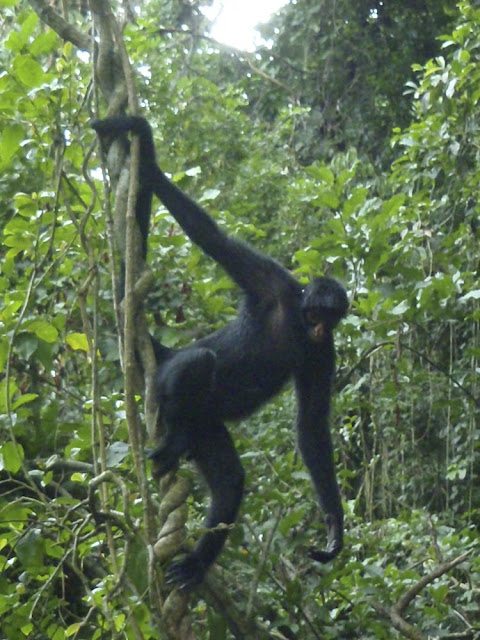 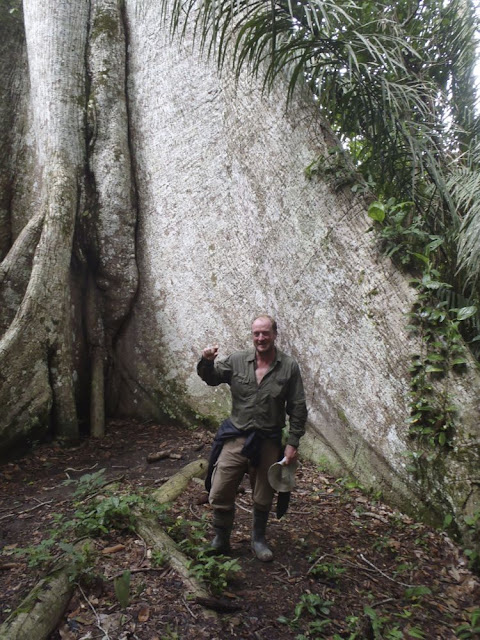 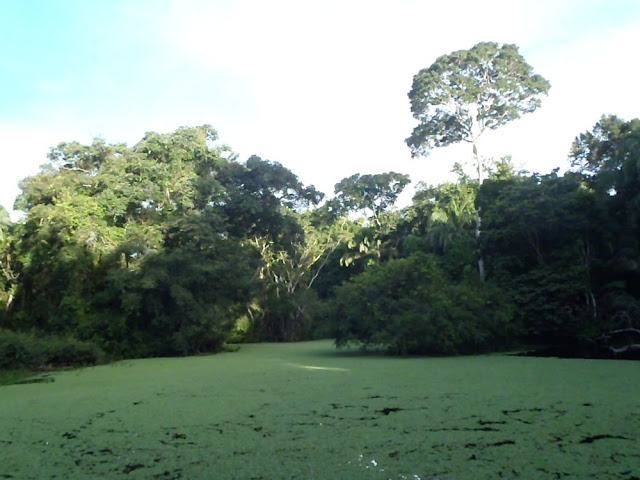 When I got back to Cusco, off I went to Paddy's Pub, where I met Glen. He told me he had organised his friend Christo, with a taxi driver, to film us both on the way out of Cusco the next day. This was mainly for Glen's ongoing documentary production, but something Batty and I were more than delighted to be involved in.

I had a date in the diary meet up with my second cousin - once removed, Leo, in La Paz, which was a couple of days ride away. The route takes one past Lake Titicaca, the world's highest large lake at 3800 m. Maybe I should have spent a little bit more time there, and visited the famous inhabited floating islands. However what with a slight push on time, and a number of accounts from fellow travellers that it is only a tourist destination rather than a living and working community put me off. That said when I got through the Bolivian border (probably the easiest and most straightforward border that I have come across so far, only taking half an hour) I did go to Copacabana, which is a sort of resort on the bank of the lake and adjacent to the ISLA DEL SOL,  which is the birthplace of the sun in Inca mythology. This rather captured my imagination, so I did spend an extra day and went to visit the island. The boats leave at about 8 o'clock in the morning and one is disembarked two hours later at the north of the island. There is a five-hour walk around it, with various Inca remains en route. It is pretty tough going given the altitude but a struggle worth having. Its name ISLA DEL SOL, had no resemblance of truth during my day there, and in fact it bucketed down most of the day.


The drive to La Paz was mostly over high flat plains that did not engender great excitement. In fact Batty, with this engine, finds altitudes above 12,000 feet taxing, and her speed seems to max at about 42 miles an hour on the flat, down from 50 miles an hour. It is also pretty cold and every stitch of clothing has to be squeezed on. But a remarkable thing happens when one approaches La Paz. One starts descending very rapidly into the city and the heat climbs as you descend, so by the time I was at the centre I had stripped off more than half my layers.


Apart from seeing Leo, my back tyre that Dr Carlos had given me in Quito was showing canvas and needed to be replaced along with the rear chain. I had read on Horizons Unlimited that the Honda dealership, Nosiglia, in La Paz were very helpful to travellers and so it turned out to be. The only slight problem was that the only tyre that they had which fitted was built for cross-country. As it was the only one, I had to take it and it's wobblier ways have taken a bit of getting used to. 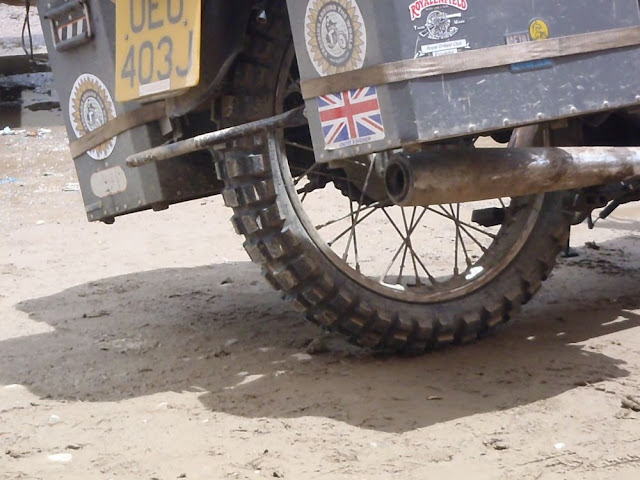 Leo had been working at the Loki hostel, which along with the Wild Rovers hostel chain are synonymous for their parties, and Leo had been having a great time of it. It's almost like anything goes and seemed to attract and trap many travellers in the time of their life for the few weeks or even months. In the process the hostels seem to extract a rather large slice of the said traveller's budget. Probably luckily for this traveller, both the hostels were booked up and I was in a far calmer establishment nearby.

After a few happy days in La Paz the south beckoned. Not only was there still many many miles to go, but I also receive confirmation of a return date of 1 May on board the Grande Cameroon departing Montevideo, Uruguay, disembarking in Le Havre about 3 weeks later.

Potosi took two days to get to and it was on final day with about 50 km to go that I ran out of fuel. I knew it was getting quite close, but was confident that my usual six or seven hundred kilometre range was going to comfortable get me there. Alas not. I had a few tricks up my sleeve, like recovering the fifth of a litre that is in the fuel filter, which took me another 10 km, but in the end Batty was dry. The problem had been, I think, is that at this altitude, around 12,000 feet, the engine is a lot less efficient and has used a great deal more fuel than normal. I tried knocking on a few doors in this incredibly remote and isolated area, but was met with rather blank reactions and lack of comprehension of my struggling Spanish. In fact I doubt they spoke Spanish at all as they looked and lived in a very indigenous way. In the end help came 30 minutes later in the shape of George and Juan, two Colombian bikers on a trip south. Of course they could not give me any petrol, but helped wave down a lorry and persuaded the kind gentleman to part with a couple of litres of his diesel. Back on the road we found a station about 20 km on. In Bolivia there is a rather unique fuel system. If you are Bolivian you hardly have to pay a penny for fuel, it is so subsidized that it is almost a non-expense, rather like Iran. However if you are a foreigner not only are you restricted to using a particular brand of fuel station, you are also charged nine times more for the pleasure….Equating it to European prices. This is also confounded by shortages that have trapped people for days. George, Juan and I booked into the same hostel, and enjoyed an evening in a central Potosi bar.

Potosi is said to be the highest city in the world at 4070 m  and was once the richest in South America because of the huge silver deposits in the surrounding mountains, as much as anywhere else in the world put together. Underwriting the Spanish economy for something like two centuries. There was the opportunity to go to see the mines, which are now just individuals and small groups extracting the last few remains of the treasure. However my sensitivities to claustrophobia made it something to miss unfortunately. All this wealth did not come without human cost as millions of imported slaves and indigenous people lost their lives over the centuries.

For the last two days it has been raining non-stop. I am in a town called Uyuni. A rather indifferent town to be in. However it is the place to come to to see the Salar de Uyuni. World's largest salt flat. In fact such is its scale and flatness, with only a metre difference in height over the 12,000 km² area, that satellites use it to calibrate their altitude rather than the ocean.

Because of the rain it was advised that one should not use the bike and take one of the many Jeep Tours. I booked a two day one only to be told when I got there that it had been overbooked and I could either do a one day or a three-day tour. Somewhat annoying, but the one-day trip was all I had time for. It was enough to see the scale of the flats, but only hinted at some of the wonders of the place.

It has been interesting meeting Bolivians. Whilst some are friendly in the way you find most people around the world, there have been a lot who just refuse to smile or engage at all, even when selling you something. It is difficult not to feel unwanted and confused by this charmless manner. Juan and George were particularly sensitive to this, coming from friendly Columbia, and they could not wait to leave. I think shyness is a lot to do with it...coupled with some very apparent poverty that cannot help the 'happy stakes'.

Tomorrow I head on to Argentina. I had hoped to go to San Pedro De Atacama in Chile from here, but the roads are apparently too perilous. I think it means missing out some of the Atacama Desert, which will be a sacrifice, but the alternative is several days diversion which will only mean sacrifices elsewhere. I am still in deliberation about this and my next blog will tell you how I concluded.
Posted by Unknown at 12:03 PM 3 comments: