15th/16th.
I had let the battery run down by having the lap top on charge for too long,  although great to be able to have caught up on matters communications,  a bit of a pain bump starting Batty. Luckily we were on a hill and it was not a problem, but that fear of it not starting is quite intense. A few miles down the road and short on fuel, I stopped to buy 8 liters of veg oil at the Penny store, a chain of supermarkets, now I am pretty blind to the odd looks I get when that is all that is in the basket. I had parked Batty at the entrance, which was also a garage forecourt. It takes a bit of a time to empty the bottles into the tank and I have learnt to take the fiddly tops off in advance which does speed things up a bit. Anyway it does attract attention and the pump attendant, yes they still have them here, came over to see what was what. He laughed and laughed, which got only louder when I could not start her. Eventually the kick start worked and all was well. To give him his due, he did offer to push the bike to bump start her. An old lesson re-learnt, don't stop the engine for at least 30 mins when the battery has been flat.
One thing I have noticed is the proliferation of solar panel farms here. There are a lot and it would be interesting what proportion of their energy comes that way. UK is way behind. This resonated with a discussion Humphrey and I had at the weekend, he has a long proven and successful track record of investing early on in all matters technology and the like, he is of the view that Sun energy will win out over all other energy forms  as the panels become more efficient, from the current 15% to 40% and even 60% over the next 5-10 years. Which combined with an annual 20% drop in production costs, makes it compelling. The holy grail is storage of energy, and that is what the boffins are intensely working to crack. There is promise that mass and efficient storage is not far away. He  imagined a world with hardly any power cables scaring our landscapes as most energy needs are created locally.
Talking of energy, the last fill up was on 1/3 to 2/3 veg oil, and all seems fine. Today I will switch to 1/4 diesel and see if I can standardise on that.
Having sat outside the DHL office from 2 till 4pm in Foggia, waiting for it to open after the very generous length of lunchs they have here ( in fact had a long lunch myself... and devoured a few more Neville Shute pages). When it didn't, I translated the rest of the message on the window, with my iPhone app, which said that they were closed all Thursday  afternoons. So plans had to be changed a bit. Bloody SIM card, why does the law of sod say that I will never need it?
Found a local shabby hotel room, as the nearest campsite is an hour away it has a very single bed and a view of a wall. My needs are modest, and it has turned into a clothes washing opportunity. Alas no Internet. But what do you expect for €45.
As I have driven further south in Italy, there are 2 economic indicators that have become apparent. The first is that I have seen no Ferraris south of Milan, but loads north  and the second, much more importantly, is that the further south Batty has been over taking cars almost regularly, twice yesterday, and 3 times today. Ok so they are quite slow cars, driven by somewhat elderly folk, but even so I can feel her gusto swell as we sweep past.   I will keep these indicators going as more of the world greets us.

SIM cards don't come easily, but at 12.30 it had turned up, having been at another depot. The DHL chap was v helpful and spoke pretty good English.
On Southward and have a less twisty route, putting up with the odd juggernaut. They seem less violent somehow down here, maybe I am just getting use to them. 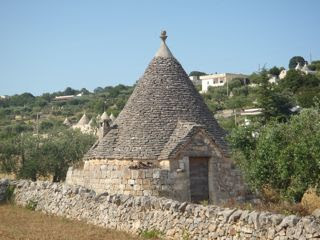 Much my joy I came across lots of  Trulli buildings, I wasn't sure where they were in Italy but knew it was southern. Having read about these funny shaped houses that are the things of fairytales, there are thousands south of Bari.
Now in the heel of Italy and the port of Brindisi only an hour away, I am hoping to get a ferry to Petra in Greece tomorrow evening.
Posted by Unknown at 2:42 PM 1 comment:

What has Hannibal and Batty got in common? They both crossed the Alps....

More of that later.

Bella, Humphrey, Ben, Sasha, Millie and Sam Nokes have been marvelous hosts to me for the last couple of days. As well as the amazing hospitality, the time spent going over the plans, washing Batty, learning so much about Switzerland and the Alps has been grt fun and a great launch pad for the trip on going. 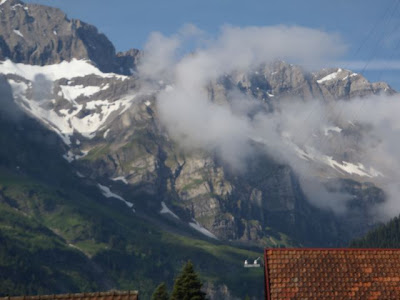 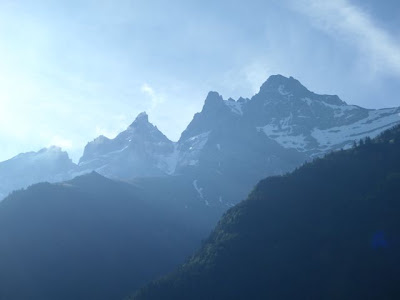 View from their back door...
Left Champery after a fine breakfast and given a big farewell from clan Nokes. The joy ride trips the evening before on Batty, with riding hats and ski helmets adorned had gone down a treat with Ben, Sasha, and Millie. Their enthusiasm for all things Batty  was most touching. 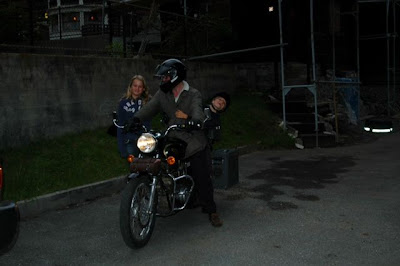 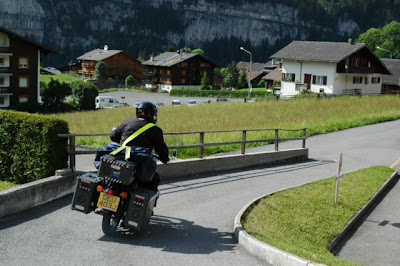 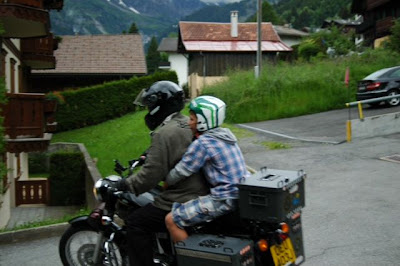 All the wiser, the suggested  drive up the Rhone Valley, surrounded by vineyards, was a special morning. Then to have the slow but spectacular chug up the 2000m to Simplonpass with the snow topped peaks just moments away, made even the expense of the rather ordinary sausage that I had for lunch at the top forgivable. 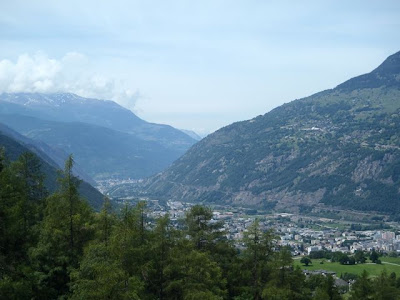 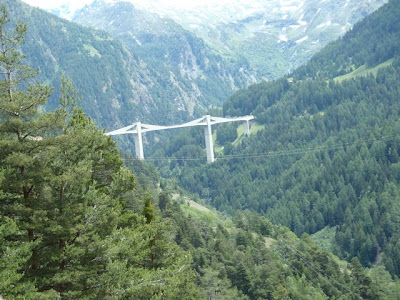 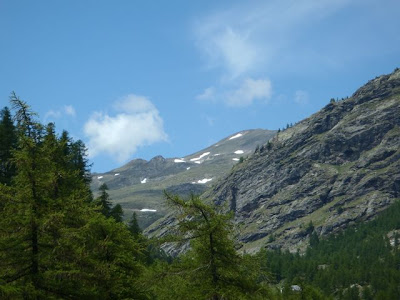 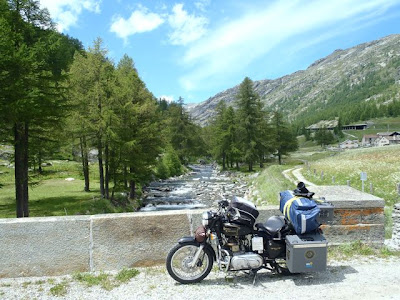 Batted down the other side into Italy   .  I have spent little time here before and am sure it is a place to share, rather than as a lone traveller. So I may crack on through, taking in the odd site.
I had read about it, but it took a bit of time to sink in, what the made up girls at the side of the road waving at the drivers were. Hitchhikers dressed like that? And so many all of a sudden. Then it clicked that these were the desperate victims of horrid events and circumstances in Africa manifesting themselves as prostitution on country roads in North Italy.
4000 miles rolled onto Batty's clock towards the end of the day.
Philippe was right about Italian campsites being crowded and expensive, €13.50 for the night and crammed next to the chatty, movie watching neighbours, makes for a different experience to the almost empty €8 French sites.
There was I thinking that the sun would only shine now that I was in Italy, all night it rained and I lie on my re inflated sleeping bag/ mattress combo in the tent at 8.30am, waiting for it to ease enough to break camp and head for Pisa. Luckily I am reacquainting myself with a Neville Shute novel 'Requiem to a Wren' which is so charmingly and well written the kindle pages afresh at a great rate. 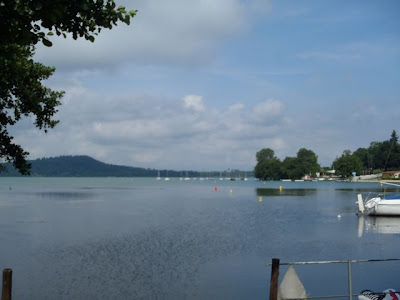 Rain subsided and had a magical drive through Piedmont country side. Zigzagging for endless miles. Garmin the Great took me on fabulous roads through the likes of Gavi, a favorite Italian wine of mine and then to the north of Genova. 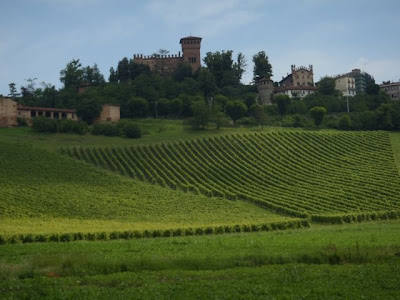 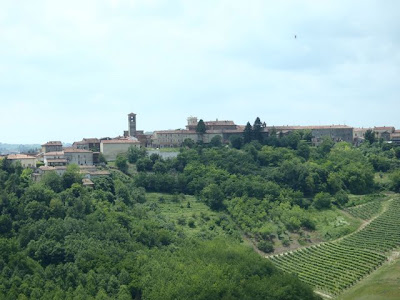 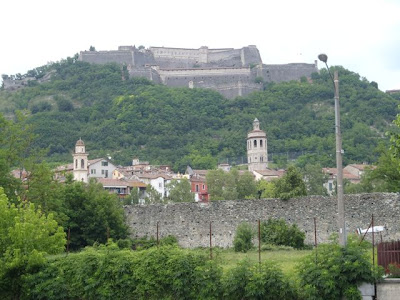 Gavi
Camped at a very over grown campsite that was more akin to a wildlife sanctuary. When I left at 7.30 in the morning the poor hassled proprietress, had she spoken English, would have been quite clear about her thoughts of having to get up to let me out. Had I spoken Italian, I would have given her a thought or 2 of my own about the smelly loos and the flea bites that were a gift from her non stop barking dog...

Having enjoyed fabulous roads yesterday that took me to the heart of the countryside, it did however take a lot of time and the miles were not very direct, so today the Garmin was reset to include 'highways' and as a result got to Pisa at noon to spend an hour or so wondering at a wonder. 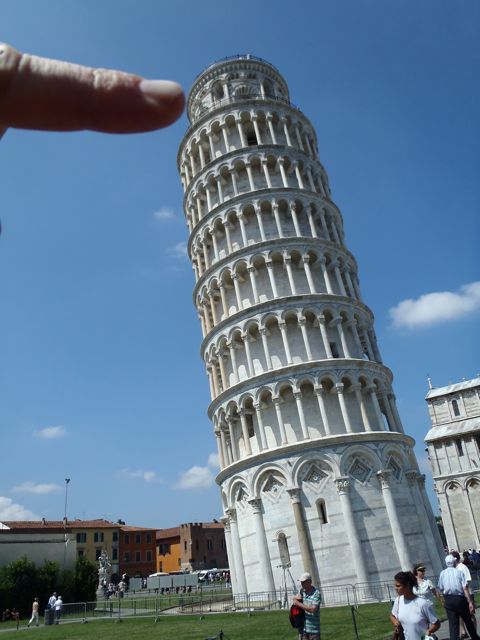 Then on through Tuscany, which it had to be, if the number of UK license plates were to go by. What a fabulous landscape, and deserves a prolonged trip, but not this time...there is a world to see first. 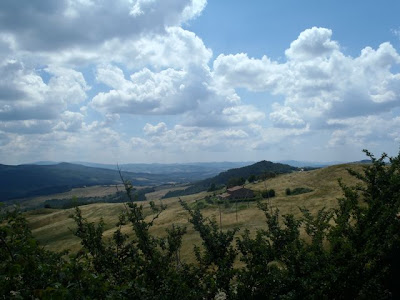 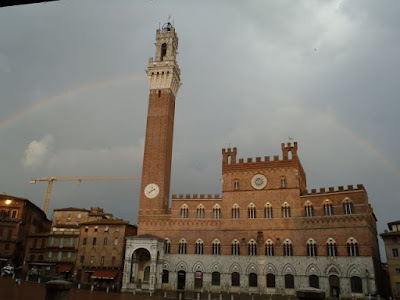 Spot the rainbow...after a vicious down pour
Siena is now, and the campsite is 5 star. Clean and tidy, grt showers and internet to boot. Dining at the Alla Speranza in the Campo, trying to imagine a barebacked horse race....I wanted to say that having seen their driving, I could understand the mad mindset, but so far the French have won that prize.


I have been putting my friends to an awful lot of trouble over a silly SIM card. I have a paranoia that if I loose  my phone, I will be incommunicado and lost. Firstly 02 have sent a duplicate for activation in the event, but of course to my London hse. Jacqui DHL'd it to Bella in Switzerland, DHL could not find the address (I could, with ease) but they could somehow today.....this had Bella running around all over Switzerland so that it could be forwarded to a depot in southern Italy for me to collect. After all that, if I don't loose the phone, I will be a real time wasting numpty.
Posted by Unknown at 8:52 PM 4 comments: