Left ferry at Santander at 1pm and took a great road to Vitoria, through hills and valleys. 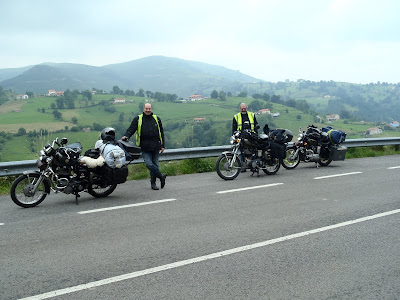 Started raining heavily and even had sleet/snow up on the high ground. Finished up without the energy or inclination to camp, so the 3 of us have bunked up in a functional hotel called the Duque De Wellington.....  Some beer and plate of food restored our rather soaked spirits. Our spoken Spanish is poor, but the Basque folk are very welcoming and their/our investment in their roads is first class.

We are getting Garmin weary having been sent around the houses, there are probably tricks to learn, but as yet they are causing more frustration than direction.

We covered some beautiful roads today and the joy of 2 wheels and scenery forgave any rain and shitnav angst.

Great but wet crossing of the Pyrenees. Batty loved the corners. 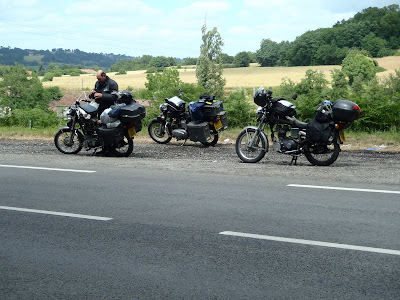 The bikes are running well and the few tweaks made are just fun and all part of the adventure.

More rain, but waterproof kit doing a great job,  my 25 year old walking boots are giving me the driest feet of the three of us.

Joined by Brendon today, a Brit who now lives in Massive Central. A fun man and rides a very swift 350 Bullet.

We camped by the Garron surrounded by Vineyards. Henry created a mind blowing curry...both in deliciousness, but even more so in spiciness. 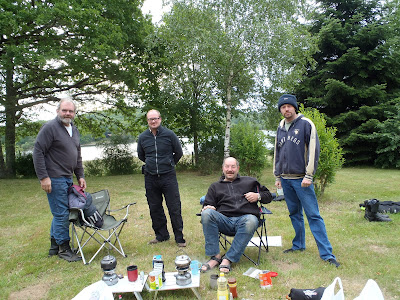 Yesterday Batty recorded 136mpg. By far the best and what I was hoping for. Will now start putting veg oil back in and see how we do.

Loads of wind. Found it a bit of a struggle going at 40-50 on the main roads with huge lorrys passing at 55 and cutting one up on occassion. Henry has a new Diesel engine just coming which he is about to test on bikes like Batty and it is 30% more powerful. This is quite a tease as I think if I could do 60mph comfortably, then it would make quite a big difference on Western roads. When I am by myself I will aim for slower roads and pull over when big trucks come up behind. There always remains an option to fit a bigger engine in due course...given a bit of airfreighting and lifting...we will see.

Roger has been beset with troubles on his bike (a 525 Lightning) the battery was knackered and then various brake switches had given up. Now that they are all fixed, things will get better.
He, like us all, fantasize about a new bike when one has trouble, only to forgive all when one's old friend returns to normal and the love affair carries on.

He and I found a lovely campsite near Bellac whilst the other 2 had a successful mission getting Roger a new Battery and supper.

One bit of sad news for the trip, via text from Uzbekistan, is that Mette, who was going to join in Turkey can no longer make it. A great shame and I was thinking of putting out an SOS lest anyone wanted to join me, but then took the view that it was an opportunity to push through Turkey and Iran a bit faster and try and get to Nepal for early August....it would be better weather wise alround.

Brendon was chef and delighted us all with a fine pasta ensemble. Another evening of beer, g&ts and wine.


Farewell fellow Bulleteers, as we part company, they to the Rally south of Paris and I for a long over due visit to Caroline and Brian, Emily and Harriet near Poitier. Henry, Roger and Brendon have been great companions and I enjoyed joining them on their run to the rally hugely. Not only was the company extremely generous and fun, just the immersion in many matters Royal Enfield has swelled my knowledge of the bikes no end. Batty and I look forward to joining them in a couple of years time.

Caroline  and Brian are nearing the completion of the restoration of a very fine town house in L'Isle Jourdain. The kitchen produces amazing things, and this is a very happy non camper today.
Posted by harryls at 6:46 AM 10 comments: 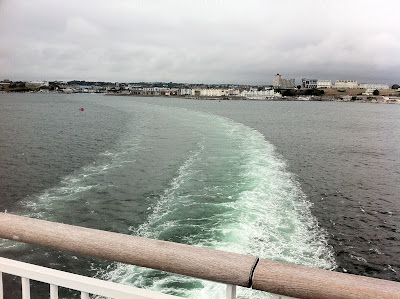 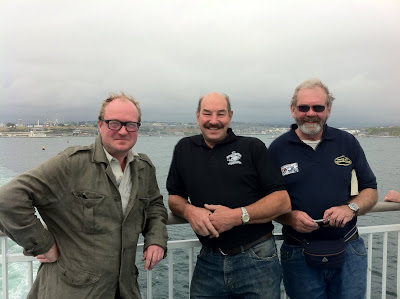