The ride to Rio de Janeiro was the best part of a 1000 miles, and all but the last 200 were pan flat. The road was lined by hundreds and hundreds of miles of sugarcane, in fields stretching beyond the horizon. I had witnessed what I thought to be large-scale sugarcane farming in Queensland, Australia, but by comparison it was like a small holding. Ethanol is on sale everywhere in the fuel stations as a petrol alternative and I believe up to 20% of normal petrol sold here has ethanol in it. So it represents an important part of the economy. 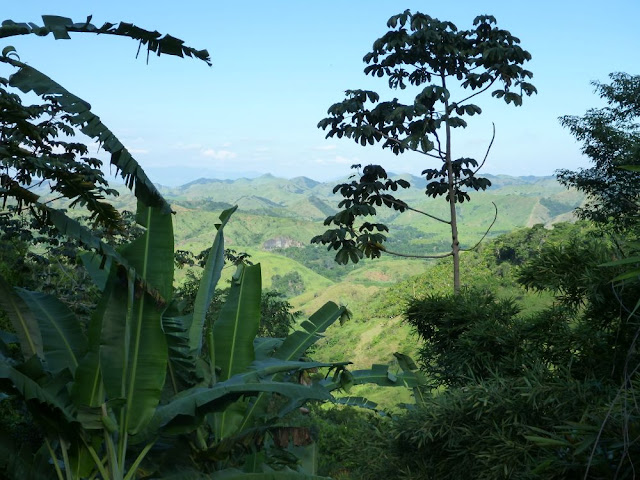 The rights and wrongs of this are complex. On one hand the use of largely carbon neutral fuel is a huge positive, which combined with a near 90% of all electrical generation being provided by hydro and great efforts to recycle makes it probably one of the world's more environmental practitioners in terms of energy pollution, it is counter balanced by ferocious deforestation. Although on the decline through tightening enforcement, it is still destroying hundreds of thousands of acres per year with the potentially frightening global climate changing consequences.

The anticipation of visiting Rio has been long acute. I guess it conjured up a heady blend of excitement and romance. True enough, riding into town one quickly notices the extraordinary natural setting of bays, sheer mountains and extraordinary beaches. It was the capital for a long time so there are many historical buildings going back to the foundations of the country, contrasted by sharp new office towers. 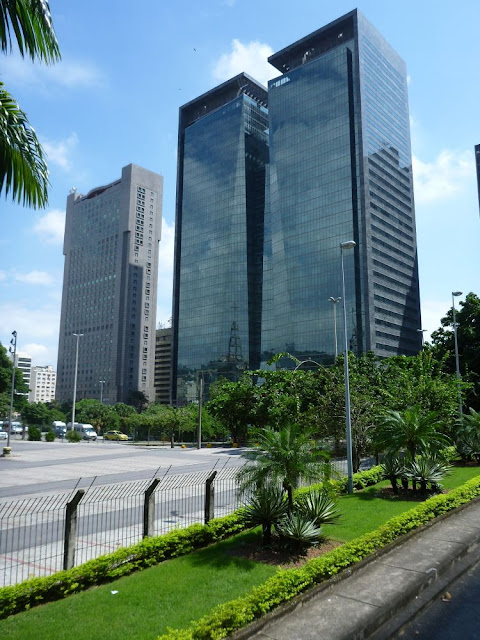 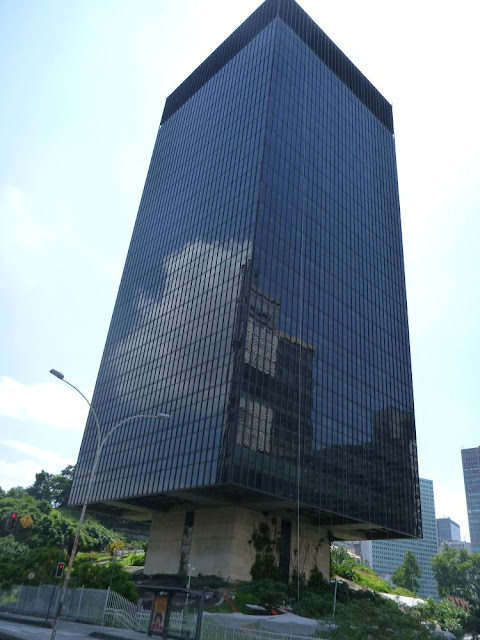 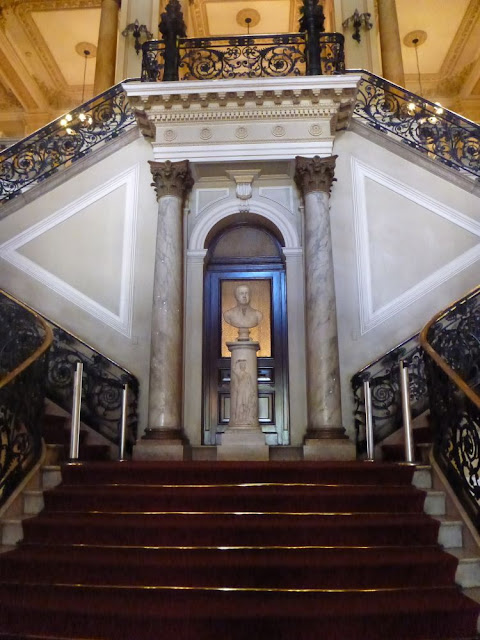 My purpose, beyond seeing the city, was to meet one of our artists, Michel Cox. He had joined us since I'd been away, so it was good to meet him and his team. We had a very enjoyable and fascinating lunch together. His success as an artist in Brazil and our hopes for expanding that around the world was part of our chat, the other being the possibilities of setting up a branch of the agency in São Paulo. This was an idea he had a great deal of useful thoughts on, so it will be interesting to see how it develops. I was due to go to São Paulo the following week, so I was all the more prepared. 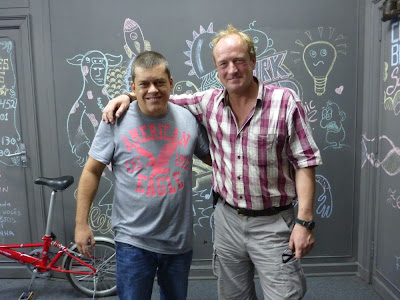 This was about the first city I had been to in South America that did not have various "free" walking tours available, so I got in touch with a fee-based one. I turned out to be the only client and had the delights of Luciana all to myself. Great in terms of undiluted and undisturbed immersion in the tour, but the bonus of meeting other travellers denied.

Being alone in a city, for me, is not the greatest fun, particularly of an evening. I was offered cocaine and hash as soon as I set foot outside the rather rundown hotel I was in, and although in a party central area, it did not entice me to find any. Language, shyness and age being the main reasons. 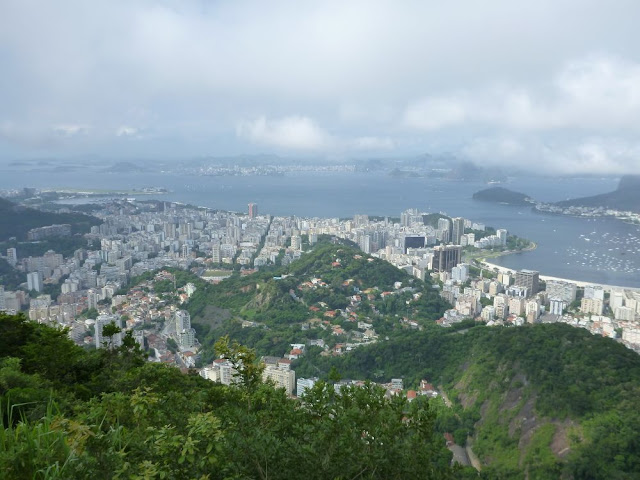 I made two attempts to go up to the mighty "Christ the Redeemer", that famous statue of Christ, arms held wide, looking down over the city. The first time the train was not running so I went back to the hotel and jumped on Batty, programming the GPS to get me there. It was a great journey climbing up through cooling and finer ancient streets of the city. As I approached the summit it became all too apparent that the threatening clouds had got to the top of the mountain before me, and the ticket clerk for the final ascent more than fairly refused to take my money. Hope on the next two mornings of finally getting there were dashed for the same reason. Though a disappointment, I still saw some amazing views from the trip up.

When I've remembered, I have tried to get a film to watch pertinent to a place I'm in. For Rio, it was a favourite Michael Caine film called "Blame it on Rio", Acapulco was "Buster" with Phil Collins, and now that I am in Uruguay "Battle of the River Plate" awaits viewing.

São Paulo was a two day ride and about half way is the seaside resort of Ubatuba, I was probably the only tourist in place, now that it was 3 months passed the season, even the camping sites were closed. The only reason really for mentioning the place was that the next day, on the ride out of town I came across a large crowd of people around a stationary lorry, practically blocking the road. As I edged past I saw a mangled up motorbike under one of the axles and I'm afraid a pair of feet poking out from a bloody tarpaulin. The police had arrived by the time I passed, but the dismay and horror of the crowd was very infectious. I imagine it was a local girl somehow caught up in a careless manoeuvre on either her part or the lorry drivers. This was the second death that I had witnessed on the road, the previous one being in Honduras.

São Paulo is home to between 18 and 40 million people, depending on who you talk to and what area they designate the city by. Either way it is one of the world's largest and tower blocks stretch beyond all horizons, making New York almost village like. I was only there for a couple of days of sightseeing and it took nearly another getting in and out. I had wanted to feel the place from a commercial point of view, which left no illusion as to it's wealth and sophistication. Alas there is a sizable number of homeless who scatter themselves underneath many of the cities' road bridges in houses of cardboard and salvaged materials, not making trouble, but in search of dreams by and large. A place of huge contrasts. The subway/underground system is very modern and efficient, and being added to all the time in preparation for the Olympics and the World Cup. 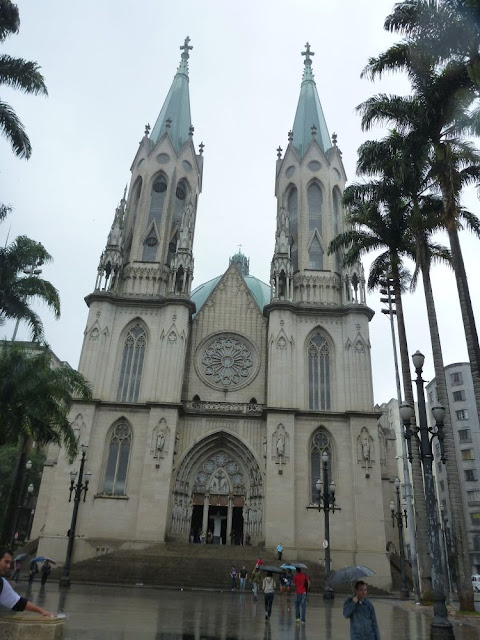 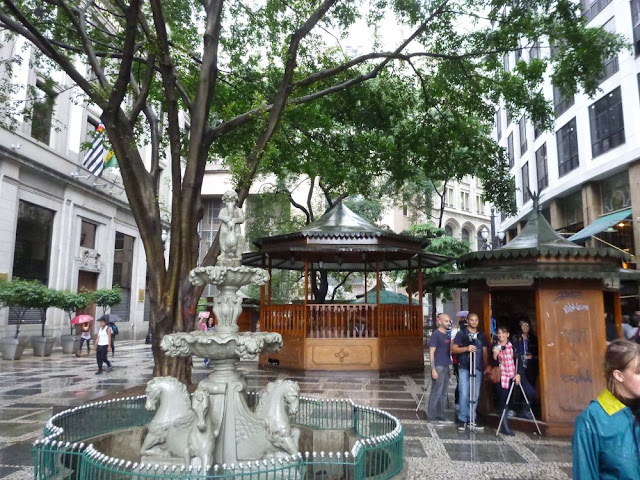 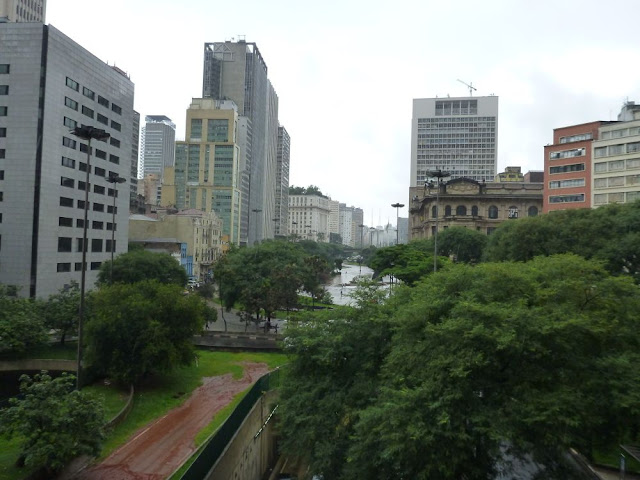 Rawdon, my brother-in-law, had been in contact with a couple of fanatical windsurfers in their successful combined international pressure to retain windsurfing as an Olympic sport. He had introduced them via Facebook and very generously Kasuo blindly invited me over for dinner with his family along with fellow windsurfers, Raul and Fernando.  Apparently Kasuo's wife had asked him if he knew me, and was I a Hell's Angel?  He did not have an answer, but maybe it was relief mixed in with the big welcome that I saw in their faces when I walked out of the lift. They live in a smart part of town, and 22 storeys up in a very new apartment block….the warm welcome and fabulous views overcame my wobbly height-fearing legs and we had a great evening, ending with Raul insisting on driving me the 30 minutes back to my dodgy hotel, before he headed home, an hour and half away.

The next week was largely taken up with work things, and housed myself in the pretty seaside village of Praia do Rosa. Again I was alone in the hotel for much of the time, and had excellent wifi connections for our 5 hour video conference call. We worked through all that had happened over the last quarter, and the plans for the next. As ever the energy and enthusiasm of the business goes on unabated, and my return all the more excites…for me that is.
You may have noticed no comment had been made about Batty so far on this post. All the way across the country and down into Rio de Janeiro all had been going fine and apart from the odd adjustment to a cable or some such, it had been a very smooth run. I had noticed it and had rather optimistically thought that she knew she was on her way home, and did not want to cause any trouble. By and large this remains the case, however since I had put on a cheap rear tyre early on in Brazil, punctures had started being a regular occurrence. These gave cause for greater interaction with my host population than practically anything else. Two occurred on the trip between Rio and São Paulo and both were readily and easily solved either by being bang next to a Gomaria, the tyre fixers, or by my old friends the road rescue crews that patrol the main roads (tolled). 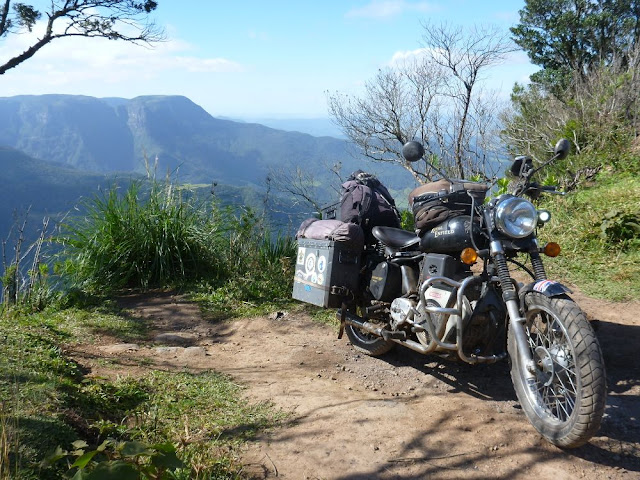 2 more punctures complicated the next couple of days. The last one, on the final leg to Uruguay was 70 miles from a town, in a National Park region. The rear tyre had disintegrated and there was no way to fix it…off came the wheel (now only taking a minute or 2) and I locked up the bike as best I could and raised my thumb for a ride.

A local farmer stopped and called the police for help. He advised me to stay with the bike and the police would be along in and hour…'mas o minus'. Having taken the opportunity to fix a few niggles on the bike, oiled the chain, topped up the gearbox oil etc, the  2 and a half hours until they came seemed to go quite quickly. After the obligatory documents check, they set about helping me. They called up a local park warden to come along with his trailer so that they could safely store the bike, whilst they loaded me and the wheel in the back of the car and took me the 70 miles to town. It was a journey that was to take me 2 hours later that evening, but they did it in 50 minutes. It was a unique experience to be above the law, with the law, as they drove at 90-100 miles an hour along 40-60 mile an hour restricted roads. The local Honda dealer fitted a new Pirelli tyre, pointing out that the old one was a poorly done retread….I had thought £30 was a bargain at the time.
The 2 police officers had by this time become very friendly and conversing with a bit of school room English and Spanish, we had a great old time of it. They flagged down a lorry and instructed the somewhat bemused driver, Marcello, to take this luckless English man back to the park rangers, which he kindly did. This whole experience was very much in tune with how the people of Brazil have treated me…with generosity and kindness, and my appreciation of the country is very high.

Despite Brazil being the last country to ban slavery in the 1890s, there is hardly any racism and people from the world over happily mingle and prosper (by and large) harmoniously together as any society I have witnessed. That is not to say they don't have issues that flair up from time to time, and corruption within government selfishly rotting away the opportunities of many.  Nevertheless Brazil's rapidly rising wealth and influence in the world should benefit the whole region, whilst bringing flare and colour to the world's high table.

Reimon and I had met in Buenos Aires, by introduction of Fabiana, and he had kindly said we should meet at the Brazil/Uruguay border town of Chuy. Sure enough there he was on his new Royal Enfield at the appointed hour and place. South we drove for a couple of hours or so to his summer house on the coast at Jose Ignacio. I write from there, enjoying homely comfort and good company before heading onto Montevideo.
The good ship Grande Cameroon is the vessel assigned to ferry Batty and self to Europe. The times and options for disembarkation ports are changing by the day, with the options shrinking to Antwerp or Hamburg, at the last count. I guess it will continue to evolve over the voyage, so have adopted a relaxed and philosophical attitude…whatever the route, it is all part of the trip and will be fun and fascinating.
Posted by Unknown at 11:45 PM 5 comments: