15th July, Crossing from Turkey to Iran at Sero. On to Orumiyeh

Top tip: if you arrive in a town in Iran, and need to ask for directions, find a stall that is selling something you fancy the look of. I was trying to find a money changer that I knew was nearby and asked a guy who happened to be selling all these fantastic cup cakes (Iranian style), he tried to help, but in doing so, when complimented on the fine display, gave me one. Delicious. Alas he could not help, but would not let me leave without a bag of these delights. I had read you had to offer something 3 times here to have it accepted, but alas my numerous offers to pay for them did not succeed.
A few minutes later I stupidly (?) walked  into an iron bar that was sticking out of an awning at head height. It drew blood, although looked worse than it was. Somewhat thrown, I started walking back to the hotel, when a beep from a car heralded a lady holding out a handful of tissues for me. I guess she must have seen it, and so kind.

My experience of Iran within hours of arriving.

I had left the "plush" (don't get me started on the broken aircon, the broken shower etc) Turkish hotel at 6 in the morning to make for the Sero crossing by midday. It was a 150 miles away and all the mixed reports made me want to give it as much time as possible.

The last 4 days had been rather dull from a journal point of view, but I will report that it is amazing how much one can catch up on in 3 or 4 intense and long days. The business is going great, looked after by my fabulous colleagues, and a few of the on going development things are in v good hands now. Our online strategy meeting lasted 5 hours and over 20 new actions, small and large, emerged for the team to get stuck into over the next quarter.

I feel a bit bad about Maarten and Line from Holland, who I had met in Van and who were cycling to China from Holland, because I kept blowing them out for dinner. Sadly the UK and US hours just kept conflicting. Here is a link to their trip.

It was great to be back on the road again. Good though the 'work' days had been, the beginnings of frustration at  Batty's static-ness was beginning to tell. The road from Van was through and over a range of mountains that had the height record broken again at 2700m.

The last 20 miles was on dusty 'about to be tarmaced' road and we emerged at the border post as if we had been through the paint spray shop.

It took an hour and a half going through the crossing. I was so wary of the warning I had had of insurance touts that I ignored any approaches, and suddenly found myself been greeted 'Welcome to Iran' and I was in. Rather painless, but fantastic, fulfilling a long held wish to be here. The trouble was that I had missed the insurance booth to get the mandatory 3rd party insurance for the bike. I thought I would get it in the town I stay in, and crossed my fingers that we would stay safe getting there.
The Garmin maps that I had been given did not have a detailed map of  Orumiyeh on, so finding a hotel was tricky, but ended up in the Reza Hotel. 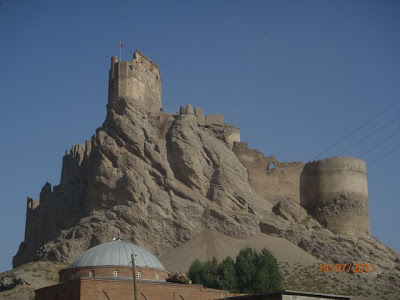 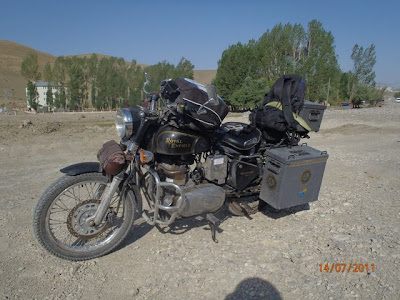 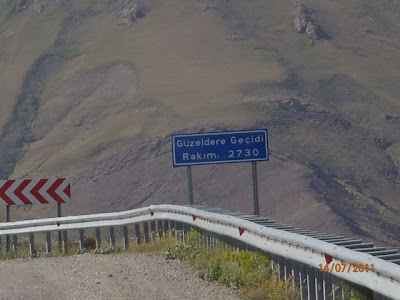 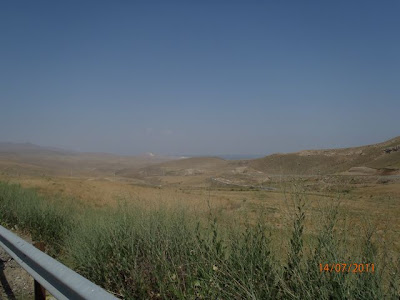 On the road to Sero, Turkish/Iranian crossing
It will have to be a 2 night stay as tomorrow is Friday (Sabbath) and the insurance offices are closed.
Posted by harryls at 6:06 PM