Spending a week here. Collecting a few bits and pieces sent by my amazing Vicarage Crescent friends and arranging freight and flights etc.
Ramadan has started, and it means that there are a lot of people away and businesses close early...also folk can be a wee bit tetchy by the end of the day, having not eaten or drunk anything since 4 in the morning.
Have had to change my plans a bit, in that sending Batty to Katmandu is prohibitively expensive (£3000+, apparently only one airline goes there from Dubai with a large enough cargo door...), so Delhi it is for about £800.
Rainbow Cargo were suggested to me on Friday (sabbath)  by a chap on customs at Dubai Cargo Village, as a company who send bikes and 'dangerous goods'. I called them the next day and arranged to go there on Monday.
It was a funny mixture of abandonment and freedom seeing Batty being packed up, having whittled my needs down to a backpack. Having had her as my reliable constant for a couple of months, I was now so light of 'stuff' and responsibilities, it was almost disconcerting. 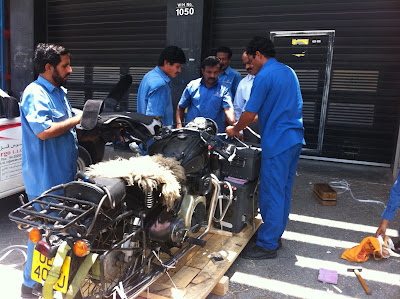 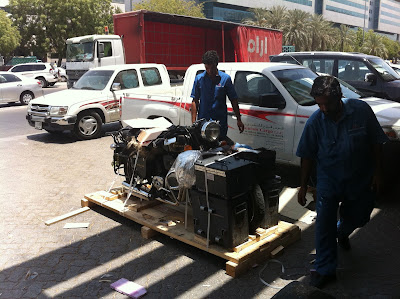 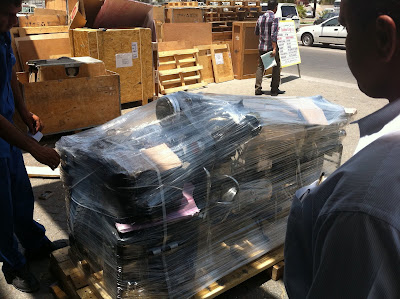 As chance would have it, I met Giancarlo at the shippers. He was sorting out shipping his Yamaha to India as well, and had been recommended to Rainbow for the best value.

We met for supper a couple of days later and I learnt that he  had come through Iran and been on the ferry a couple of days before me. He had had a month there. He is Italian who was brought up in Lausanne, Switzerland, just a few miles from Bella and Humphrey and this is his blog for all you French reading  travellers out there: http://eurasiemototrip.uniterre.com

Another marathon shipping trial. In the end and had I, or anyone else for that matter, known what they were doing, getting the export certificate takes about an hour. Alas I was taken and sent to 8 different offices all over the city and over 6 hours. There were loads of condradicting opinions and instructions. These are the correct ones for anyone reading and trying to ship their vehicle and needing an export certificate:


You will need your registration doc, carnet and passport.

Mr Othman, Daira Traffic (RTA) is the man to see, and his office is off Al Aids Street and 100m down 8 Street. Opposite Terminal 2.
First get a proof of ownership form from him, which you need to fill out with registration number etc. Then this needs to be stamped by the CID  (police dept, 600ish metres down the road and around the corner away,  he will explain where, even ask him to draw a map as I have found directions here are very ambiguous). Go to the 'internationally wanted' (don't ask me why) office in the CID building for stamp. Then return to Mr Othman and he will issue the Export license doc.

Rainbow kindly put their driver at my disposal and had he understood what we needed to do and where, it would have been a far greater help.
Posted by Unknown at 8:32 AM