Back in Delhi and on to Nepal, 2 tank system and increasing veg oil use.

6th Nov
Went to pick up bike from the train parcel office. I had sent it with an agent, rather than direct with the railway service. I had not intended that, but was hijacked at the Secunderabad, Hyderabad parcel office. Anyway it seemed ok so I went with it. It is a good way to travel with your bike in India. You have to be prepared to have a knock or two on the bike. Batty had a few scratches on the panniers and the headlight has a crack. It saved so much time and was such a relaxed way of traveling that it was worth it.
It was good to be back fleetingly in Delhi, and I recognise my way around a bit now. I was to have another go at getting the larger fuel tank with a small compartment for diesel to start/stop and the larger side for veg oil once the engine is hot. Ashish of royalmotorcycle.com had the tank and he and his colleague Bundy, have been very helpful. I needed a 'T' connector for the 2 tanks to join into the 1 fuel pump. This they found along with the extra length of tube that I have looped around into an outer engine casing that will get quite hot, but hopefully not too hot to melt the rubber. I have this cunning plan, having read about it on various sites, to try and preheat the veg oil before it goes into the pump and then ignition system, in doing so making for a better/cleaner ignition. We will see.

This is the loop of tube running into an outer engine casing that should heat the oil to help combustion.

It was a good opportunity to get a new back tyre and a new leather cover for my seat which will hopefully last a bit better. (I have been asked about the sheepskin cover a lot, and i appreciate the concern for my back side. Alas we parted company in Goa, as the wiff had got to much. I don't think the rains helped all that much.) This has meant staying here an extra day as the Ede holiday. I want to leave on Tuesday for Nepal after getting the tyre and seat sorted.
I met Prem Kumar at Ashish's office. I knew Prem although without realising it, as I have been a reader of his website www.60kph.com which seemed to come up on web searches about routes in India. In particular I had read it when trying to find the highest pass in the world, which I learnt is a place that foreigners cannot go as it is on the Chinese border, but it was Prim who discovered it, rode it and wrote it up for the site. Charming chap and very enthusiastic about all matters about long rides and bike adventure.
8th Nov
Make a plan in India and then double or triple the time. What was supposed to be a couple of hours changing the tyre, seat, battery, and a few other odd and sods, ran deep into the afternoon. I had given up with trying to put the seat back on, so fiddly. My guardian angel came along in the form of Vivienne, who's colleague does this all the time and she suggested that he should help. So kind, particularly when it held her back from getting all the supplies she needed from Ashish, for her custom Enfield business.
Talking of tyres, my last continental rear tyre has done the best part of 10,000 miles which I thought was pretty good. This new one is made by MRF and is the one new Enfields are fitted with here. The chap who put it on said I would get 30,000 Kms from it, 2 x the last one. If that is so it will see me home almost...
I needed to leave and at least get out of Delhi that night. When I got on the road it was 4.30pm and the simple route out of the city turned into a complete nonsense as major roads were blocked with Ede festival processions.
It took 3 hrs and I write from a squalid hotel on the outskirts. The upside is that the mutton curry they made me was v delicious.
Hopefully I will make the border at Mahendranagar today.
Well it is 9.30 and I have moved 200 yards from the hotel start at 7.45. Batty would not start. Various kind folk tried to help me bump start her but to no avail. A kind man by name of Rajnish Chopna, has taken charge and got an Enfield mechanic to come and have a look. He, in turn, thinks it is a diesel engine issue, so a mechanic skilled in such matters has been called, we will see.
I have had starting problems of late, which I put down to the new battery I put in when the original gave up the ghost a couple of weeks back in Tamil Nadu. It was a 9 amp battery instead of 14. So when I replaced that yesterday I thought it would fix it. Truth is that the new battery will not have charged properly, which combined with a clutch that has been rather shagged by the exit from Delhi yesterday has meant that the kick start is slipping a bit and not getting the turn I need to start it properly.
A chap, who has an original diesel Enfield, turns up and puts the kick start at a higher angle, which gives a bigger swing. This gets her going, the battery starts charging and off I go. Leaving probably about 50 cheering on lookers and a few saviors, who put everything aside to help, so kind. After a long run she now easily starts off the battery. Oh sweet joy. Batty is a wonderful being, but her complexities and moods just occasionally confound me.
Leaving India was a breeze at the boarder, and a joy. The immigration chaps all smiles and jokes and the customs chief the same. All about how his colleague, who was sorting my paperwork,  was a tremendous fxxker, with 2 wives in India and a girlfriend in Nepal. Very amusing made all the more so because the man in question seemed so placid, serious and just unlikely. He was wearing a cardi for goodness sake. Or was there a twinkle in his eye that hinted at a Lothario, dark horse and all that.


Nearly 6000 miles in India over 3 months and I wish I could say that I could give an quick summary of it. No, it is far too much of a heady cocktail, so many ingredients that have you loving it and then loathing it in the same minute. I suppose I am bit tired of non stop juxtapositions that just confuse this simple mind. How can extraordinary natural beauty, some of the kindest of people, with such a sophisticated 6000 year old religious and social culture, intensely strong family structures, say nothing of the delicious food, be so off balanced by such endemic corruption, some shocking child and women abuse, horrific poverty, little sense of civic pride and that occasional whiff of poo. India is galloping into a poll position on the world stage, there are huge fortunes being made and the quest for material wealth is fueling an environmental carelessness that I am afraid will compromise us all if not arrested soon. Not that we can talk of course.

Would I say visit India, a thousand times yes.
Nepal

The plan to make for Tilawakot was changed when on a quick stop at a mechanic to get the chain guard fixed, it has started making an annoying rattle, I was greeted by an other customer who asked me where I was going. It turned out that he was a guide in the Bardia National Park and his very nice manner easily persuaded me to spend a couple of nights at his 'resort' on the edge of the park.
The rooms/bungalows (£4pn) at the Tharu resort are delightfully simple, clean and comfortable. Good food and a great day trekking in the Park. 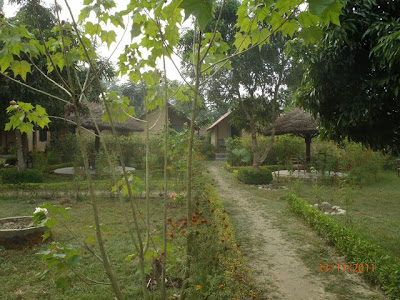 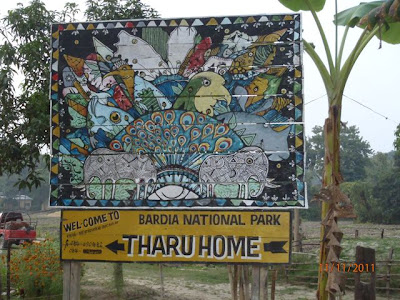 Alas we did not see a tiger, but Sitaran and his trainee Daman did get us incredibly close to a pair or rhinos by getting me to climb up a tree. It was very exciting. 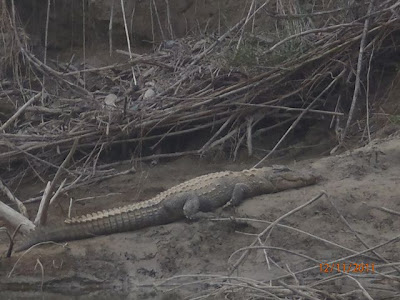