Will it really come down to Bribary?

I always seem to be writing from Kathmandu, it must be at a junction of happenings during the last few weeks. This time I am staying in the Kathmandu Guest House, which is one of the original hotels in the city, designed for foreigners. I am mainly here because it is very close to the shippers who are boxing up Batty tomorrow to ship onto Chang Mai in Thailand. Would I stay again…probably not. Although a little more comfy than the general abode I choose, it is large and unfriendly, which for triple the amount knocks it right down the scale of value as far I am concerned.

It is funny how the memory of pain goes. Although no physical pain resulted in the 2 weeks getting a new engine for Batty, but mental pain of frustration, uncertainties and feelings of helpless in a game being played that I had no clue of the rules.

The engine arrived in Kathmandu 4 days after leaving Henry's work shop near Bristol…all very efficient. Raju had taken the old engine out and was ready to go, so all we needed was UPS to deliver the last leg to Pokhara. Various conversations between Raju and the UPS guy indicated a problem with the importation of a whole  new engine and his business not being registered. This prompted a decision to fly to Kathmandu, show my carnet (a passport for vehicles) and pay some duty. That was done and I left being told it would be there the next day…all good, a bit of hassle, but only 3 days lost.

Next day no engine. The chief customs man had said that he wanted proof that the bike was in the country and in Raju's workshop. This involved going to the police station and getting a chief to sign a document to that effect and sending via UPS to the office in KTM. This took 3 days for some inexplicable reason to get to the customs chief…then he wanted the carnet again. You can imagine that by this stage I was seething until suddenly I realised he must be after a bung/bribe/sweetener. For some funny reason I was more relaxed having worked that out. Although the whole idea is abhorrent to me, if it was the only way, it was going to have to be. And in person I was going to deliver those poison notes, lest other sticky fingers wanted part of the action, so another trip to KTM. One more early morning but delayed flight, had me in a UPS van heading to the customs building near the airport by lunchtime. I had stopped off at an ATM and got out about £100 thinking that it would take somewhere between £50-£100 to wrest the engine out of their clasp.

Armed with the carnet and a few practiced phrases like '....is there a special service I can buy to help speed up the process....' or '...I am sorry this engine is causing you all this extra work, could I make a contribution to your office party as a thank you?..." for the Customs chief, we went to see him. He took the carnet and then his huge book of rules and regs and started quoting things, written in Nepali, like a new replacement engine imported for a vehicle on a carnet had to have the old engine shipped out of the country. That was plain ridiculous, who would require such a stupid thing when the engine was completely useless. What to do I asked, waiting for the cue…he said just write and sign on the carnet that you will send the old engine out of Nepal…so I did, 'OK, now you can take your engine' he said. In disbelief I slowly took my hand out of the pocket, leaving the bung where it was and shook his hand. It all took no more than 20 minutes.

I still don't really know how it took so much to do so little, but I am sure that had I not gone back again and seen him myself, it could have dragged on yet further.

It was too late to get back by flight so I booked into a cheap hostel and got a ticket on the 7am bus back to Pokhara the next morning. The bus was actually much better than I had feared. 7 hours of catching up on the latest Dessert Island Disk, and From our own Correspondent etc podcasts and chatting to Laila.

Laila half lives in California and half lives in Pokhara. She has a bar/restaurant in both places, both called 'Laila'. I had seen it along the street, but not visited it. She was a great bus neighbour and we covered all sorts of conversational ground. The hours and miles fell away and ended with a promise to come and sample her hospitality the next day.

The engine beat me back to Raju and he was all set to work on it the next day. Henry had sent me detailed notes on how to best fit it in, which I had to read to Raju very slowly…I was suspicious before but it confirmed that Raju was illiterate, not that it took away from his mechanical skills.


3 days later he had it all fixed up, a diesel mechanic pal had helped and they did a great job tuning it and seeing me back on the road. I think Raju probably managed to extract from me about double or maybe quadruple what a local would have been charged, and it irked me a little, but in the end he had run around like crazy, had useful connections in the police and worked long hours to see me right...I was happy that he had the option of not needing to work again for a month or so.

The new engine is more powerful and feels great. I am still running her in so it will be 1000 miles before normal use resumes, but it feels great to be back on board. 3 weeks had passed since she went into Raju's place with a suspect noise.

So what does one do hanging around in a fine town like Pokhara with lots of shops, bars, and new friends abundant for 2 weeks? Well in my case I was blessed by a few things, not least the friendship of Jess and Al. Regular lunches and suppers with introductions to some of their friends. An invitation to a Fancy Dress party at Maya Devi that was as high octane a party I have been to in a long time, ending for me at about 1am and a lovely stumbling moonlit, hour long walk home. 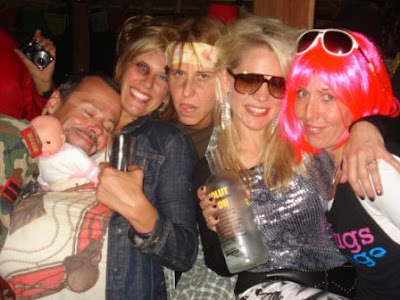 Otherwise I took walks to nearby sites, evenings at the Bullet Basecamp meeting fellow travellers, supping with my landlord Ganesh and his charming philandering pal, of the "…it's alright if you always let your wife know, then she gets use to it and knows that it is not serious…" school of reason. A couple of early drinks with Laila in her bar and promise to come by her Californian place when I am passing next year. I also managed to trouble the office a fair amount with various web developments and financal stuff…just when they were all revving up for the Christmas party that I was very sorry to miss.