Laos. A shortened trip, but a fun one.

On the Mekong river is the my writing place, and more precisely on a passenger boat taking me the 170 miles upstream from Luang Prabang to Houei Xai over 2 days, overnighting in Pak Beng, making my way back alone to Chiang Mai. These great river boats carry a mixture of about 60 locals and Farangs (as we foreigners are called) the length of the river. In my case to the Thai border. The Mekong is a huge trade, hydro-electrical power source and irrigation artery for Tibet, China, Burma, Laos, Thailand and Vietnam.
The stream is strong and the currents eddy all over the place, which the captains have the boats dancing across with deft skill and confidence, riding rapids like canoeist whilst they dodge the sandbanks and rocks that populate the river. 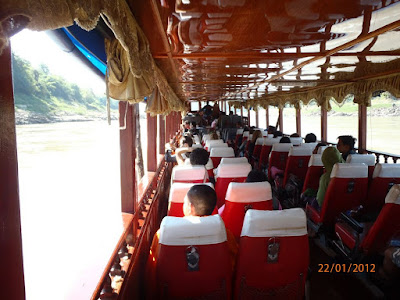 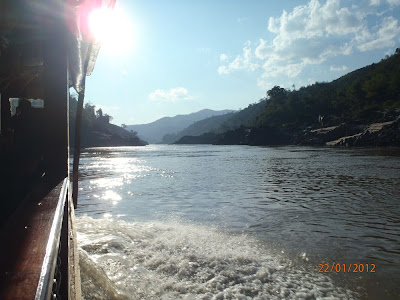 Susana has gone back to Goa a few days earlier than originally planned. We had a great time and she is a fun companion, however what was suppose to be a 2 week bike tour wasn't, and we found that milling around with multitudes of tourists doing the tourist 'thing' without the independence of our own wheels  somewhat depressing, so we just decided that it is best to cut our losses and get back the the places where we needed to be. In her case the girl looking after her boutique had become ill, meaning it was closed for  important parts of the day, which in high season was an understandable worry. In my case having Batty out of action and the trip in a state of limbo was vexing, so an early return to Chiang Mai was a relief.

We had arrived in Vientiene, the capital, in the morning and it felt to us like it was not really the place to spend much time. Although it had it's charms, they did not engage,  so we bought a couple of overnight coach tickets to Luang Probang.
It gave us the afternoon to kill, so we found a sushi bar that appealed after the delicious but consistent South East Asian fayre. By this stage I was getting in tune with Susana's joie de vivre, and numerous bottles of LaoBeer found their way onto the table. A few hours later we glided  back onto the street and found a massage parlour to ease the afternoon away.

The coach trip was fine for lucky me as the sleeping pills did their trick and a near 7 hour sleep took care of much of the 12 hr journey, alas some did not do so well and there were vows never to do it again from certain quarters.

It was such a good idea as Luang Probang turned out to be one of the most charming towns I had encountered. Although geared for visitors, there was such a lovely relaxed atmosphere set off by heavenly architecture, unchanged and beautifully maintained from the time of French colonialism that fused mostly local tradition with just a hint of European. The streets were clean, no neon lights, little touting and lots of local smiles. If one was to look for a snap shot of the best of market driven communism, it would be hard to better. 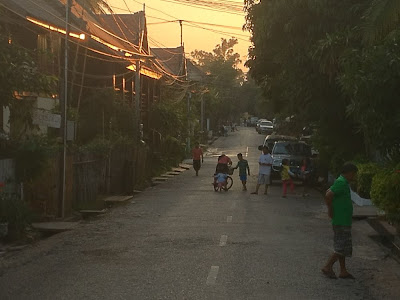 That said we were surprised by the high prices that were demanded there. Hiring a push bike was $5 a day, 5 x the Thai rate, a scooter was $20. This scotched plans to take off into the hills for 4 days, not because we could not afford it, we hated the idea that we were supporting a racket.
We spent 4 days going off on walks, doing an elephant ride (not really what I came on this trip for) and each day enjoying great long lunches. 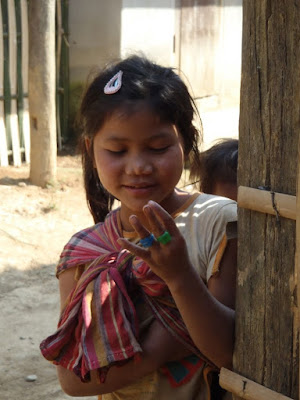 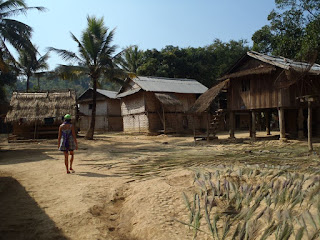 The best dinners was in the food market, where we grazed on devine spring rolls, local sausages and the pinnacle of culinary delight; barbecued Mekong river perch. Twice we went back for a bamboo plate of this, the juiciest, most succulent heaven that mother nature has presented me in a long time.

Our last day was to be a ferry ride across the river to explore a temple that we spotted in the distance. As chance would have it we were corralled  on to a boat with a couple from Argentina, Josephina and Pablo, who had hired the boat for a couple of hours to potter up the river. Initially they were going to drop us off on the other side, but we soon were chatting away like old friends and they kindly let us join them for their trip. This evolved into a liquid lunch. I hope to catch up with them next year. Pablo's family are ranchers and a chance to see them again and perhaps witness their way of life would be fabulous.
That evening we celebrated our short holiday with a full body massage, which only scored 4 or 5 out of 10. Just weak and lacked any restorative energy. Then to a good French restaurant that had snails and carpaccio which with a couple of bottles of burgundy prepared us for clubbing LP style. It took a couple of goes but we did find the Doa Fa nightclub. The best bit was watching the sazzy lady DJ, who had everyone going crazy, she was like a high priestess with a sniffle.