I left the Perhentian Islands having had a few more dives and a increasingly social time, as more people came onto the islands. An important link in all the social life was a delightful man called Egbert, who lives in Spain but originates from Germany. He is one of these magnets and gathered a group of unknowns around a table for dinner every night. A great gift and a catalyst for much fun. Certainly the morning of my departure, which required a 7 o'clock rise to get the boat at 8, was an ordeal not tackled for many a long time, having gone to bed at 3 o'clock with more whiskey on board than memory recalls.

The next stop was the Cameron Highlands, about 200 miles away. I had been tipped by my cousin  Giles that it wasn't really worth the excitement that its publicity suggested. Although stunning countryside in some ways, it is being decimated by deforestation and tens of thousands of acres of plastic tarpaulin covering the vegetables and fruits that are grown there. Of course people need to be employed and commerce undertaken, it's just a shame that an undoubtedly beautiful area is being chopped and covered by man's insatiable appetite. 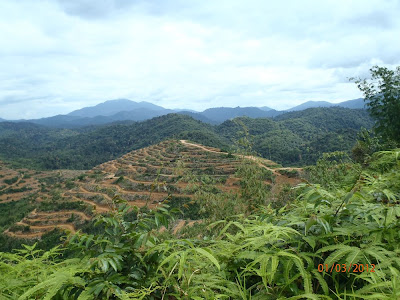 I went for a walk with my hostel friends and dined with them, very good company and my regard for our French neighbours only rises to new heights as my journey continues. This was re-enforced all the more when I was crossing into Singapore without any local currency, a French chap lent me a few dollars,  or I should say gave me a few dollars to cover the bus ride into the city.
A couple of nights in Malacca was fascinating in terms of learning how the Malaysian peninsula was occupied by the European powers over many centuries. This may sound stupid, and something really rather obvious, but I'd never really thought that these countries that the Europeans colonized minded too much! And in fact welcomed the trading, political and infrastructures that were bought in. But of course that's not true and the long fight for independence started in these lands as soon as we arrived. A terrible bit of history that has been documented in the West as great achievements. There will be a limit to how loud we can squeal when the tide turns, as it seems to be doing.

I had been grappling to try and find a reasonable cargo price to ship Batty to New Zealand and in the end Singapore proved to be the place, it was still more than I had hoped, but it is a 10 hour flight  and I guess not a lot of cargo goes out by comparison to other places. What I didn't realise was that just to cross the Singapore border with a vehicle involved quite a procedure. Apparently many people turn around  when they get their because of this I was told by the border chap with an encouraging 'push off' sort of look, but my die was cast and the hoops I had to jump through included having to leave the bike in Malaysia, take a bus into Singapore, get a sort of road tax document, insurance and was given a very strict time table to export the bike - 48 hours to get it too the airport. It was a day of hanging around in the automobile Association building and long bouts of paperwork at the Border.

I had been lucky enough to meet Glenn, a fellow rider, at Rider's Corner in Chiang Mia. He lives in Singapore and is a shipping agent. Although he has not shipped bikes (normally it is Formula One teams, rock bands and newsprint) before he and his team made a first-class job of seeing Batty on her way. Mega-Air is his firm and his email is glennphuah@mega-air.com.sg for those looking for a first class shipping agent in Singapore.

This will be a brief passage of tale about the latest Batty bikemares, as I know it has been more than a preoccupation on recent pages. On the way to the airport the engine gave up again, with the same loss of compression and great clouds fogged the streets behind....4th time in 2500 miles. Glenn was brilliant and quickly set about getting the bike to his warehouse, so that it wasn't on the street after the permitted time frame. I suppose I'd had enough by this stage and just concluded the engine was a dud for whatever reason. With Glenn's help we found an engine supplier (Kheng Moh & Co) who so happened to know some friends of his, and sold me a new Yanmar  engine. The previous 2 had been Chinese clones of this engine, but this was the real McCoy. In it went and fired up immediately. This was all done in Glenn's warehouse to the encouragement and entertainment of his colleagues as they unpacked Duran Duran's equipment that was heading for their concert that night.


A great great great (great) uncle of mine died at the age of 45 in Singapore of cholera in 1893. He had been the Lord Chief Justice of Singapore.  His grave has been moved as the city grew and covered with more and more roads and high-rises. So he is with a dozen or so notable colonialists in the shadow of the former governors residence. Glenn help me find it as it had been moved since the last time I saw it with my cousin Giles 12 years ago. Glenn's family  had originated from China and they have been in Singapore for 3 or 4 generations.  This included some terrible war years and the loss of his grandfather and uncle during a massacre. In recent years the Memorial to those massacred had to be moved because of a new road, and Glenn's family had to go through all sorts of bureaucracy to maintain a memorial, hence his know-how in finding my forebears. 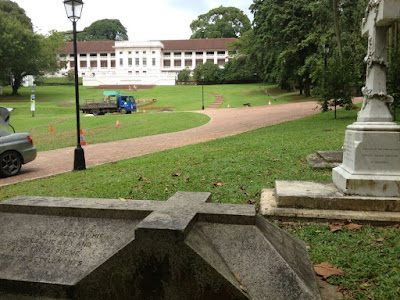 Unfortunately the meeting with our agent in Singapore did not materialise, so my plans for  developing that relationship has so far is yet to happen, but I did have a very good lunch with Arvind Agarwalla, who is a leading light in the Entrepreneurs' Organisation here and told enthralling tales of their success. His business, FACT,  have built a software that competes and betters the loved or hated (in my case) Sage software for accounting. He is setting up business in Europe and America and I'm sure will be a very big thorn in Sage's side.

New Zealand...I am trying to hate as much as I can in the few days I have been here, but will tell you more about this failing effort soon.