A Very Happy New Year to friends near and far.

I have to confess to awful naivete when it comes to many geographical matters. I'm ashamed to say that I did not know that the Amazon rose in Peru, or even that is where Machu Picchu was there. But I did know that the Andes went down through it and that I was going to have a lot of adventures on   Peru's roads....

I had a vague plan to try and turn off the main road into the mountains as early as possible. There is, according to Mr Google, a route through that I thought would be fabulous to do.  My aim was to reach Cusco for Christmas, where I knew there would be few likely lads to meet up with. Cusco on the map looks relatively straightforward and even going the mountain roads rather than the faster coast route should be more than doable in the 10 days or so that I had. 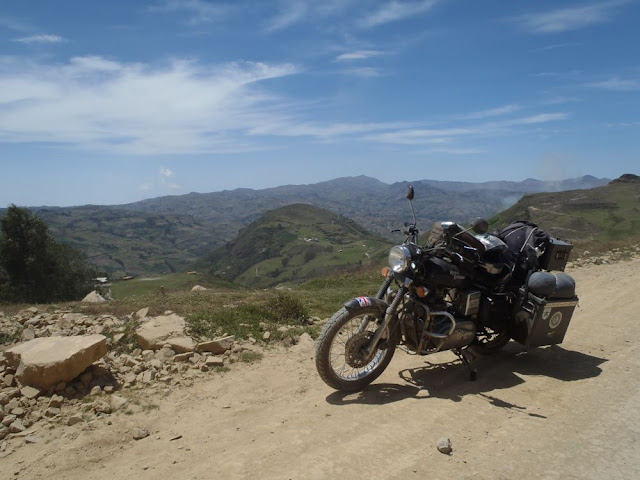 So off I set. Preparing oneself for natural beauty is a folly, either it exceeds it or you are disappointed. I suppose the Himalayas had always taken the crown as far as my gauge was concerned but I have to say that what I've seen so far in Peru, the Andes are breathtakingly beautiful as well. Along with the natural beauty, the people you meet high up and along the roads are the same hardy folk that altitudes above 3000 m seem to generate. Generous to a fault and delighted  to share what they and countless  generations before them have had as their home.

The roads are only partially paved. Batty took hundreds of miles of bashing and bumping  along gravel and mud tracks at speeds between 5 miles an hour and 20 miles an hour. Slow progress but not a moment  of tedium as one was always surrounded by breathtaking views. 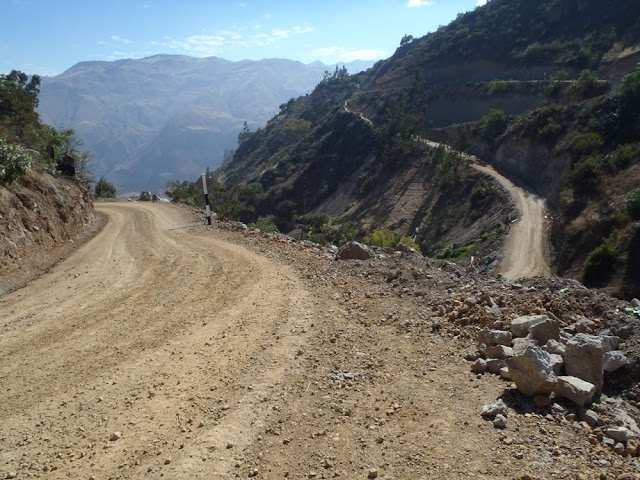 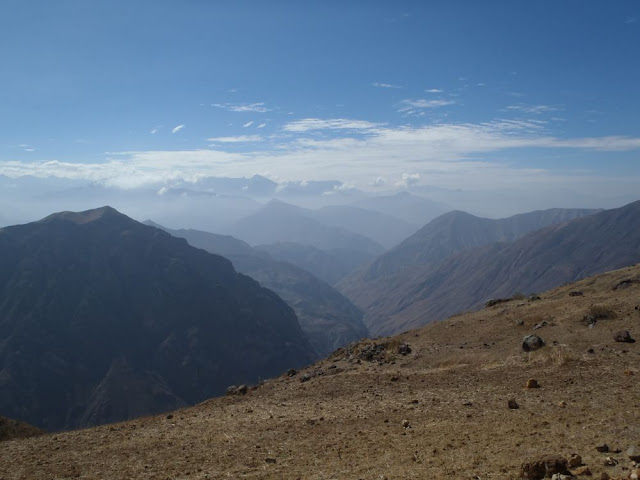 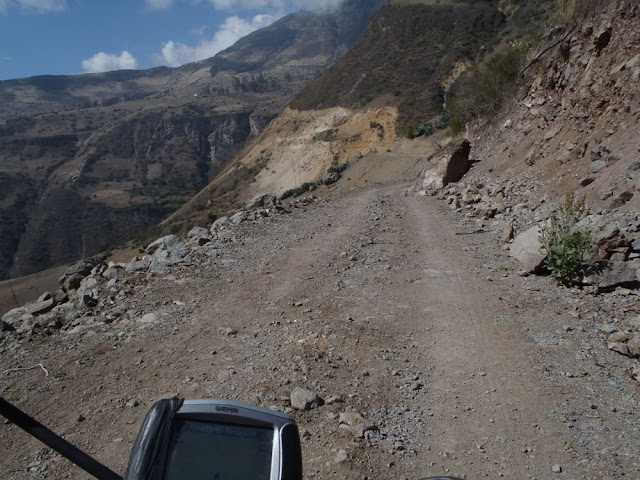 It was just around the corner from this shot, that I came across some road workers who told me that the landslip had blocked the road and there was no way to get around it. It was slightly depressing news as it was going to take me another day to backtrack on to the Pan-American Road. I was fairly philosophical given the beauty of my surroundings, and it was just a way of seeing the same treasures again.


I was pretty confident that having spent a day driving on good roads by the coast and then pretty good roads heading inland I was going to make up time. And all was going well until my Spanish seem to confuse the people I was asking clarifications on.  Apparently Huanuco sounds just like a  small village five hours north of it. The GPS was no use on these roads and had no knowledge of them, a Google map I had saved only told me limited information. I eventually ended up in a very humble village and set off at 7 o'clock the next morning to do the first of four days of between 10 and 14 hours to get to Cusco for Christmas.

The distance weren't all that great, but the roads only allowed a pretty gentle pace, everywhere was fantastically beautiful, and in spite of the rain that had me soaks most days, they were some of the  funnest and most exciting days of the trip. 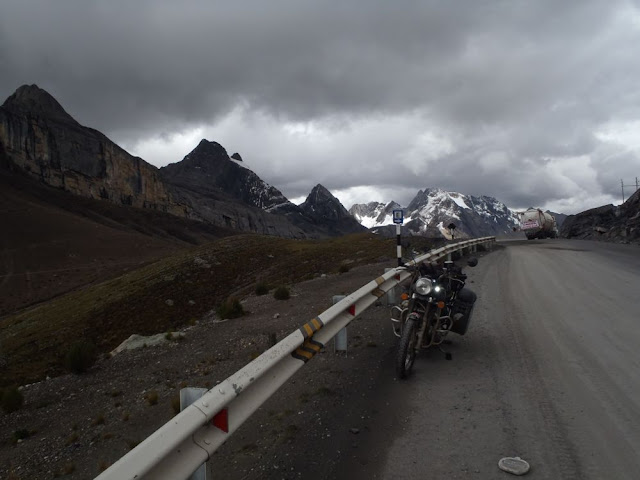 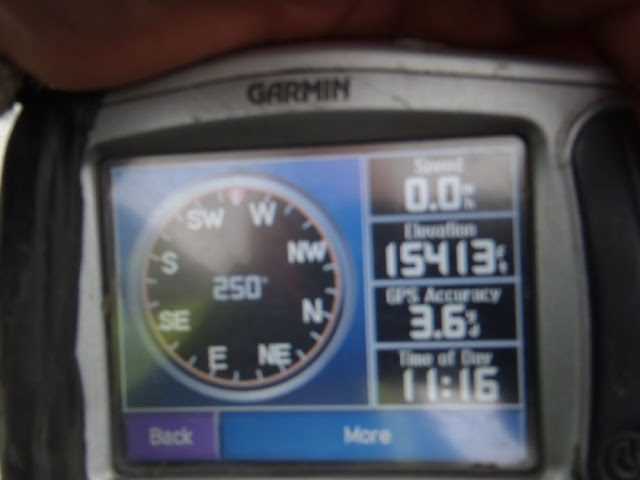 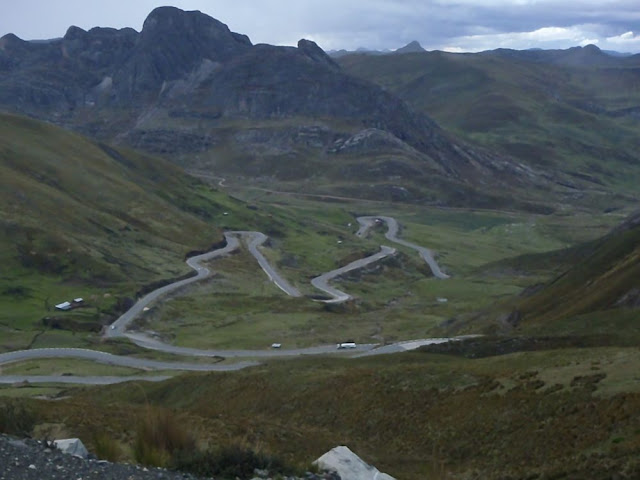 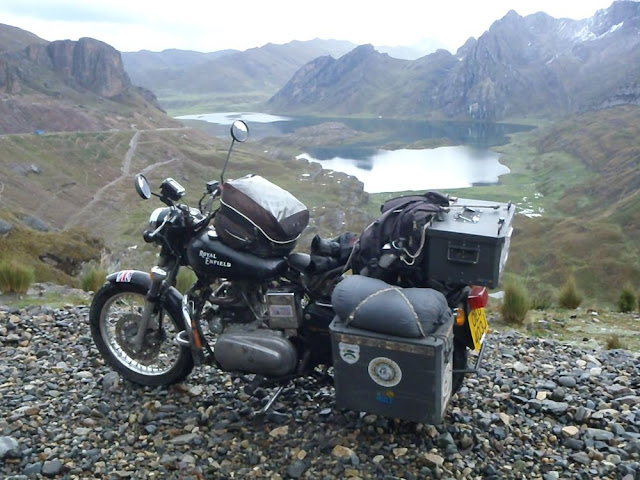 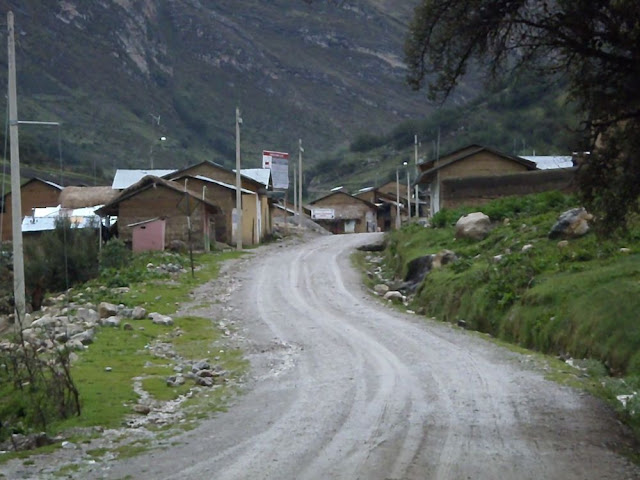 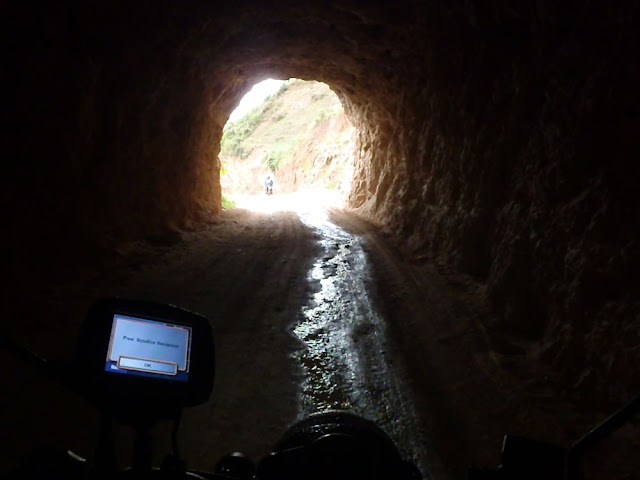 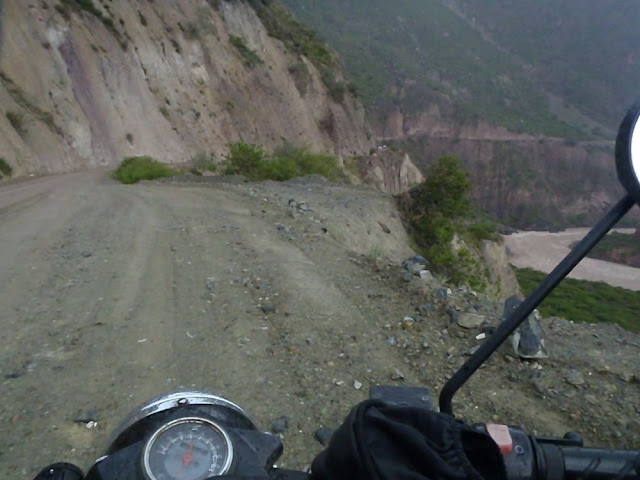 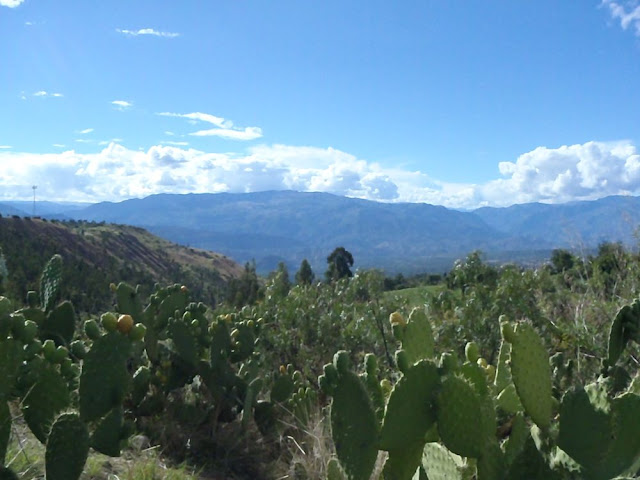 The day before I arrived in Cusco, I received two emails. One was from Aaron and Serafina saying that they had arrived and where they were staying, also that there was a guy called Glen who was interested in my trip. The second email was from Glen, saying that he had come across the blog and was interested in meeting up. This turned out to be very fortuitous as Glen is grt company and he has a phenomenal knowledge of Cusco and South America in general, having been a regular for the last 20 years.

We met up and he introduced to me or showed me all that I needed. This included the best places to drink and eat in the city and it has really made my 9 days here all the more enjoyable. The other bonus whilst I've been here has been staying at the Wild Rover hostel, which is extremely high octane and a great melting pot for travelers. They had a great Christmas lunch and a wicked New Year's Eve party that will live on in my memory for a long time. 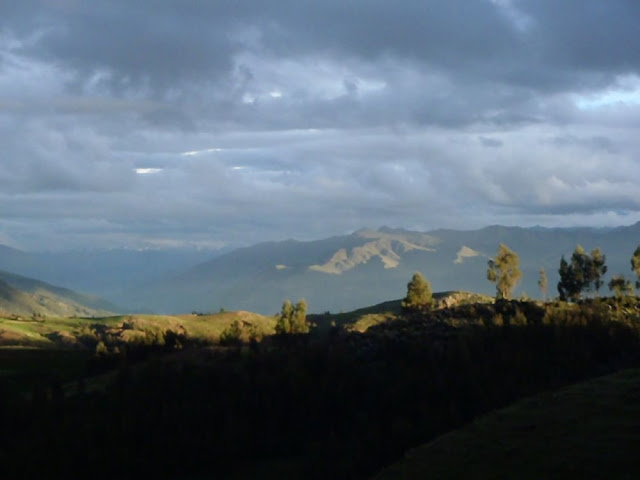 We took a bus and a train to the Aqua Calientes, the small town that services all the tourists (1000 a day plus) that go to Machu Picchu. There was an option to ride but I'm afraid my ass had not yet recovered from the drive to Cusco. There was also the slight disincentive that poor Taka had been knocked off his bike crossing a dangerously flooded ford on his way back from Machu Picchu the day before. Although he was fine, his bike has taken a lot of hassle to put right. 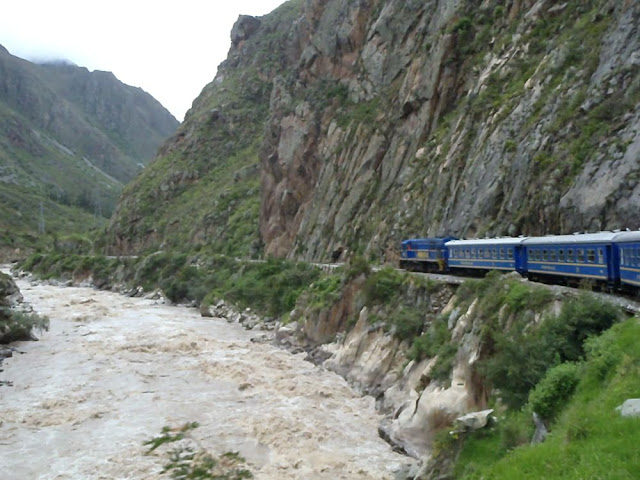 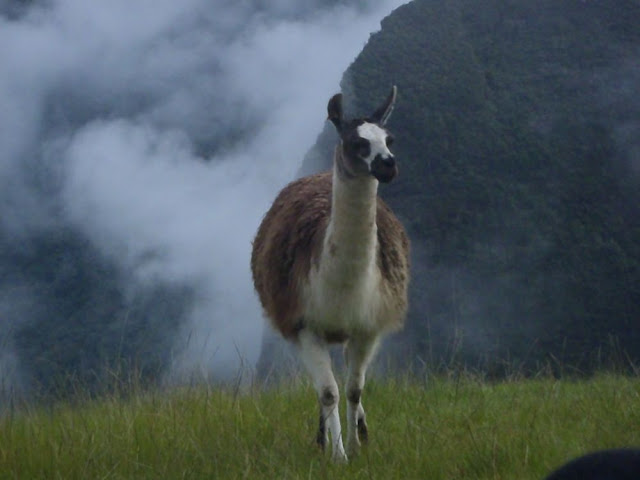 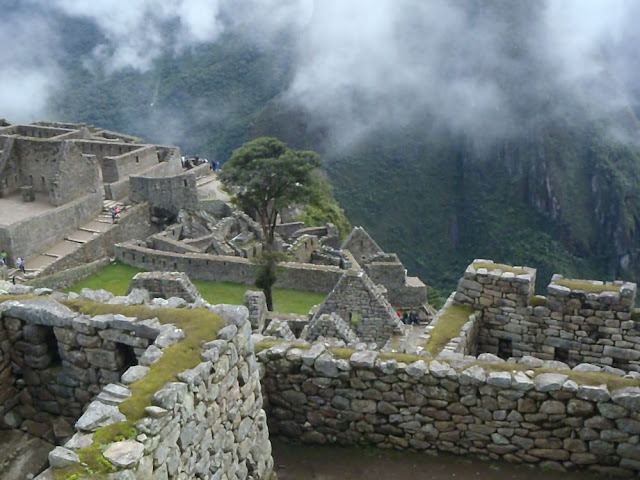 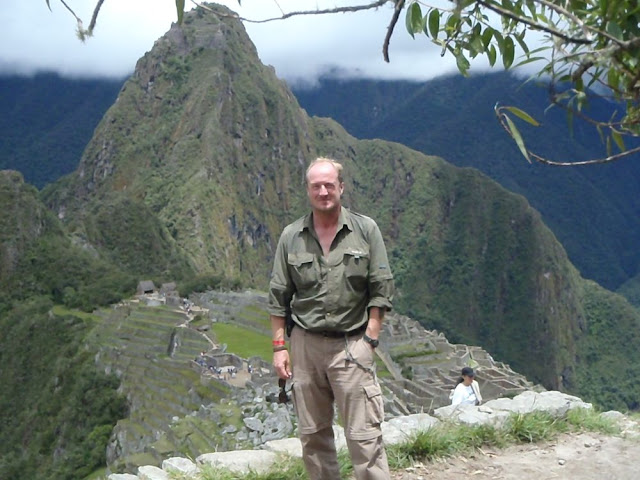 I guess that the day at Machu Picchu will be one of my most treasured on the trip.  It is an extraordinary place in an extraordinary setting. The idea that 700 people lived on this mountain edge for the dual purpose of providing the King of the Incas a summer palace, and providing a perfect spot to get excited about when the sun is in solstice twice a year.
I am now off on a few days journey to the Amazon. I will leave Batty here and take public transport, before a boat becomes essential. The trip has been organised by John, another South American old-timer and friend of Glen's. Great company the two of them, and Paddy's bar a fine hostelry in the middle of South America, to host us. Today Glen made a short video/interview of me. He is making a documentary of his own journey through South America on a motorcycle and interviewing those he comes across as are doing interesting things (in his opinion). His Blog of all his travels, interviews and book reviews is: http://www.madaru.net/
Posted by Unknown at 10:45 PM