The hope had been to leave Uyuni in Bolivia to get to Argentinian border on the Sunday, giving a day to cross during Monday. What I didn't know was that the rain, that had been almost non-stop for the 4 days I had been in Uyuni,  had caused a couple of rivers to burst their banks. The discovery of this took an hours drive along the very muddy and gravely road…Batty speed being reduced to between 5 and 20 mph. 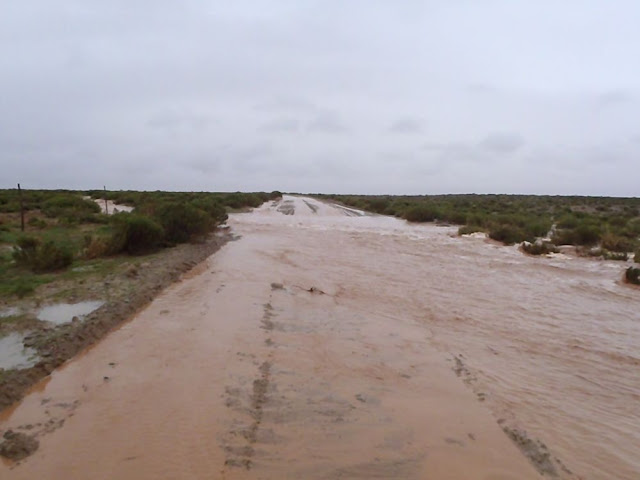 Attempts to find another route around the first flood held some promise, until a guy in a 4x4 turned up, he had been the first sign of life for an hour, he told me that this river was not too bad but the next one nothing was not getting through. The lack of traffic was a hint. Previous experiences told me very loudly to about turn and accept the extra day's travel and go back the way I had come via Potosi. Argentina was not going to disappear, unlike my fingers and toes which got colder and wetter than anywhere else on that sleety 6 hour ride.

The debate still rages in my mind as to whether the copious amounts of coca leaf Mojitos that Carmen and I had drunk the night before putting the world to rights, helped or hindered the day. Whichever way it had been great to connect again having not seen her since Columbia. She and Michael had ridden very quickly to the tip of the Argentina, Ushuaia. Michael had to get back to Germany, leaving her to explore the continent a little more with a backpack.

The contrast between the previous six weeks in very high country, usually around 10 or 12,000 feet, and the descent into Argentina was a fantastic experience. Being cold and wet on the bike had sometimes been testing, albeit in staggeringly beautiful landscapes and often with good company, had warn me down a bit. Certainly once the sun's heat and the extra oxygen hit started working, one's feeling of good health returns with vigour..

It would be erroneous to claim that I was not wary of the political tensions between Britain and Argentina, and had been advised to stay clear of the subject as much as possible. It took me five hours to get across the Argentinian border, a confusing system that did not really conform with usual crossings. This combined with large numbers of people and a final hick-up caused by my lack of 3rd party insurance and a 9 o'clock at night to scurry around to print off a worldwide insurance that I had. This insurance wasn't sufficient for Argentina, but absolute promises to buy some in the morning eventually got us through. The poor fellow at the border wanted to go home to bed. Anyway the point was that I met nothing but good humour and enthusiastic conversations about the Malvinas right from the start…initiated by others. The 2 Union Jacks on Batty may have prompted the conversation, and I had toyed about taking them off, but thought to see how things went. Nothing aggressive but a seemingly deep trench attitude of absolute claim that goes back 200 years. 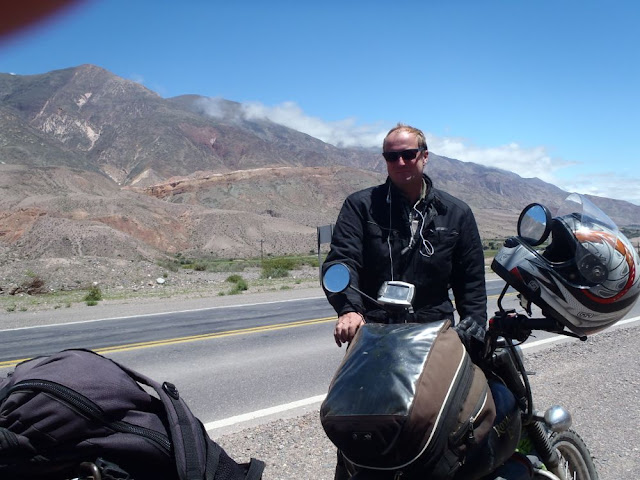 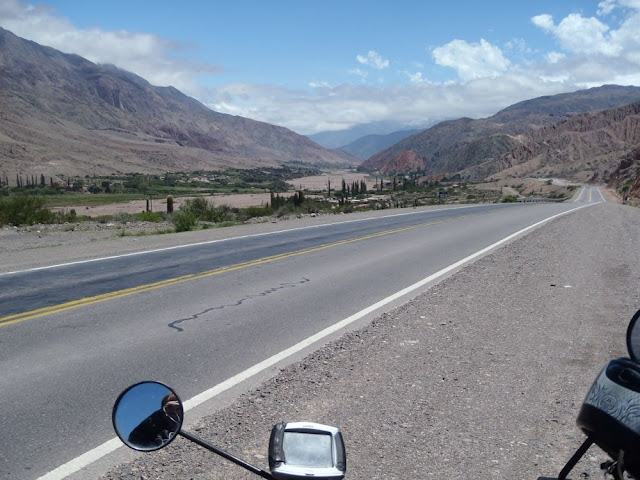 Salta was a very pleasant overnight stop, like being in a classic southern European city, full of grace and architectural delights, saying nothing of the stylish and often very beautiful inhabitants. The next day was probably one of my favorite journeys particularly between Cachi and Cafayate. Although not paved, every new turn as it followed a river, had endless new forms of landscape intrigue. Nothing particularly high, but just beautifully honed forms, courtesy of mother nature. 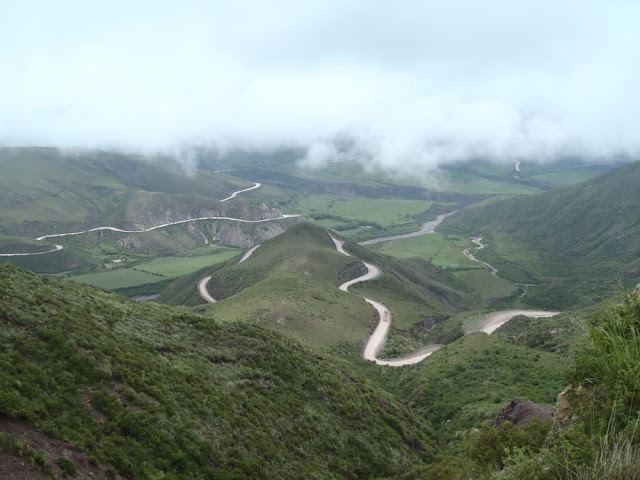 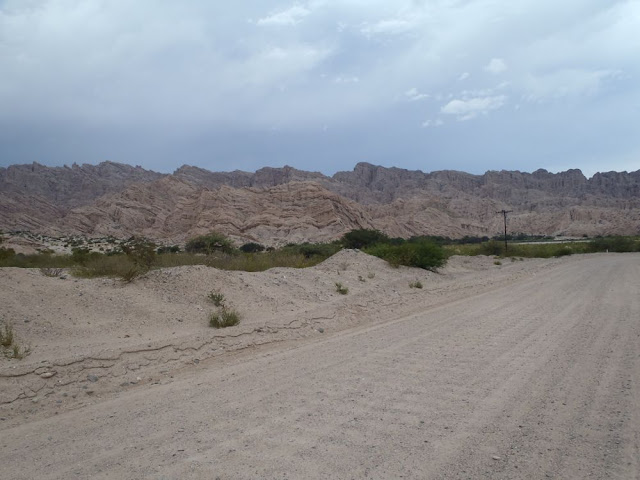 It was along this road that I met Ross and Judy. They were in a hire car having had a nasty accident on their bike two days before. Going down the road on their backsides at 60 or 70 miles an hour was no joke, but they were fine apart from the odd bruise and their spirits were ok at that stage, all they want to do was to get back on a bike. Theirs had been completely written off in the accident, caused by a glass-like surfaced road which combined with rain and doing a very normal overtaking manoeuvre.
I was to meet them a couple of evenings later, and over a bottle or two of excellent local wine heard more about their lifelong plan of driving from Alaska to Ushuaia, only to be dashed by the crash and their profound disappointment by the turn of events. A couple of days later I saw on Facebook that they had given up trying to drive in the car all the way south and were flying home to Australia from Santiago.

The word Mendoza I had seen on countless bottles over the years, and driving into the city surrounded by thousands of acres of vineyards held great promise. But before the testing, there were some rather urgent requirements on the Batty front. For two months I had put her through and on roads way outside her comfort zone. The frame had cracked again in front of the engine so before the day was out I found myself at Ariel's workshop. It was Saturday afternoon, and he was closed although happy for me to leave the bike with him over the weekend. Then he handed me a beer and along with his neighbour George and various other people dropping by,  the next six hours was one of much humour and loads of nationalistic quips. This hospitality extended to dinner, or I should say Asado, the grilling of meat over hot coals…barbecue Argentinian style.

Unfortunately I must have swallowed a dirty fly or some such, and for the second time in the 19 months I've been away, my stomach rebelled and sleep did not come until 5 o'clock in the morning.

Because we were having our annual 2 day work meeting, I had booked into a more comfortable but rather functional business hotel for the week. Catching up with the cream of the Illustration world and lots of other folk was, as always, stimulating and only excited me all the more for my return.
I did manage to get a city tour in, as well as a wine tour. On the city tour there happened to be a couple of schoolgirls visiting from Buenas Aires with their parents. They were dispatched to talk to the English man and practice their English. They were lovely and friendly, and I don't know if it was just their politeness, but they did say that the one country in the world that they wanted to visit was Britain. I think a lot had to do with various heartthrob boy band idols. 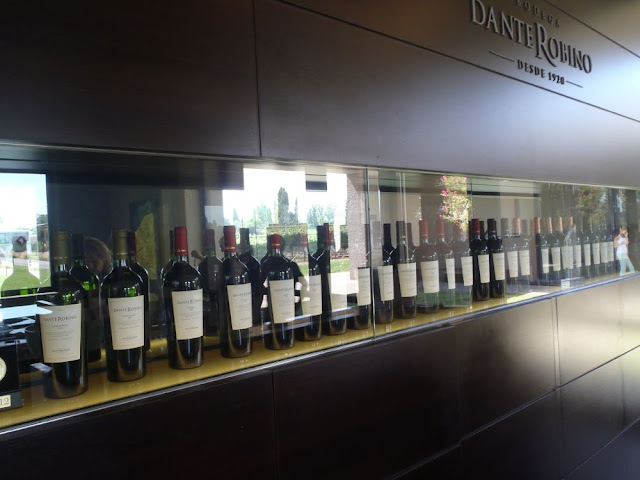 On the last evening Arial and his lovely wife Paola, and enchanting Adrianna, their young daughter, invited me for dinner again. This time with about 10 others and a goat kid as the menu topper.

George was there again and as chief chef. A delightful and funny man, he led the charge on the only Englishman present. As each delicious morsel and beer came my way, I must confess to conceding a little bit more of the Falklands much to the delight of the assembled. The call for "Malvinas para Argentina" met with little truck from my suggestion that the Falklands should be for the Falklanders.
It was not a debate I was going to win, but it was in very good humour and nobody wants any more blood spilt. The only concession I did get was the acceptance that it was currently a political smokescreen to disguise the unpopularity and failing economic policies of the administration.
As the evening wore on George became braver, and ended asking me how many prostitutes I had been with on the trip. What do you say? If I told him the truth he would not have believed me, so I told him about a 1000….great excitement….then he asked how much did it cost each time?…$1000 on average I confessed, where upon he offered me his backside.
I crossed over to Santiago in Chile and met up with various different friends that I had met along way. Georg, Jacek and Markus on the first evening, Gordon and Ben a day or so later. All in fine spirits and it was great to hear all their different tales of their journey to date, some too fruity for this family blog.

Gordon was just back from a record breaking assent to 5700  meters on Sean Dillon's 90cc Honda Cub, along with his brother Gavin Dillon (Still riding to Santiago by the time I left, sadly). The Guinness Book of Records are refusing to acknowledge it…brutally saying that it was not that much of an achievement, although accepting that it was a record for the machine…. See http://hondavstheworld.com to be your own judge.  It doesn't really matter what Guinness editorially think, the fact that three Buccaneer type guys decided to do something extraordinary with no backing or equipment beyond what they already had, is enough for me. Not only did they succeed, they were also only a few hundred metres off the altitude record for any bike (6300m) reached, which was made by a highly resourced team last year, and the three were only prevented from beating this record by unseasonal snow.

On a 2 day, 500 mile ride south of Santiago into the Lake District, and at a stop for fuel etc, a guy on a large Yamaha came over for a chat. Juan Carlos farms 200 kms south of where we were. Such is the kindness of the man, he offered his plane if I ever needed spare parts flown in on my trip south. Hopefully nothing like that will be needed, but the offer has been completely in keeping with all that I have met in Chile.


Next is a few days with my old Devonian friends, Binny and Jean-Paul and their family. A visit 20+ years in it's making, since their wedding. Then a 2 week push to the bottom of Chile, hopefully joined in part by Hugo and maybe Gordon if we cross over.
Posted by Unknown at 2:10 PM