Last few days in Uruguay and South America, and life aboard Grande Cameroon crossing the Atlantic.

Our ship, the Grand Cameroon, was five days behind schedule. This could have been a boring delay but as it turned out it gave me an excellent opportunity to catch up with Marcus, who I had first met in Nicaragua and then again in Chile. He had made his way over to Uruguay and was converting a delightful property in the countryside near Colonia from a high quality bed-and-breakfast in to equally charming apartments. The property was owned by the Andrew and Isabel who have lived out here for many years. In fact Andrew set up his travel company 25 years ago taking Swiss and German clients on a similar trail that I have been on throughout South America. In those days there was very little tourist infrastructure and the roads were nearly all gravel. He has stopped now as the adventure of exciting and largely undiscovered lands has largely disappeared as paved roads, hotel chains and fast food outlets have spread across the continent. They settled in Uruguay, as for them it offers the best of South America in terms of everyday living security and standards.
Between the three of them, I was treated very very well, with some fine dinners, many comforts of home and engagement in all that they were up to. The most dangerous being their own wine. Made from the local Tennat grape, which came originally from France but is now rarely used outside Uruguay. It is 16% proof and becomes more and more delicious as evening goes on. They have enough vines to harvest 250 bottles, which keeps them and their friends happy throughout the year.

One day we went to a barbecue, held on a beach nearby. It was a public holiday and this was a community gathering which involved the roasting of a whole cow. This was fun, but not as much fun as a ride in the back of Andy's 1926 Model T Ford pick up for the 5kms down to the said BBQ. Restoring old cars is a national habit and one Andy enjoys a great deal… Fantasising about driving his Ford back to Detroit where it was made one day.… Boys and their dreams!


After three very happy days I went back to Montevideo, a four hour ride. There the news was that the ship was another day delayed. Sean, of Hondavsthewww.hondavstheworld.comworld.com fame, and Taka were in town for a few days. Not only did they want to visit the town but like thousands of other people in Buenos Aires, they took  the three hour ferry across the River Plate to Montevideo to get out lots of US dollars. Dollars can be converted on the black market in Argentina to go twice as far as the official rate. In the two months that I've been in the vicinity, the black market rate has changed from seven Argentinian pesos, to 10, the official rate is five. Apologies, a slight diversion onto a subject that is the hot topic of the region, prompting speculation about the outcome of the current Argentinian government.

Ever the enthusiasts, Sean suggested going to a football match. Something I've never done before and happily signed up for. The match was the finale of the local derby between two arch rivals; Nacional and Penarol. This annual match was in the same grounds that the first ever World Cup was held back in 1930 called the Centenario. It was probably like going to a Manchester United vs Man City game. The guys who organised the trip were National fans, so we wore blue, not yellow, and were funnelled to one end of the stadium. Tens of thousands of people hugely excited about the game converged, revved up by cheerleaders and an insane amount of fireworks. Unfortunately our team, who were said to be the favourites, were squarely beaten four - zero. Possibly the sun shining directly into their eyes may have hindered them, but what the experience lacked in footballing prowess, was more than made up by frenzied and electric atmosphere generated by the fans. 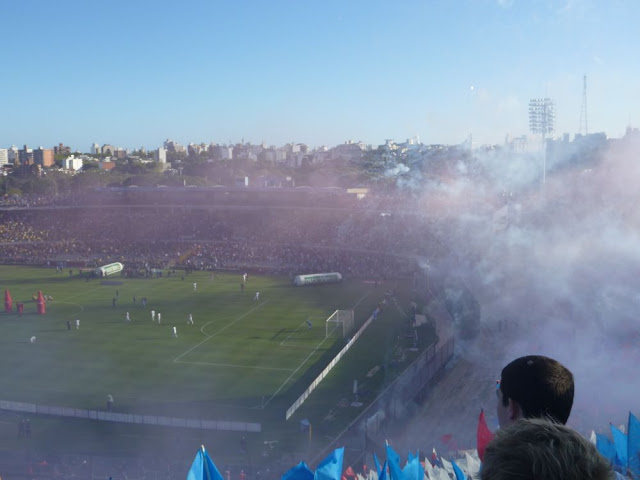 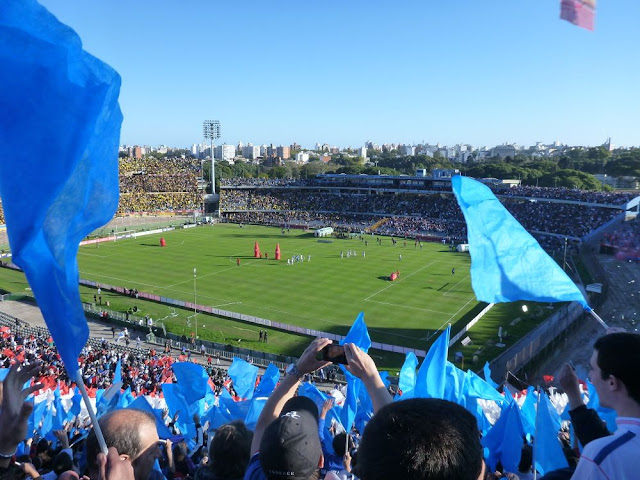 2 days later we eventually got on board. There are two other bikers, Steve and Wayne, from Switzerland and Rhodesia(he left when it became Zimbabwe), Thomas from Switzerland in a four-wheel-drive, Hubbert and Anji from Germany in their Land Rover, and Evi and Jean Carlos from Italy in their camper van.

Nervous excitement was how I felt coming on board, for the beginning of a 3 week voyage to Hamburg, Germany. I had been anticipating this near final leg of the journey a great deal. Alas this feeling dissipated rather rapidly as there was little sense of welcome or engagement from the crew. Whilst polite it was quickly apparent that this was a working ship and passengers were there as a very minor part of the ship's purpose. We were shown our windowless cabins, perfectly comfortable in a utilitarian way, told that breakfast was between seven and nine, lunch at 12, and dinner at six. And that was about it. We were left to find our own way around. This did irk us all, feeling like unwanted guests was not what I had understood from others who had raved about these trips, who had had been given quite a free rein in terms of visiting the bridge, seeing the engines and generally interacting with the crew etc. However after a couple of days it was clear that this was not going to be the case, so we just had to accept it. Language was probably the main reason, as the crew is largely Italian, and their English pretty basic. Apart from Wayne, the other passenger's English was pretty limited, making conversations fairly basic and general. That said we seem to get along alright in the main and have enjoyed quite a few laughs.

For several months, knowing that there was going to be a prolonged period at sea of about 3 weeks, I had conjuring that it would be a perfect time to pull together the blog with some additional writing efforts and produce some sort of printable account. The first few days at sea had me reading through two years of blog. Respect for friends and family who laboured  through the shocking English and muddled stories has grown all the more, whilst utterly understanding any who have found more interesting things to occupy their time, I know I would have.

As a result of this re-reading, for the moment I think that it is not a particularly extraordinary story, nor one I have the skill or wit to make into one. There are many very well told accounts of great journeys around the world on motorcycles, and if anyone is particularly interested in Batty's journey, they have the blog to wade through.

That all said, I have been writing a fair amount as a sort of summary/conclusion of the last two years, and in fact I'm grateful for the near prison like isolation the ship has given to do that. In the fullness of time I suppose I will put them on the site, but may wait till the perspective of a few months at home before doing so.


Life on board has a routine that starts at 7:30 AM when my alarm clock goes off, no windows making this a necessity. Some press ups (40..just, and not very low ones), then breakfast after a shower, followed by an hour and a half walking round the deck listening to an audiobook, which is currently the "The First American", a biography of Benjamin Franklin, what an accomplished man in so many areas. Then a couple of hours either writing, reading, listening or talking before lunch, which always include a lot of pasta. Then maybe a siesta, a matinee film to watch, some work bits and pieces, or more reading and writing. Then another hour or two walking around the deck to combat the pasta. I have played ping-pong a bit with Thomas as a alternative time filling fun.  Dinner is another 4-5 course Italian belt challenging spread..very tasty by and large….prepared by the larger than life character of Guiseppe, and served by the friendly and hard working steward called Dominico, who also makes our beds and cleans all the living quarters. There are some card games played, but the evenings have mostly been reading or watching films.

So far, after 2 and a half weeks,  the sea has been very flat, and we do about 20 knots, covering about 450 miles in 24 hrs. However we are approaching the Bay of Biscay and the seas are mounting…we have not been told how high it will get, but when one is a huge 220 metre long machine, carrying thousands of tons of cargo, I am sure it helps to flatten the worst of it. We have had three celebrations so far, 2 birthdays and crossing the equator. All involved one bottle of wine between the eight passengers. A rather dry ship.

Amazingly after 2 and a half weeks we have still had no safety drill whatsoever...

We have been able to get off the ship twice, once in Brazil for about four hours at a port called Vitoria, and then seven days later at Dakar in Senegal. Good to touch land, but not long enough to do much other than grab something to eat and connect to the Internet for email etc. A few flying fish and one family of Dolphins have been spotted on the whole trip, along with a few companionable gulls, but no albatross sadly. It has been a fascinating exposure to commercial shipping, and one I would have loved to have had the opportunity to find out more from the crew, but it was not to be. Sometimes we see loads of other ships, as far as the eye can see, mainly near the ports we are heading to. In mid Atlantic several days pasted without anything on the huge 360 degree horizon.
Posted by Unknown at 8:47 PM