Spent 2 happy days with Charlie Haydon, with the great bonus of Pat May arriving for the weekend a couple of hours after me. He had been threatening to come along, and delighted he did. The three of us go back to our late teens, when the world seemed resolve around bikes, girls, parties, booze and the odd other stimuli. The order of importance fluctuated, but in essence that was it. Why it seemed complicated at the time I am not sure, but it was a lot of fun. 30 years on life revolves around, oh, bikes, girls, parties, booze, family for some, business / work, mortgages, pensions and health. More complicated maybe, but somehow less stressful.
Yesterday we went to the coast and enjoyed moule fritte at a seaside shack, which with a bottle of local cider was a fabulous dejeurne. We stopped at a US world war 2 memorial and graveyard site. 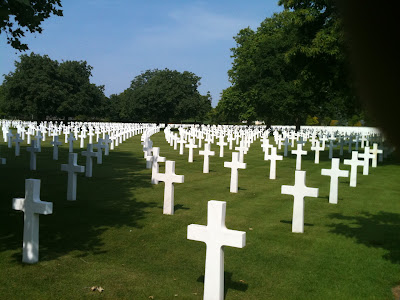 There was a very old American chap who looked at least 90. Difficult to imagine his emotions, we assumed he had to be there to see the graves of his fallen brothers. On bidding him good afternoon, I got a rather lost look, a poignant moment. On the way hope we delved into how long that memorial would be there for, prompted by the much stated 'never to be forgotten'  type plaques. 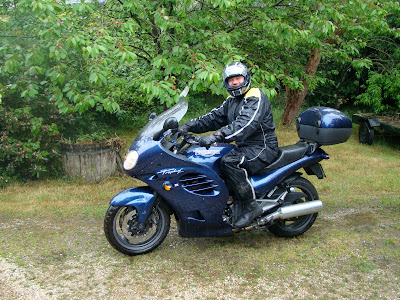 Leaving Charlie's in the rain 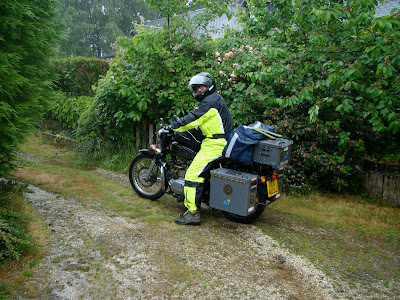 5th June
This morning the plan was to have a look at and clean Batty's injector, before leaving at noon.  I had gone back on to almost pure veg oil and it was a mistake as they had coked up.

A 10 minute job, but typically in Harry's world of maintenance things go a little wrong and I dropped a washer down the injector hole. Luckily with Charlies' kit and steady hand it was recovered. The upshot was leaving an hour late. Pat joined me for the first hour on his Triumph before setting off for the ferry home. It really tipped it down for most of the run and camping was looking challenging. Luckily it cleared up by the time I got to looking for a camp site at 6ish.

I am writing after my first camp supper on the first night alone, 150 miles down the road. I have about another 350 miles to go before hooking up with Philippe Chandless. I plan to do it over a couple of days. 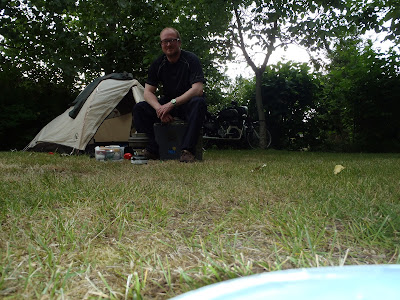 As ever wanting to plug pals businesses on this blog, Charlie runs a great self catering holiday cottage  setup and for £400 per week a family can come an enjoy the remoteness, beauty and tranquility of Normandy only a couple of hours from the ports. Www.normandyselfcateringcottages.com.
Pat has a property search business in Devon and after 20 years in west country property has a knowledge and insight that is difficult to match. Www.qwest.co.uk

Tipped it down overnight, but my Big Agnes tent lived up to it's promise, however my boxers and socks (they like to be washed daily) did not dry on the line alas. 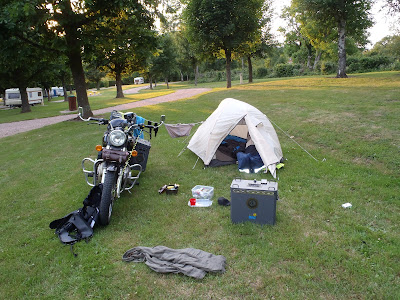 Beautiful  run to near Vichy.
Spotted that the clutch cable was beginning to fray at the lever end. Thought this could be part of my clutch worries, that I have been adjusting most days a quarter or half turn. Now there is no adjustment left on the main adjustment. Replaced the cable, which took about 30 mins and then vigorously oiled the other cables on the bike, I should have done this more regularly, lesson 105 for the trip.
Henry is sending out a couple of replacements along with some hopefully remedial solutions for the clutch adjustment, which won't involve too much mechanical work, fingers crossed.

Having rather slated the Garmin satnav earlier, I have to take it back, certainly in part, as it has taken me on some absolutely stunning roads. By selecting the no highway and autoroute option, I have travelled along just fab roads. There have been a few single track roads, but 95% have been 2 and there is hardly any traffic. Just perfect for my 30-50mph speed range and lorry avoiding quest. 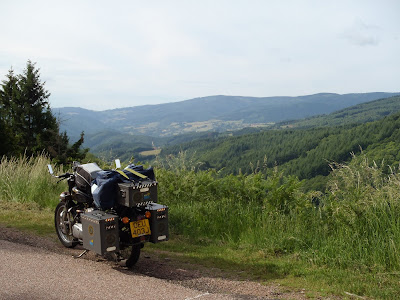 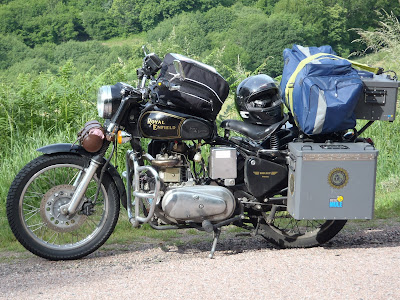 The day carried on with a broken speedo cable, and on going clutch problems, so much so that it was easier to stall Batty at lights and then find neutral, before restarting. Henry has sent an instruction on possible things that may be causing the problem.
Posted by Unknown at 6:58 AM