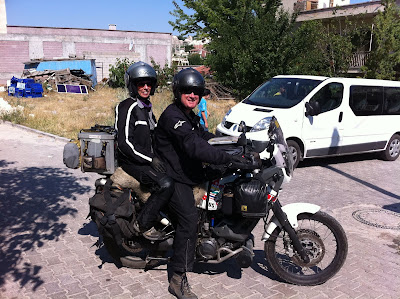 Off to Malatya in morning. A full days driving and all up high in the Anatolyan mountains and hills, all above 1000 m and up to 1900m. Stunning roads and all dual carriage ways with hardly a car on them. One comes across a lot of road works but that has been the case on every road I have been on here. The investment is staggering, then I heard that the Turkish last quarter economic growth rate was 11%, making it the fastest growing economy in the world. I am going to have a chat with Miranda, who looks after my stocks and shares and see if there are some funds worth looking at. With the proposed entry into the euro and uniquely positioned between East and West, a stable  democratic government (albeit polarizing and slightly non secular), property values set to double over the next 3 years, it would not be a stupid punt.

I have been on the look out for a sheepskin to put on the seat. Apparently it will do wonders for posterior comfort. Not that I suffer much, but any additional luxury has to be good. Anyway the point is that in Malatya, where I stayed, there is a market by the hotel with lots of stalls selling wool, but non appeared to be attached to the fleece (that was quite a feat of sign language) I was offered one, but the shop keeper had been sitting on it for the last 20 years by the look of it and it would have been wrong to have torn them apart, yuck. The qwest goes on.
During this market meanderings, a chap came up and said hello. He was in his 30s I guess and said he had lived in the UK for a few years, in Bristol and Reading, but was sent home when his visa ran out. I asked what he missed most. The women he said, they are the most beautiful in the world. I tried to compliment him on the many Turkish beauties I had seen, but he would not even hear a comparison. That is something I miss too, and only gone a month....

Bit by bit, the further east I've gone it has started to get dryer and dryer, and green a more precious colour on the landscape. The people outside the towns are very rustic, with a great many cattle and donkeys wondering along and across the road.  The trucks are slower, and Batty's overtaking skills are getting practiced on an hourly basis now. There have been no Ferraris in Turkey, and only one in Greece. 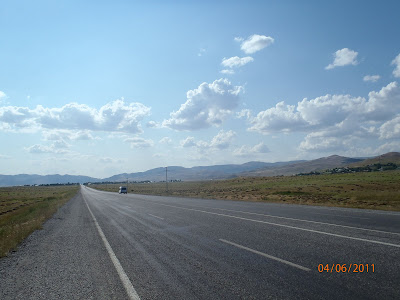 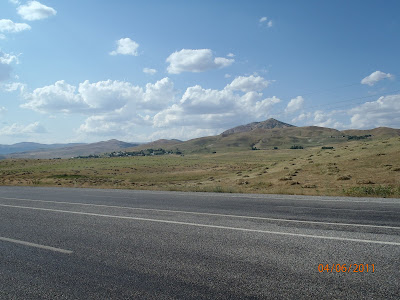 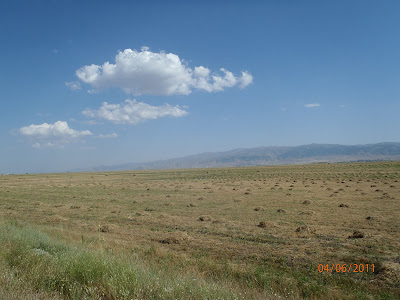 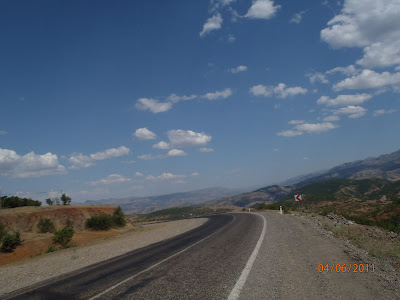 Stayed in a very suspect Otel in Mus, the loo stank, which is not a nice thing to clean ones' teeth next to. It is the worst so far, but they have been kind and allowed Batty to stay in the office over night. 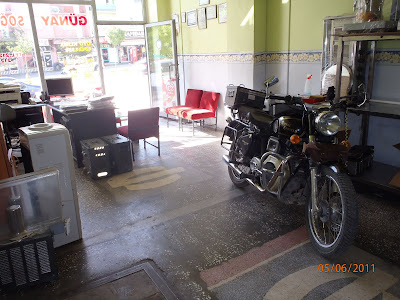 Headed for the frontier town of Dogubayazit (seems to be known as Dogbuscuit by some).

Lovely drive and a lot reminiscent of the Highlands (Scotland), but bigger temperature swings. 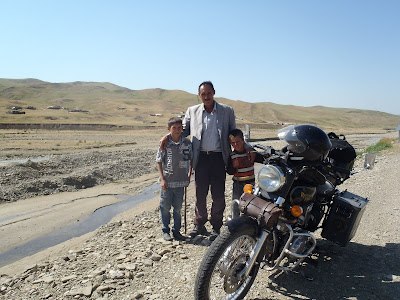 A local herdsman and his boys 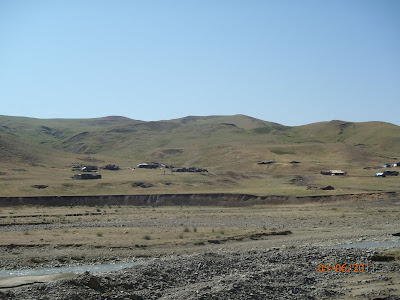 A long shot of his tented village...he offered me a bed for the night...as I understood it, but alas it was mid morning and I wanted to push on. 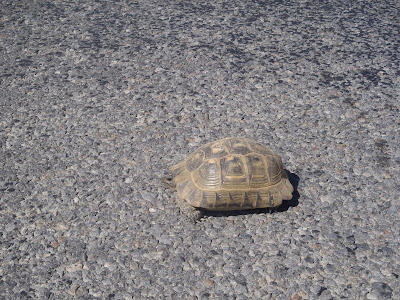 Another local, no regard whatsoever for other road users......
Parked up for a break and photo shoot, when a military patrol stopped and asked me what I was doing. No great issue and a few handshakes and pointing at the map, had them smiling and leaving. 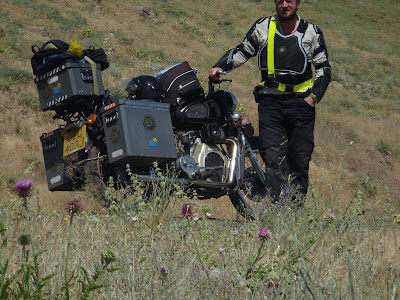 Just before the law arrived and stopped the next shot...which would have shown a larger brow. 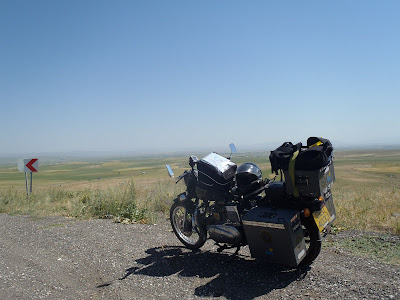 Nice spot though, worth defending
Most delicious trout for lunch, and prepared at a road side garage restaurant, funny how that can be.

As I head nearer Dogubayazit (MAP) I saw the first sign post for Iran. Although I will not be going there till next week, it is exciting to be this near.

I met Huw in a cafe, where he was supping and advised me the establishment's offerings were good. We got chatting and heard about his 18 month journey around North Africa and around on to Turkey in his Landrover Forward Control 101. 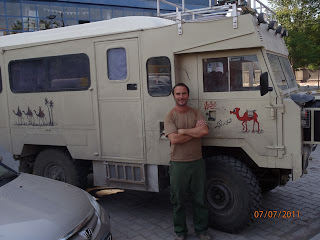 We teamed up in the morning to go and see the Palace of Ishak Pasha near Dogubayazit  that is 4 miles up the hill. Amazing place, with brilliant views, alas hit by Russians and earthquakes I believe and now needs imagination to see it's full glory of yesteryear. 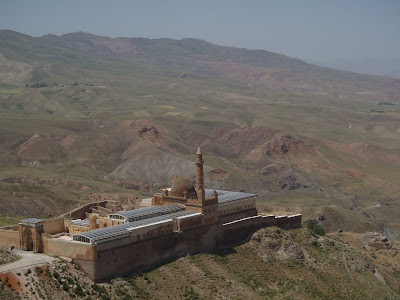 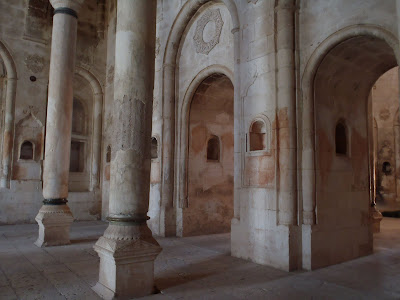 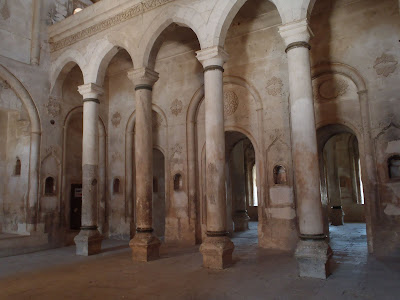 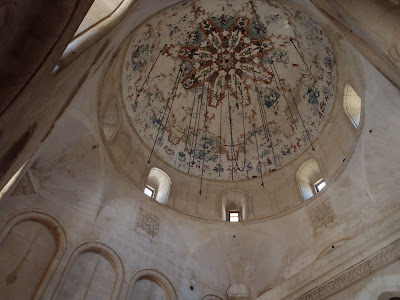 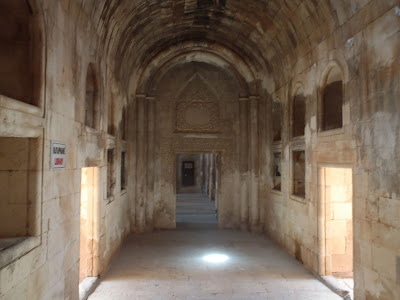 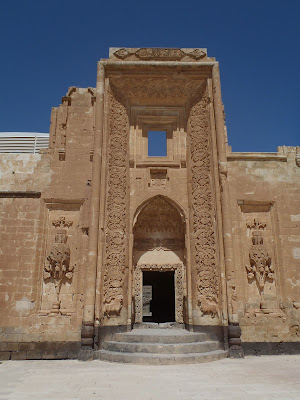 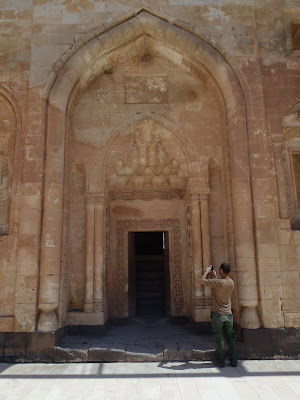 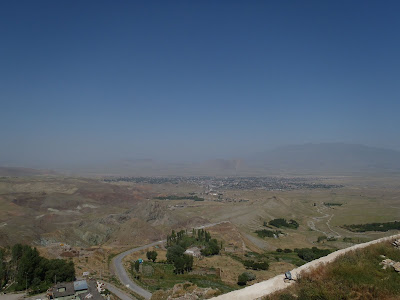 This town is in the shadow of Mount Ararat, Turkey's highest at 5000+ m. 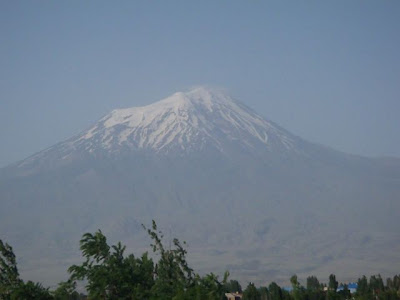 Noah landed on top of it as well, you may remember.
Posted by Unknown at 12:18 PM