I had planned to head for Manali, which is about 500kms south of Leh, and then turn left into the Spitti Valley, which would have been another 3 days driving through what sounds to be amazing scenery. Plans changed as I approached Manali, it had started raining in the evening of the second day and I woke to more rain on the third, and I thought I had to get to 'civilisation'.

Leaving Leh, the road runs over the second highest pass in the world, Taglangla at 5350m on my GPS. It runs across high desserts, up and down beautiful valleys. Mostly heavily pitted, rutted gravel and sand roads, with about 25% tarmac, which is such a blessed relief, particularly for my road tryes…more on that later. The road is only open for about 4 months a year, so maintenance will never be up to date, despite the thousands of workers busying away. 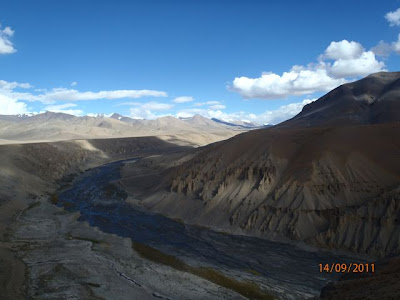 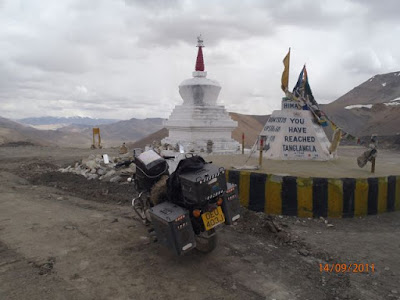 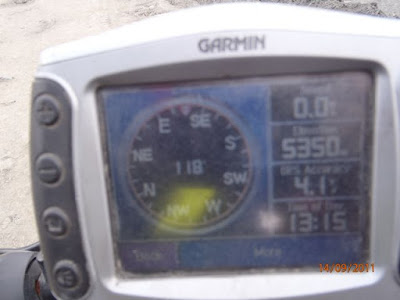 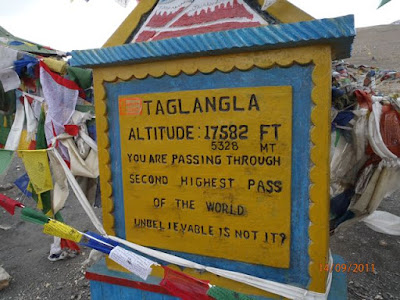 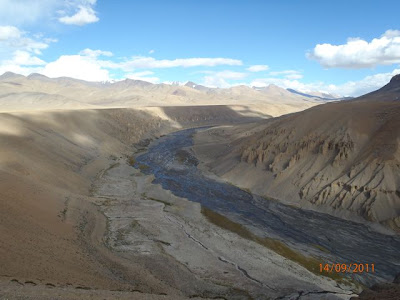 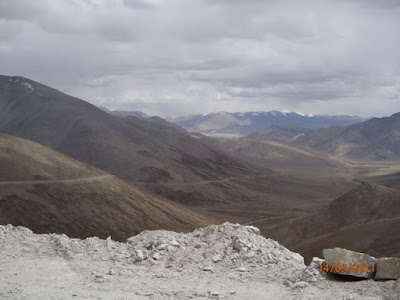 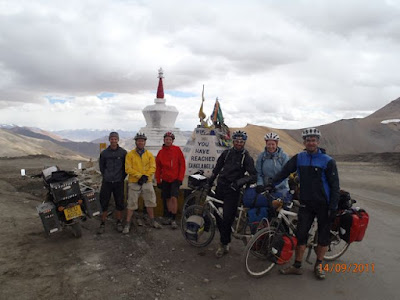 Some intrepid Brits on holiday and cycling from Shimla to Leh

There are no hotels as such on the first leg, but clever locals have developed a couple of these tented hotel villages. You arrive and get swamped by offers. Selection was lucky dip for me at Pang, having no gauge or reference, and went with the first tent on the right. 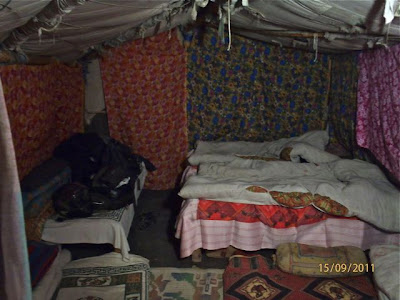 Pretty soon after my arrival, there was a great roar as the Aspen riders turned up. 14 guys aged between thier mid twenties and mid forties, who are on a 17 day tour of Ladakh on their much loved Enfields. I did not get to meet them all, but they were all great enthusiasts for the ride and with diverse backgrounds as Educators to the National shooting Champion, from polo team owner to former golf professional and national coach. They welcomed me into their group and stood me dinner that eve. Unfortunately one of their members was suffering from Altitude sickness (these mountains are all between 4 and 5000 mtrs) and was put on oxygen at the local military clinic. 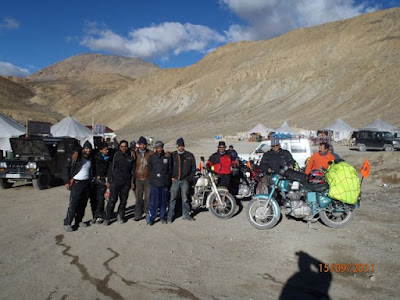 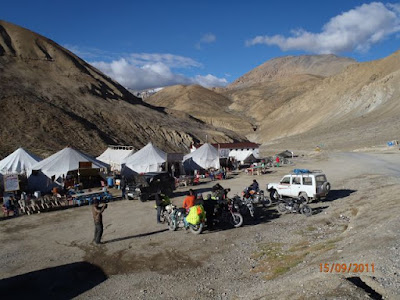 I set off early the next day, crossed a few well known high passes, drove some non stop amazing roads and reached Kyelang mid afternoon in the rain. 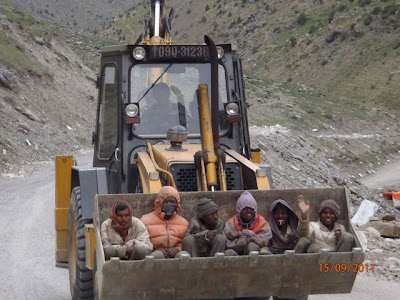 One of my favourite shots...road worker's transport 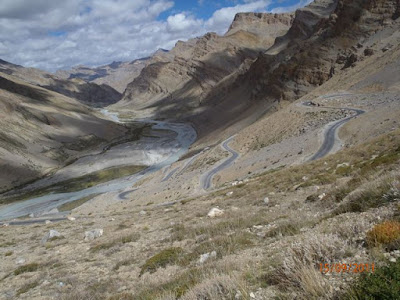 One of many road snakes...the most was 22 corners, if the sign was to be believed. 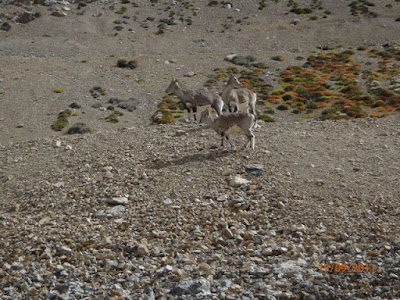 About the only wildlife I saw apart from the odd gerbil 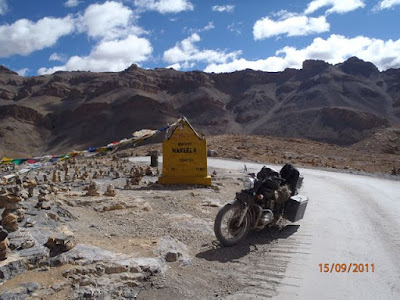 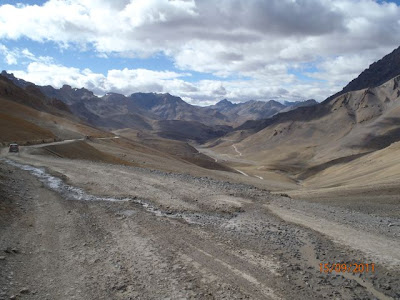 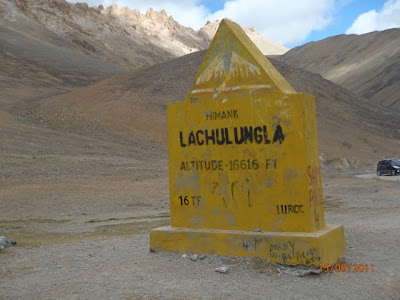 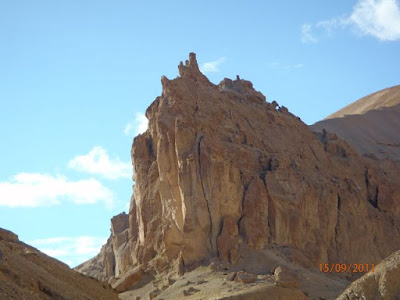 Nothing worked in Kyelang, no electricity, no mobile phone network and no internet across the whole town….weird, but apparently it was more often the case than not, I was told by a charming Sikh fellow who I had breakfast with. He was a hydro electricity engineer working on a local project. Luckily the electricity came back early evening.

Kyelang was my 'turn left or right' decision place. Either to Spitti Valley or to Manali.
I only have 6 weeks left in India before my visa runs out and what with the rain, I thought I had better get heading south and turned to Manali.

The rain got heavier and heavier as I climbed Rohtang. I had heard people mention this place in rather hushed tones and with some reverence….well the climb up was ok-ish, largely driving through streams of water as the rain water gushed off the mountain. On occasion it was so deep that the exhaust was covered, and I listened to that lovely bubbling sound as we bounced along hidden rocks under the water. My new waterproof trousers were not, and as the climb continued the rain changed to sleet, it was getting decidedly cold and I was mostly wet through. Sadly with the low cloud/fog, there was little to see, I imagine it must be beautiful on a clear day. It did cross my mind that there were no other bikes about, which was odd as one had been always passing bikes every hour or so over the last few days.

The descent started as a relief, quite smooth and with very little traffic. This was not to last. Tarmac turned to mud…deep mud, above the base of my panniers sometimes, which meant pushing Batty through it…she could not do it all by herself, it was very hard going. Then there was the traffic jams. A single track, muddy road 4000metres up the side of a mountain with the occasional passing place is fine when there is little traffic, but not on the day I crossed…it seemed every lorry, bus and army truck in the district was crossing that day and the co-ordination was zero. I persuaded an army officer to get a little wet and organise 3 trucks to reverse a 100mtrs back to a passing point, another to edge 1 metre forward, and bingo we could all start moving again after sitting for an hour. With the lorry drivers fretting about the risk of landslips (which were apparent all around) the only blessing was that the fog meant one could not see over the edge of the road…we were high up and it would have wobbled me I am sure. 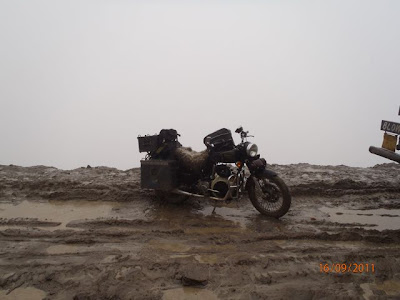 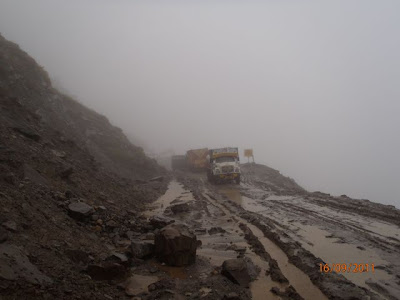 There are 8km of this sort of condition. I would have really struggled going up, rather than down. 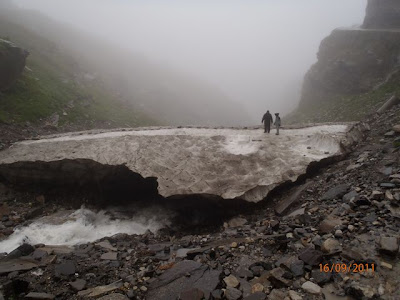 A mini glacier bridge near the top 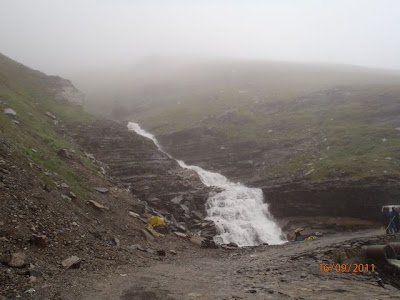 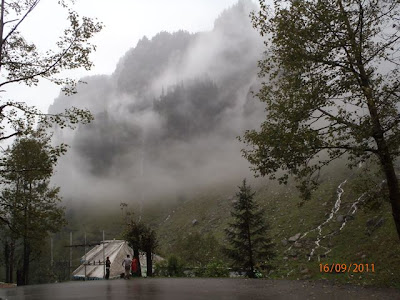 Nearly there, going down below the clouds and a welcome return to some greenscape and all tarmac roads

It was during the stop start of the traffic fiasco, that I noticed the front brake was getting spongy…a quick pump of it restored it for a while, but not for long and soon I was on Batty's good engine braking and the rear…not ideal. How I did not come off I do not know. I am no great biker, and what with my stupidly smooth road tyres, I deserved to take a tumble, but luck was with me and by late afternoon I was in a Manali hotel thawing out. There was 8km of that mud, and it was as good a work out that I had for years.

The next day broke very fine and I took Batty for a service.

these were the jobs…it took most of the day, and the price of a Himalayan crossing from Srinegar to Manali in terms of the bike repair was about £40-50, 3/4 of which were for parts. 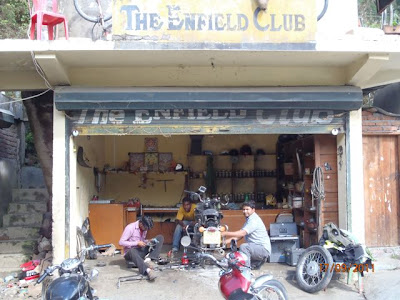 3 brothers who did a good job and were good spirited.
The Enfield Club, Vashist Chok, Rotang Road, Manali. -9816058420
I was happy and confident using them as their tools were all in order and well set out, unlike a lot of mechanics here. Also the chain came off the rear sprocket right outside their shop, so my hands were sort of tied. I had been on my way to a much recommended chap called Anu.
Posted by Unknown at 11:15 AM