Srinagar to Leh. Most challenging/exciting days yet

In the sailing world it is said that you should never take a girlfriend out for her first days sail with you when it is anything other than perfect weather, I think it could be said the same when taking someone on the back of a bike for the first time.

We left at eight in the morning with the expectation of it taking about six or seven hours. My pal Stephan, who I had met in Jammu, had e-mailed to say that it took him about six hours, there was very little on the road and the roads were pretty good. I think Stephan was blessed with a quiet day and a bike that enjoys rough roads. In fairness several other people had said that the road was good and we would not have a problem with it.

All was going well until we met a tailback of traffic, we drove past it ( the beauty of bikes) until we reached the taped off road. After a little confusion it became apparent that there had been a landslip and we would have to wait till it was cleared. 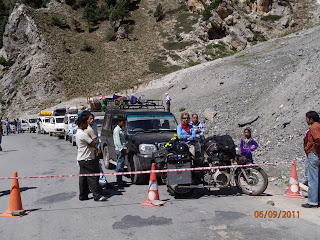 Luckily it was only for about 30 minutes. However this was the end of the tarmac and beginning of the gravel and mud road, it was also the beginning of the steep climb up to the passes before we reached Dras, the second coldest inhabited place on Earth. Changing repeatedly between first and second gear, Batty struggled around countless switchback corners that carried us up a single tracked road that a glance to the un fenced edge had you looking down hundreds and hundreds of deadly metres. This joy was enhanced by trucks trying to over take us around corners and fast appearing on-coming traffic. As a final challenge to that particular section of the road, Batty just ran out of power going up the steepest and roughest bits. Sophie quickly learn when to jump off and even then at times it was not enough and I had to get off as well and run beside Batty slipping the clutch until we got to a flatter stretch. I was dreaming of a 14 tooth sprocket rather than the 16 tooth I had replaced the standard 18 tooth with. The additional weight meant that Batty was carrying something like 35 stone which for a little 10 hp engine is quite a load particularly when going up the Himalayas. Eventually we reached Dras and had lunch. 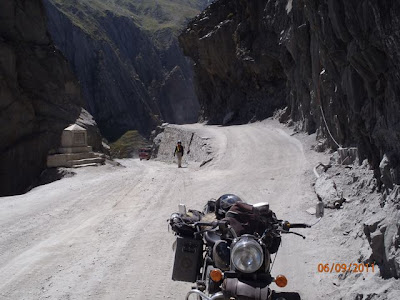 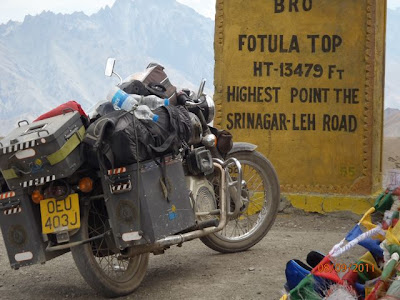 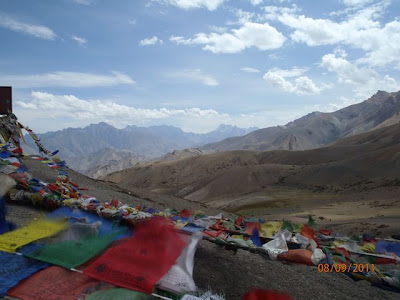 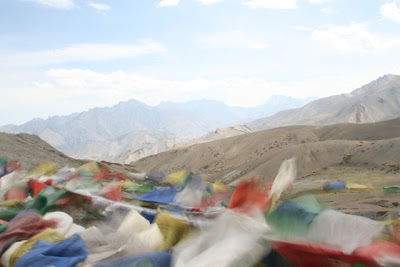 We were only halfway and prayed that the road would improve to Kargil. It didn't really and by seven o'clock we arrived at a hotel that we been tipped off about by Walter and his wife who had said hello in Dras, he had done that road two years before on a holiday with some other Dutch pals. The other excitement of the road was hearing small arms gunfire about 10 miles from Kargil. It was right on the Pakistani border but we thought it was just target practice. I was later to learn from some Army officers that I met on their bikes and shared a whiskey with, that it would have been definitely combat in that area….furthermore 4 Pakistan soldiers and one Indian soldier had been killed in the area a week before in an exchange of fire. We worked out that our average speed of the day was 15mph.. 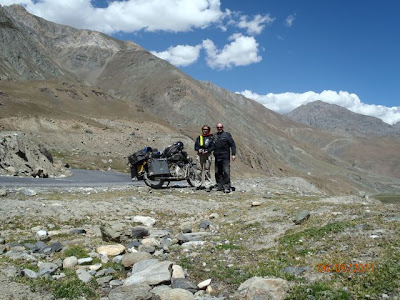 We elected to spend a day in Kargil as we were both shattered by the drive. We did go for a 2 hour drive down the Padum road until it switched from tarmac to gravel. What a stunning road, and when it is completely tarmac, it will be one of the roads to ride. Give it five years though. 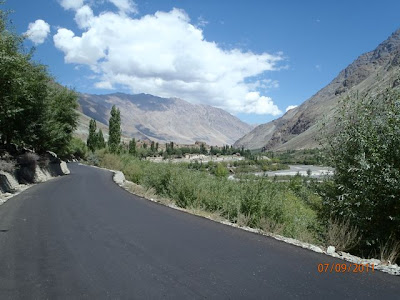 We set off even earlier for Leh at seven o'clock, again thinking that six or seven hours on much better roads should be about right. We were having a lovely ride and with the new support that we put behind Sophie, her back suffering was a lot less.

We stopped at Lamayuru monastery before lunch for half an hour and started savouring the new atmosphere of Buddhism that I'm afraid to say wins out over Islam, to my mind. 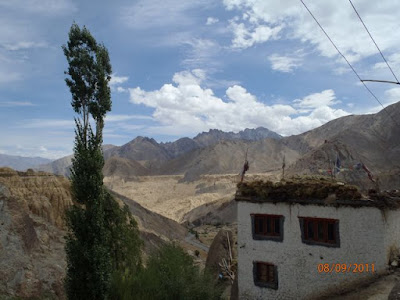 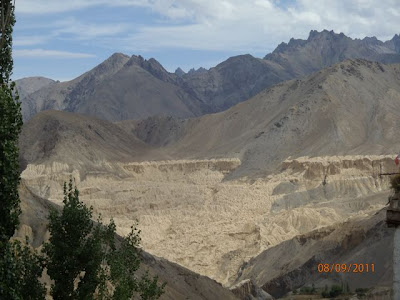 All was going well and we were only an hour or two from Leh, when we came up against another roadblock. Slipping past the traffic and up to the front we discovered that there had been a significant rockfall about two hours earlier and the JCBs and detonator equipment had only just arrived. We hung around for a couple of hours and watched rather entranced as the diggers slowly cleared the way. It got to the last few metres of rubble when something got jammed and the process stopped. At that stage it had been quite a spectacle, and we have met a number of other Western travellers caught up in the jam make it quite fun. It was remarked that in the UK a security tape would have been across the road a mile or so away and nothing to entertain those waiting. The Indian way, although very precarious, did at least prevent frustrations and foster some travelling bonding. 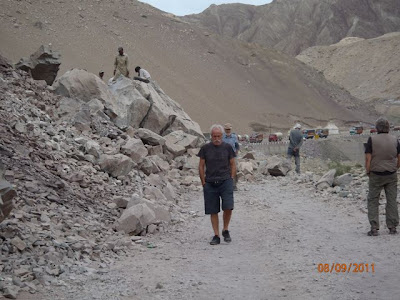 With the news of the now defunct digger we heard from an Army officer that there was an alternative new Road that was about an extra 12 km. He promised us that the road was Tarmac and would not be a problem for us. It was now about six o'clock and we thought it best to take this route. It was rather frustrating that we didn't know two hours earlier, but such is the way here. I was very wary of the time and how the night comes very quickly here. Before long our lights were on and I was breaking one of the few rules the trip, which was never to ride at night. To compound this anxiety, the road quickly changed from tarmac to gravel and the weather changed from a calm into hard squalls. Batty's lights are not that great and it took us about an hour and a half of very slow going, hampered by endless trucks overtaking us and kicking up a fog of dust, to eventually get back onto the main road. A nerve wracking time for my passenger, but to give her every due the only hint was the occasional tensing of her grip as we tiptoed around barely visible corners high up on the mountain face.

It was a 14 hour day by the time we found a hotel. The two days on the road to Leh from Srinagar would probably count as the hardest two biking days of my life (so far possibly). To have subjected Sophie to that ordeal is not something I would have done knowing what I now know, and nor would I think she would want to do it. However, hard and as exhausting as it was, Mother Nature rewarded us with absolutely amazing scenery and a sense of achievement that would not been possible without the pain.
Posted by Unknown at 7:07 PM