My last few days in Auckland both typified much of the generosity and fun that I had in the whole of New Zealand. This time the blame falls wholly on the shoulders of Hadleigh. We had met 10 months ago in Srinagar in Kashmir, where we were staying in the same guesthouse. In fact the meeting lasted about a minute, but when I came back to my bike a few hours later I found a note from Hadleigh saying if my world tour included New Zealand, to get in touch. We exchange one or 2 e-mails at that stage but good to his word as soon as I e-mailed when I arrived, his door was thrown open.
Not only did he provide a bed, we had a couple of nights out in Auckland and he and his housemates proved very good company so that I left New Zealand very much on a high.


There was also a work element, by chance. As it turns out Hadleigh is a top-notch creative director and had lots of useful and interesting insights into the creative world in Australia and New Zealand as well as India, where he had spent a couple of years and has strong connections with.

Chris Power is the nephew of Trevor, and a motorcycle journalist. We met at the Auckland Museum for a photo shoot and interview. I nervously await how that comes out, depending on which you will see a copy on these pages! 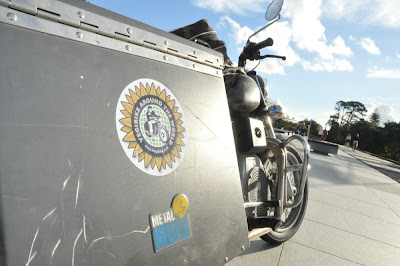 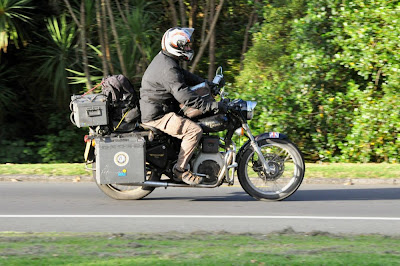 I also had a very enjoyable lunch with Nadia Flower, who we represent. It was very good to meet her at long last and get her angle on the creative world both locally and internationally. 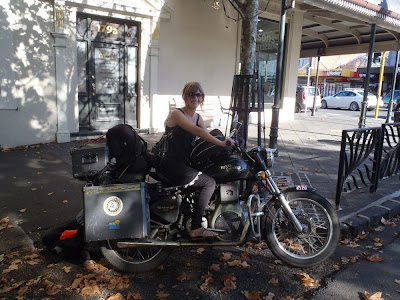 Like New Zealand, Australia has had a long history in my imagination, and to get here at last filled me with excitement. Now it's not that I thought anything but the best of any of the Australian men I've met, but there was a point in my mid-20s when it seemed that every girl in my community was having great love affairs with Australians, marrying them and then moving over here. So here I am about to discover what the magic is.

I was met at Melbourne airport by Mark, it was almost midnight on a Friday night which was well beyond the call of duty, but very welcome. He and his lovely wife Lucy and kids now live here, but I knew Mark when we were children in Devon.... his Dad was my godfather.

Nothing more could have been done to greater my welcome, and my introduction to domestic life Williamstown style was started with whiskey and over the next few days it was a combination of sightseeing, ball games, bicycle rides but invariably that whiskey bottle seemed to pries itself open at the day's end.

A few months ago I received an e-mail from a chap called Mike, based in Australia and stating that he and his friends had been following the blog from early in the trip and as members of the Australian Royal Enfield Club, would like to meet. That was a lovely e-mail to receive and we had intermittently corresponded since then. I had asked if he could recommend a place to get Batty serviced, and he introduced me to Guy.

Guy and Jude live about an hour and a half from Melbourne and they welcomed this stranger into their house, and Batty into Guy's workshop. I was there for 4 days and it so happened that these 4 days were ones of rain, I don't mean light rain, this was the very definition of non-riding weather. So it was a perfect bike servicing window. Spare parts were stolen from some of Guy's long suffering bikes, Norman from the RE Club came over for a whole day and helped me with some thread worn screws, various weldings and Batty was restored to far better health. My health was improved by non stop plates full of deliciousness,  a glass that never emptied and endless good company.


I returned to Melbourne for a big night out with Mark, Lucy and their friend Marnie. The night life is very busy and the first 3 'happening' restaurants had this no booking policy and were rammed for 3 hours, we ended up in a great place called Cookie. The girls got chat up furiously by the waiters, and ordered exactly what these young fellas recommended....I think Mark and I felt like amused passengers on that particular aspect of the evening. It was delicious though and happy passengers we were.

For those following my fuel challenges, I have a new Guru called David in Sydney. I am looking forward to meeting him, but in the meantime I am using a 10% mix of petrol in with the veg oil. I at last understand from him that petrol will ignite a little earlier than diesel in the cycle, enabling much more combustion of the veg oil than before. At the time of writing, I have done 100 miles like this, and if I get to Sydney my confidence in the new approach will be all the more. I know David has a few more plans for Batty, but that will be for a later post.