It comes as a bit of a shock when I realise that it was a year ago that I waved goodbye to home family and friends. At times it could have been the blinking of an eye, at others it seems like a different life. I have loved almost every of the moment trip so far and relish the coming year making my way home.

My Australian weeks are rushing by in a blur of social and mechanical frenzies. The feelings of home, overwhelming hospitality and generosity from all those I meet are pretty much the same here as in New Zealand. There is also another feeling emerging that the longer I am away from the developing world, the more I am yearning to go back to it. This is not because I want to live there, but for me at the moment at least, greater interest and fascination are found in cultures and societies least like my own.

That said I am enjoying my time in the 1st world immensely. Meeting lots of people I work with, competitors, friends of friends, members of the Royal Enfield Club of Australia, and do you remember I mentioned how many of the girls from my 20s disappeared off to this land into the arms of Australian men, well I have caught up with a number of them and had a lot of fun doing so.


I left for Sydney planning to take about 3 days, however 2 things happened to handicap this plan. Firstly my primary chain cover bolt stripped it's thread about 200 miles from Melbourne, and secondly a new attempt to use vegetable oil and a 10% petrol mix unfortunately failed to work.  As luck would have it, and indeed as has been the case in so many of my ridiculous escapades trying to use vegetable oil,  I managed to break down very close to a helping hand.  In this case it was Andy, who had heard me coming to a stop outside a local hotel in the tiny village of Cowwarr, seeking a bed. In Australia as a hangover from the prohibition years, a hotel does not mean it necessarily has any rooms and is often, as in this case, just a bar. Andy had just come back from work and on seeing my problem, he kindly said to come over to his workshop where he had various British bikes, and he would re-tap the thread. In fact it meant going into a local town to get the right thread, but once done Andy set to and made a fine job of it.
Earlier in the day, before the bolt had stripped, I knew all was not well with the petrol/veg oil mix and the engine was behaving in the fashion I had learnt to fear before engine failure. So after all Andy's kind kind work, the engine did not start, and I was stranded at 7pm. Andy said "Well there is the couch...one more for dinner Love" he called to his wife. So along with their 4 sons, aged from about 12 to 18, Mr and Mrs Andy we had a great evening discussing local life, the aeroplanes Andy works on for fun, the fires that killed so many a few years prior (Andy is a volunteer firefighter locally), and answers to my omni present question on who and how their family came to Oz in the first place. Always a fascinatingly and different story every time, but always a story of bravery and ambition or desperation and conviction.
Andy works for the local council collecting bins all around the beautiful district and left at 5 in the morning. I struggled to get at the bike by 7, but with the help of Dan, the eldest, got Batty back on the road by mid day....well that would have been the case had I not over tightened the bolt Andy had so laboriously fixed the night before, breaking the housing it was in. My heart just flopped initially, but as luck would have it I managed to get Batty to Brian in Heyfield 10 miles down the road and he and his brother re tapped it and got the cover better than new. All done with a generous refusal of payment, and a great 'cheering off' as I left.


The next day was my longest ride yet and managed to clock up 350 miles. I had a very important date and that was to join Kirstie and her family for her birthday dinner.  So my incentive was strong. 10 happy hours in the saddle, doing a lot of Spanish lessons (I want to at least be able to ask for a beer when I get to Mexico)

I stayed with Mike and Gilda for a couple of nights and they were hugely kind and welcoming as I grappled with the wonders of Sydney. 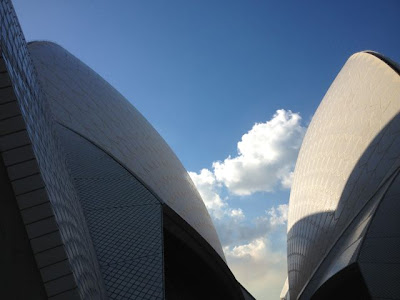 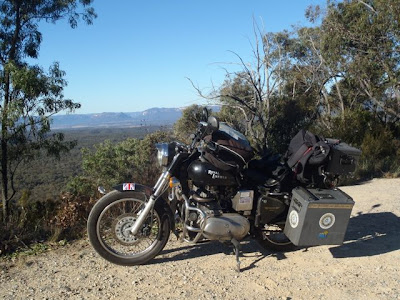 I am hopeless at staying longer than I said I would, but at Gananny, not only did I not want to leave but I could not, as I got trapped by huge down pours that made the dirt roads near impassable on Batty's road tyres.

I left in the end to go on to stay with Kirstie and Wal again near Tamworth and as luck would have it some neighbours were having a bit of an event, which included an exhibition by a stunt horseman and his steed called BJ.... apparently it was not short for 'Blow Job' I was corrected, but was a famous horse star  in the film "Australia". 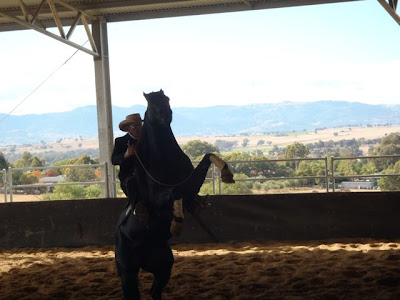 My Plan now is to head north to Cairns in about a weeks time. I have to drop back to Sydney for a work thingy next week, but that will only be for a day, and I will fly it. I am hoping to get some diving on the Great Barrier Reef and a bit of sun...

Re matters engine and veg oil etc. I had a great meet up with David in Sydney, who has been advising on all things to do with the fuel. David is a glamour photographer when he is not powering everything by veg oil, and has loads of experience and stories on both matters. He has helped uncover the secrets of my woes that has stopped me using veg oil. The new engines have been slightly re designed to make them comply with diesel emission regulations. This involves lowering the combustion temperatures, which is done by one or all of 3 things, lowering the compression, lowering the injector pressure and retarding the timing. Any of these things are obviously fine with diesel, but when trying to combust veg oil's greater viscous properties and slightly different burning properties, they fail and the fuel only partially burns. The unburnt residue is swept into the rings etc and quickly causing the compression to disappear.

I have written to Yanmar for their help, and will see what happens...in the meantime it is biodiesel if I can get it, or diesel with the odd litre of veg oil thrown into keep some pretence at vegibiking.