I am writing from a small town in Oregon called Eugene. This wasn't a planned stop, but Batty, by dint of her owner's failings, has cracked a crankcase and I am awaiting a new engine. Number 4.

I last wrote from Queensland and had a couple of relaxed days north of Cairns with some scuba-diving on the Great Barrier Reef thrown in. This was very much one of my boxes to tick, or my bucket list as I regularly hear it termed here. As it turns out although an amazing place to dive, I went in a boat with 40 other divers, and although the safety and equipment were all very much of a high standard, one felt like a number and it was not the joy of diving with a small group that I had enjoyed before.

Back in Cairns my ever enthusiastic and generous hosts Jack and Veronica, let me get started stripping down the engine, with the plan to rebuild it. This we did and before long I was putting it back together again having harnessed all of Jack's good friends and contacts to expedite the process. I don't cry very often, but when I broke the final cylinder head nut off I have to admit to some wailing and blubbing. Luckily my mechanical angels descended and what with Max's know-how and strength, followed by Steve's kit and his own formidable know-how the day was rescued.


It always takes a few days to organise the bike's shipment but I was lucky to find a very good shipper called Ellen of TLC International, who not only $500 less than the nearest other quote, but were a joy to work with.

Australia has been a bit of a mix for me. On the one hand I have met and reacquainted with nothing but the finest examples of the human condition, and enjoyed hospitality and help beyond any dream of expectation. However Batty was not reliable and I am sure I limited my adventures by sticking to pretty populated areas and thus missing out on some of the famous outback and probably the true flavours of the country. I have been making up for it by reading any few Neville Shute stories which romanticized a time from the 1950s. The other lingering feeling I had was that it is much more of a nanny state than I would have ever imagined. It took a while to realise it, and I'm probably saying this from a narrow perspective that doesn't reflect the total. That said every few miles on the road there are huge signs, ordering you to do that or to do this or you will die, every bar has huge signs with the house rules, no one ever walks a cross an empty road if the signs telling you not to. There are probably many other examples, but I was rather surprised. Maybe right from the word go there were lots of rules being made to manage the convict population, and it became a very much accepted way of people management?

Vancouver turned out to be a 30 hour trip, not uncomfortable or particularly tiring, but when I was selected from the passport queue to be taken in for special questioning by the border police for 2 hours, it made to feel like a most unwelcome criminal as they delves through every element of my luggage and private life.

It was pouring with rain for the 5 days I was in Vancouver waiting for the bikes to clear. Most of that time I spent in bed suffering from a bug caught on the plane. Plans to visit friends of friends did not materialise and I wanted to head south as quickly as I could.

Kathryn Rathke lives in Seattle with her husband Barry, and is a staggeringly brilliant illustrator. Kathryn has been with the agency for some 5 or 6 years and has visited us in the UK, so meeting up with her was a joy. It coincided with a party they were throwing for their wedding anniversary and 4 July. 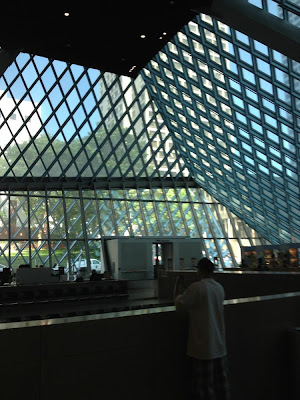 Kathryn very sportingly came on the back of Batty for a local trip around where they live and introduced me to a Seattle that was unique in terms of any tourist guide.

It was on the trip south from there that I 1st noticed an oil leak, I could not spot a casuse at that stage, but an hour or 2 later there was a great deal more. Then I started noticing that some of the crankcase bolts were missing. I tightened up what I could but it soon became apparent that I was in trouble again. A foolhardy 60 mile journey to Eugene, where the nearest engine agent was, put the lid on the life of this engine. Hindsight is a marvelous thing but oh how I wish I hadn't been taking the engine apart all the time to try and make the vegetable oil experiment work. Not only has it been a huge absorber of time, frustration and worries, it has been very expensive. The saving grace has of course been those that I have met on the way as a result.
From here I am going to San Francisco where I am going to fly across to New York to spend a few days with Stacey in the office, catch up with a few friends before returning for a 2 week campervan trip around California with my old and young pals Cass and Jazzy, who are flying over from Scotland.
Posted by Unknown at 6:57 PM