San Pedro La Laguna was just about perfect as far as I was  concerned for the very necessary 2 weeks Spanish lessons. I still mangle the language horribly with very little vocabulary and grammar, but can manage a few simple sentences about topics I choose. Vincenta was very tolerant and kept the enjoyable lessons going at a gentle pace. Hopefully more of the language will soak in over the coming months.
Lessons were one on one in small garden like sheds, right by the lake. Rather heavenly and probably difficult to beat for location let alone value. $120 for 5 days of lessons (4hrs per day) and 7 days full board accommodation with a local family. Probably a month or 2 is what it would take me to have a conversational chance, but there were a few who I met who went from zero to every day newspaper reading and talking  level in just 3-4weeks. Young, fast and absorbent minds, mixed with hard work and necessity for dream jobs seem to be important ingredients. Casa Rosario was my school and seemed to be one of the best there along with a couple of others.
Living with Gloria and Felix was comfortable and enjoyable. The dinner table conversation was a bit of a struggle, but not the delicious and varied fayre Gloria produced. Hardly anything from a packet, nothing frozen and all bought in the market daily or produce from their family farm/patch of land on the lake banks.
Much of the Guatemalan community life has the gentle backdrop sound of the ladies making tacos in the morning. It is a the 'pat pat pat' of the 4 inch circular unleavened staples being flipped from hand to hand. They are cooked on wood-burning stoves and the job is only done when 10-20 tacos are made per family member. At least an hours work every day. I think that 'pat pat pat' will stay with me for ever as a delightful harmonic sound of continuity and custom in a heavenly place.


My homework had competition from some office issues on various fronts that took quite a lot of time. If truth be told any excuse not to learn irregular future tense verbs was a blessing and my engagement in work issues has always pleased and fascinated my mind more than most other subjects.

The parcel arrived with the new gearing for Batty and in fact the new sprocket was 16 tooth, 1 less than what I wanted, but as it happened still not enough to get Batty up the super steep hill sides, without running beside her and in the end getting the help of a couple of local policemen, who pushed us up over the brow. I am not sure of their motive. Probably good old fashioned friendly service, but there was talk of bandits robbing tourists in the area, so probably this service had a touch of extra potency.

I planned to exit Guatemala fast via the historic and beautiful single storey town of Antiqua and then on to Honduras, mindful of a booking on the good ship Stahlratte from Panama to Columbia at the end of October.

A great day out from Antigua was the climbing of Volcano Pacaya, with a group of other travelers. 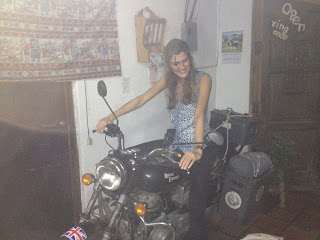 I kept meeting others and overhearing conversations about a couple of delights that to miss would be a crime. So plans changed and decided to spend a few more days here.
As great fortune would have it, the post that I had put on Horizonsunlimited.com about being ripped off at the border was picked up by Richard Chang who lives in Guatemala City and loves bike adventures and meeting new folk. He made the trip to see me in Antigua and we had a great day chatting about his fine country, bikes and travel.
My tyres were getting a bit worn low, and with Richard's 100% help,  Batty and I went into the city to sort this out. Now with new Pirelli tyres, Batty has unknown confidence on the very abundant and exciting roads of Guatemala.
The hand of friendship did not end at Richard's, for he arranged a number of his pals to show me around the city on the Saturday, and I think Rodrigo, Javier and Dagoberto have to be up there with the best of them at showing off Guatemala City. All the sights, and a delicious breakfast of revoleto, a pig offal stew at the central market.

Richard and his wife Suzanne, invited me to join them on a ride on Sunday. There is a meeting place on the outskirts of the city that many bikers gather. The community is a alive with variety of background and size of machines, but jelled by the love of bikes and the comradeship that they evoke.  My gratitude to Richard and Susan for their kindness and very good company is profound and I look forward to future crossing of roads.
As it happened the ride took me well on the way to Lanquin, the first of my quests and from where I write, before exploring Semuc Champey, the 'most beautiful place in Guatemala, if not the world' I had heard said.....until next time
Posted by harryls at 1:08 AM