I'm coming to the end of my time in Central America. I had rather carelessly thought of it as a bridge to South America, which in hindsight was a silly notion. I suppose being brought up in a time when all these countries were lumped together under the banner of Banana Republics, Contras and other various Dictator led terror, I had little understanding of just how gorgeous, friendly and interesting these lands of Mayan Temples and volcanoes have turned out to be. It did not start to well being ripped off at the Guatemalan border, but since then I have really enjoyed it and alas missed out on a huge amount of it from lack of time.


I had been promised great delights at Semuc Champey, and although I was there on a cloudy day,  the lime stone pools formed at the base of steep ravines were delightful to see. The authorities had laid on some good local trails, one of which had to had you climbing up  an incredibly steep route  to the viewing platform hundreds of yards above the gently cascading water 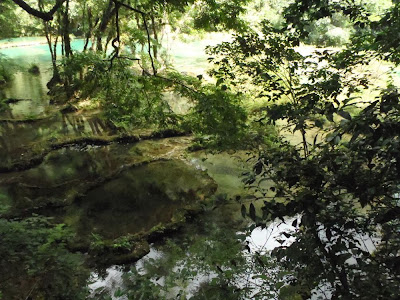 The original plan had been to head further north to Tikal, the most renowned Mayan  remains in Guatemala, but time paranoia and a wrong turning ended up taking me to the Honduras border to the equally well-known and regarded remains of Copan Ruinas.
Copan Ruinas  had one marveling at the ingenuity of historic civilisations. In fact it was built towards the end of the Mayan empire (About 1200 years ago), in a desperate attempt to appease the gods who they believed were punishing them for 10 years of drought. Alas it did not work and the civilisation crumbled with the failing harvests. It is now understood that over the hundreds of years that the Mayans thrived, the whole area, from southern Mexico to Honduras had been heavily deforested for building and crop growing. A poignant example of how deforestation stops the rain from falling, and the consequences there of.


The next day was a mighty long 12 hour drive, 320 miles, and I almost crossed Honduras in it. A beautiful country, not rich by the look of things but very scenic and worthy of more than my one day. That said I did see 2 accidents soon after they happened. The first was up in central hills where a man lay beside the road, covered in blood with police and medics around him. I did not see his face as I was waved past, but feared the worst for the poor chap. The next one had 2 cars very smashed up with a lot of teary people about the place. The ambulances had just overtaken me. I have dreaded having to use my first aid kit and let alone my very slight first aid knowledge, but these were the closest I have come so far.

It is not really surprising as there is a tendency to overtake on the brow of a hill and on corners.  More than once being a slim bike has been a blessing.

On to Nicaragua and...
I spent a couple of nights in Leon, which I had been excited about, it was written up as a university town and heaped in history. Maybe I was in the wrong frame of mind, but I'm afraid I found it a rather drab place apart from a very good art museum and a massive cathedral, the largest in Central America.
A town I thought just fantastic was Granada. It was beautifully kept, and strictly denied any modern buildings, and just a few more than one storey high. In fact it reminded me of Lang Prabang in Laos, which had been a favourite town on this trip...it now has an equal. We had a 1/4ly work meeting there so I upgraded to a starred hotel which made for almost forgotten comforts...air con, room service, breakfast included...the joy.

When I was about 5 miles out, on my way into Granada, I was overtaken by Mark on his Suzuki. We pulled over and chatted...then went for a beer. He semi lives there and was a good friend to me over the next 4 days.

Batty did another great 2 day marathon across Costa Rica which was almost like a poorer US state, but with much of the trappings. Beautiful all the same, and frustrating to have missed it.