So the Galapagos…… Just as a bit of a background, it is pretty difficult to go to the islands independently and see the vast variation of animal and fauna life by just turning up and taking day trips. So it means one has to sign up for a tour on a boat. There are probably about 100 different boats, all offering different lengths of tour and varying comfort. Carlos had put me onto his travel agent and they got a last-minute deal for me on a ship called the Santa Cruz.
This catapulted me from being the lone traveller into the company of 70 other trippers, all excited about this unique place. Most of my fellow passengers were on their annual holiday although there were a few other long-term travellers such as myself.  The age group ranged from 80s to early 20s, and from aid professionals to scientists. It meant putting on different perspective hats to talk to all the different people, and that was something I enjoyed a great deal. 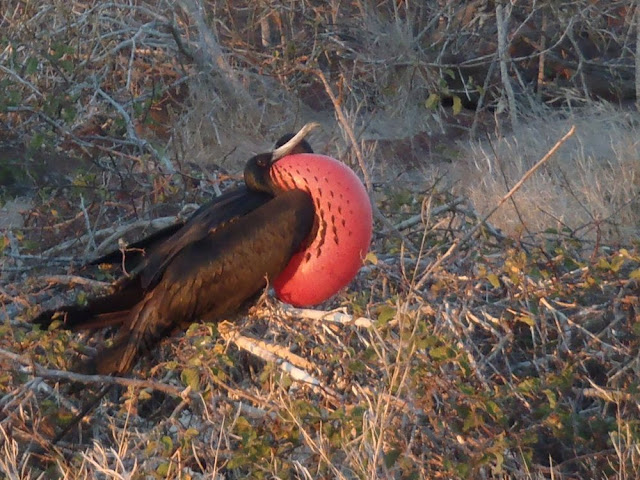 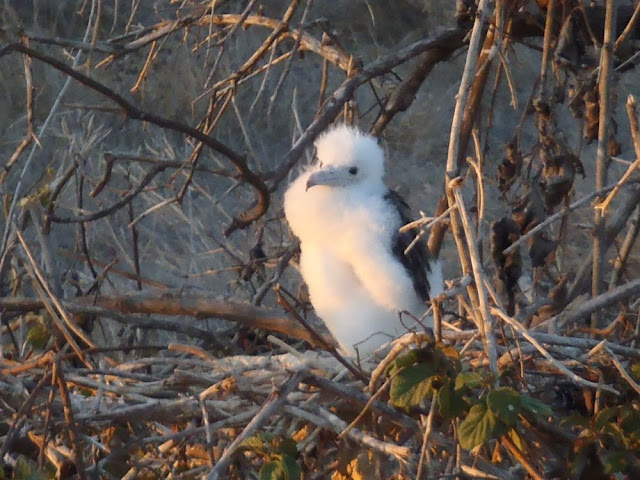 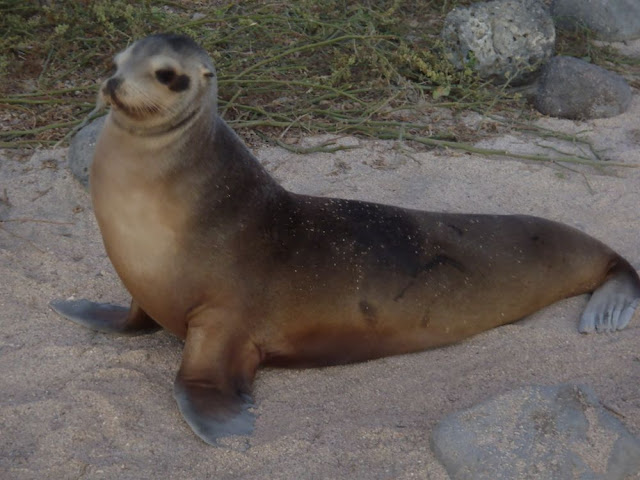 Back in London, Galapagos was a weekly word  used, as it is the name of one of my favourite restaurants in Battersea, and Steve, the co-proprietor, is Ecuadorian. Whilst the delicious food may not be from the region, the warmth and friendliness of the experience certainly is. 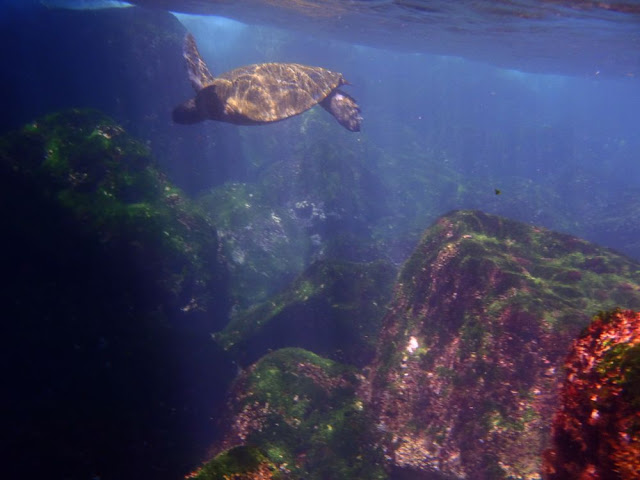 I had hoped to do some diving there, and in fact had been promised it is part of the cruise. Alas there had been a miscommunication as what constituted scuba diving and snorkeling, so snorkeling it was. Whilst of course different from being 50 foot under, the sheer abundance of marine life has to make it the best you can get, and I did not feel too hard done by. 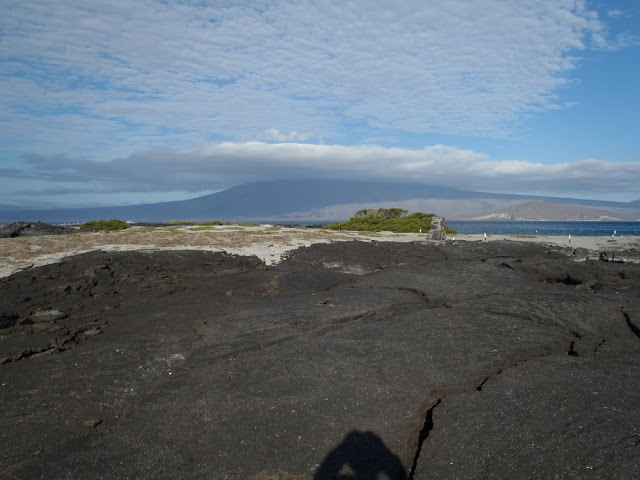 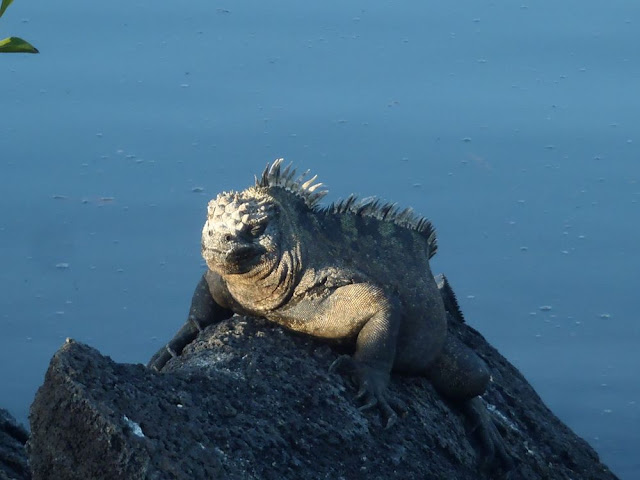 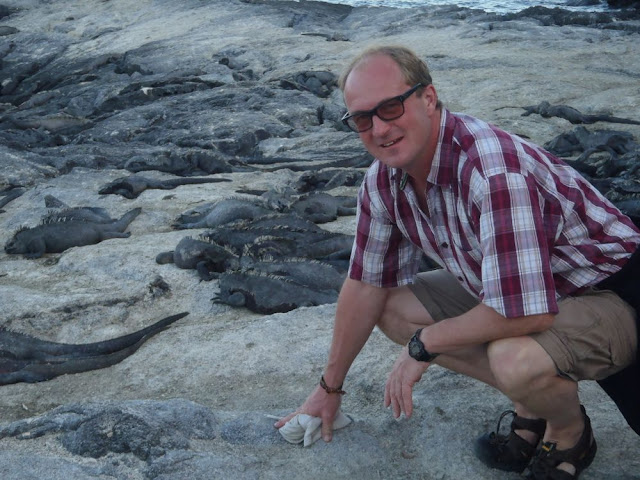 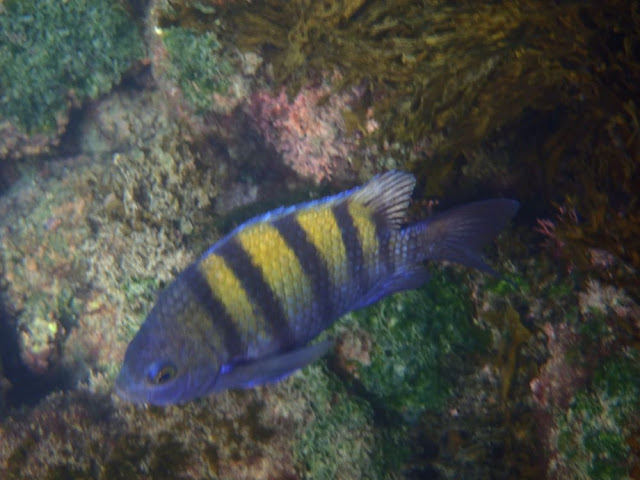 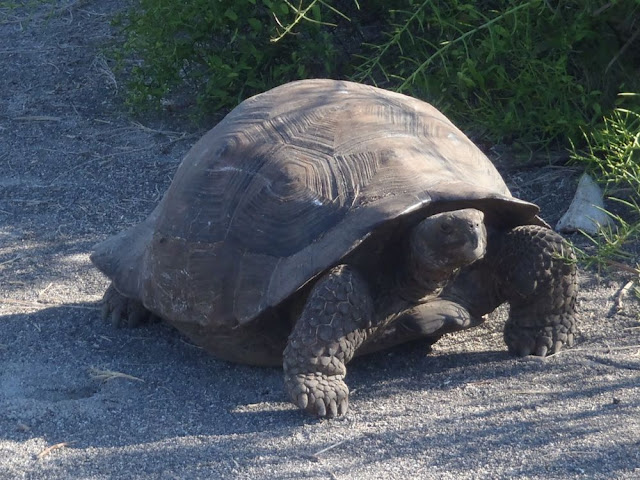 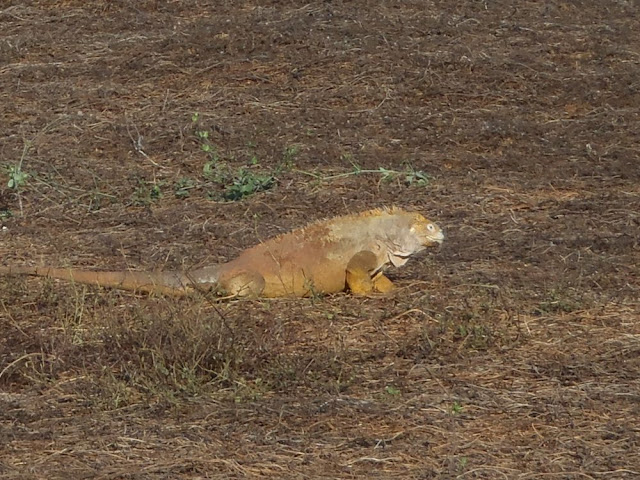 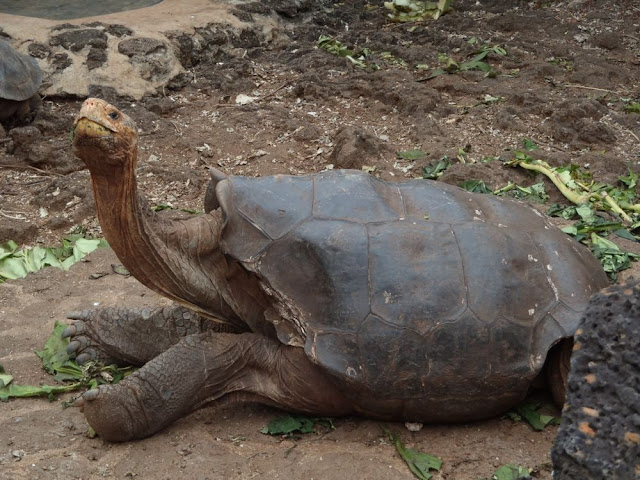 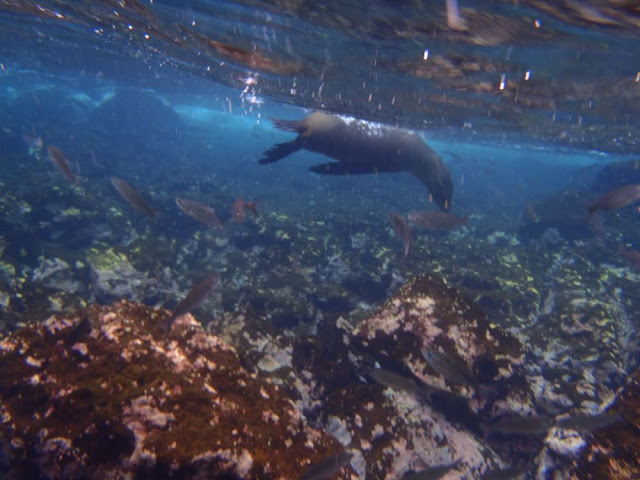 From 7 o'clock in the morning till 10 o'clock at night this very well oiled machine had us in groups of 12 and disembarking from the ship on rubber boats to see new and wonderful different places as we spent five days going around the Western islands.
I'm going to have a slight moan about the Santa Cruz (owner by ETICA / Metropolitan Touring), because in spite of its extremely well-run operation, it's comfort, delicious food and a great team of naturalists educating us….I twice saw them pumping sewage into the sea when we were anchored by different islands. The rule is that they have to be 6 miles offshore to do this, and anything less is a breach of the law and far worse, a serious compromise on the survival of local wildlife,  not to mention the fact that we were snorkeling nearby. Every day we were reminded not to step off the path,  touch the animals, let alone feed them, yet there they were hypocritically polluting the very place that sustains them. I did ask for skipper about it, and he rather brusquely told me that it should not happen before walking away without explanation or any hint of action. It happened the next day again, so I assume it must be commonplace.  They gave us evaluations forms at the end of the trip and it rather dominated my assessment.

Back in Quito, Batty had new forks (from a Yamaha), a new additional front light and lots of other needed bits serviced. It took a couple days more, but Carlos did a fine job finding parts from other vehicles to replace worn original parts, so Batty was fit for the next 10,000 miles that I probably have left.
I moved to a different hostel that Julia and Chris from the ship had recommended. For a couple of nights, along with Cornelia, Yves and Ivo we hooked up for fun dinners and one night went off to find a rock concert in the main park.
Dr Carlos, as I now need to call him to differentiate, rode with me for a couple of hours on the way to Banos, a spa town five hours away, set in the lower Andes. It was great for me to have a companion, but I fear are little dull for him as Batty huffed and puffed her way up the steep roads to Chimborazo,  Ecuador's highest peak.

By this stage I was beginning to get itchy feet, and the need to head on South was pressing.  But before Peru I had had an invitation to stay with Dr Carlos's mother in Cuenca. Normally it is a five-hour ride, but if you take the mountain route it takes two days. I haven't particularly planned  which way to go, but the GPS's plan was one of mountains and rough roads. Although this made me a day late, I did see some beautiful Ecuador, and my first roasted  guinea pig. 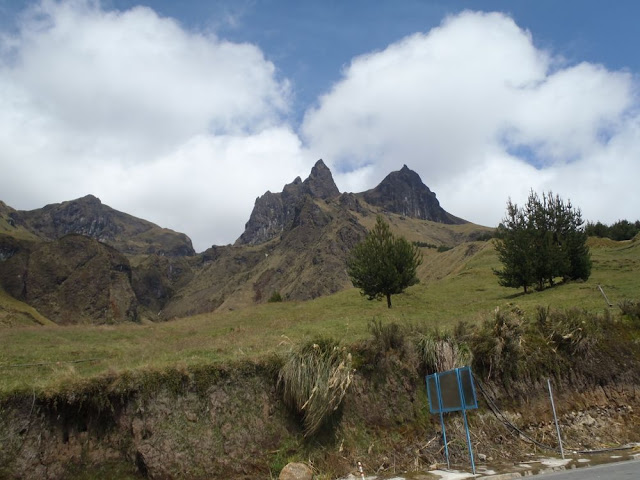 For the first time in now 35,000 miles, something was up with Batty's gearbox. I was able to change down gear, but not up. Fortunately Royal Enfield have a secondary gear selector, to help find neutral, and with a bit of practice one could use the full gear range albeit in a rather clunky way. This happened about an hour from Cuenca.

Dr Carlos was visiting his mother that weekend and I was welcomed   most sincerely by Bina, his mother, and by Susannah and Gustavo, his sister and brother-in-law. They all live in a beautiful apartment building that they designed and built a few years ago which takes up the whole side of a piazza right beside the river. Everyone has their own apartment, and I was given a bedroom in one which acts as an office for their architectural practice.
Carlos called a friend of his, Estefan, and he knew the guys who ran the new Royal Enfield showroom that had opened there only a year or so ago. So early on the Monday morning we were there, and quickly taken to Pedro who did the servicing for them. He quickly found the problem...a broken spring, which was not a spare they kept. Estefan jumped on his bike and after several hours returned saying that he could not find a replacement, but had found a welder who was going to fix it.

Sebastian, who runs the Royal Enfield business had, in the meantime, been busy on the phone to his local media contacts...it is a small city in these terms. So whilst Batty was awaiting her renewed spring, her rider was off doing a couple of magazine and newspaper interviews, followed by a live radio interview with German Peidre, the owner and producer of super949, a local rock radio station.

Here is a link to a small piece in Amateur magazine
I am awaiting a podcast link to it, although a little in English, mostly it was in rapid fire Spanish. I get that the general line was about how the time to do something different in life is always is never the right time, and it was good to witness someone living their dream. Before the interview started, German had asked about girlfriends in the 30 odd countries I had listed...jockingly I replied, "everyone of them"....then the brute asked the same again live! I muttered something about not wanting to compromise anyone's virtue.....not the radio I think he wanted....

The next day Batty was quickly back together and the plan was to ride with Sebastian and Estefan towards the Peruvian border. However we were joined by three others, and six Royal Enfield's headed off. Batty was at last speaking her own language, having had to put up with Japanese and German  companions since Australia and before that India. 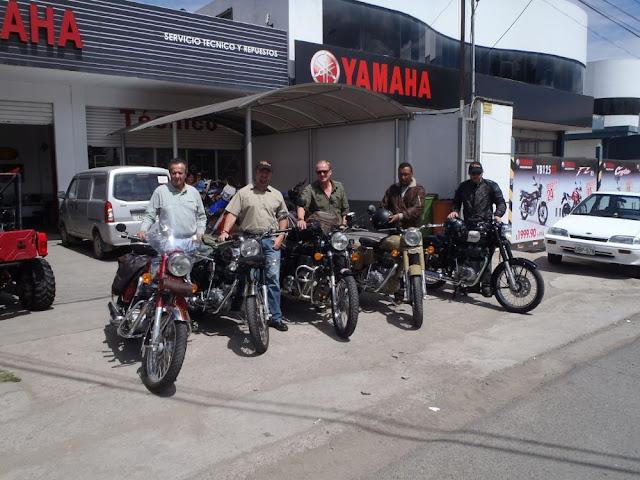 Crossing over the border to Peru was pretty straightforward, and I met Ben there who was on a bike heading the same way. We plan to meet for a drink at lunchtime in a town called Mancora, about 100 miles down the coast. Ben had to be in Cusco for his birthday on Friday,  which meant about 2000 km in two days. One drink led to another and four hours later he set off. I found a hotel. I'm looking forward to hearing the rest of his tale if I catch up with him.
Posted by Unknown at 11:56 PM