The three weeks in Columbia was a bit of a mix. In hindsight I think I should have spent a bit of time in Bogotá and a few places north of it to have got a fuller flavour. At the moment it is the rainy season and that coupled with some quite high altitudes it has made for some rather damp and cool days. By and large the rains come in the afternoon, but this has not always been the case .

I left you last in the town of Medellin, which is a principal city. There were quite a few of my fellow  voyagers from the trip from Panama there at the same time, and we hooked up for a evening of pizza and copious amounts of rum. I had made the mistake of choosing a central hotel, which although close to some of the attractions,  was also home to the wretched and destitute. It meant not only empty streets at night, apart from the prostitutes, winos and addicts, there were very few eating options. Some friendly security guards offering to walk beside me whilst I went to get a bite to eat (chicken is 90% of the menus) on one evening. The other bikers were in a much more fashionable part of town, and I regret not moving there. 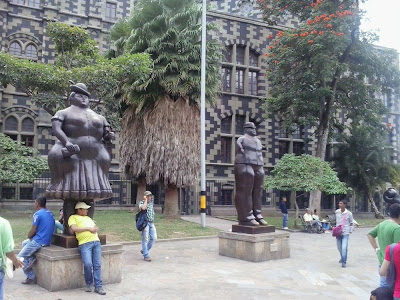 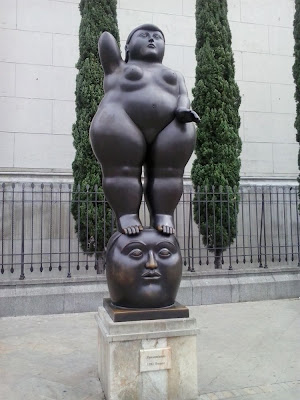 I became a fan of Colombia's most famous artist, Botero. He is still alive and well into his 80s,  being a son of Medellín there is much of his work on display both in a gallery dedicated to him (which he gifted over 200 of his originals to) and also in a large piazza, where there must be at least 20 of his bronzes on display.

The next port of call was the town of Salento in the coffee growing territory. A rather lovely simple town, which is catching on to the tourist thingy. Good for local businesses etc, although  the inevitable sameness of that path is beginning to show through, in terms of  things been written in English, menus offering a global  choice and increasing numbers of handicraft shops. 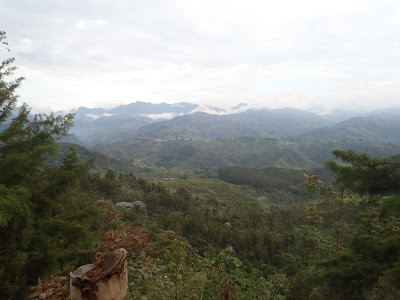 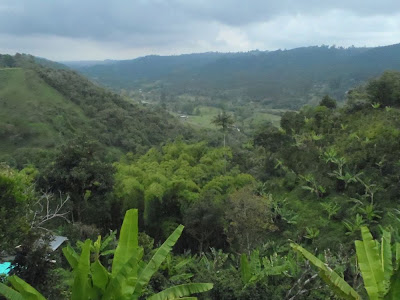 I took myself off for a very wet walk in the nearby  Valle de Cocora. I thought 13 km didn't sound too tough, but it was a steep climb and by the top I was stopping every hundred yards struggling for breath. Although not exactly walking fit, the near 3000m height is what really did it. 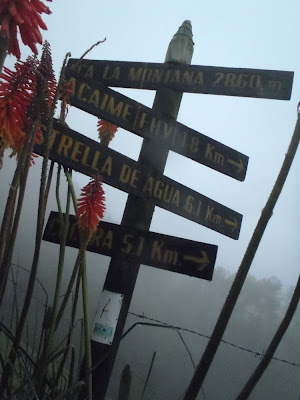 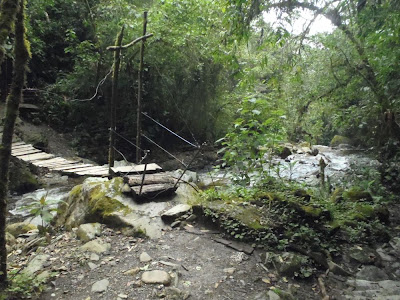 Something I'd been looking forward to a great deal was going to the city of Manizales.  In 1922 a cable car system was built between the city and the numerous surrounding valleys. It revolutionized  coffee production and greater prosperity was bought to the area and country. The man responsible for the design and engineering of it was called James Lindsay....the Great Grandfather of my pal Pat. Some videos were made of what little sadly remained of the system, which was at the time the most celebrated engineering feat, using this technology, of the age. 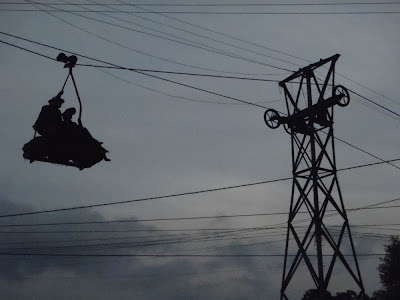 On the way south the plan had been to stay in the town of Cali for a couple of nights....I didn't get there till after dark and having found a place to stay, I wondered outside to try and find some super. It was not a nice atmosphere, and after the third person told me that it was dangerous at night-time and I should really get back to my hotel, I decided to leave first thing in the morning, which I did  and headed on towards the border with Ecuador.

When I got to Pasto, I had a message from Chris and Marge (two more of my shipmates)  with the news that they were arriving the next day and also that Jon and Pete (of ToughMiles.com) were in town following a 60 mph crash. It was Pete's bike that somehow found its way into the large rain gutters that the roads here have, and it was the large concrete block that ripped away the bottom of the engine. These guys had started from England in April and having driven across Europe, Russia, Korea, then the Alaska down to Colombia in six months had met with this potentially fatal accident. Luckily Peter had walked away from it, praising his helmet and  the body armour  that he wore. However the bike (Suzuki 400) was a write-off as far as any UK insurance company would have been concerned. As luck would have it they were picked up by the larger-than-life character Ariel, who took the bike to a man he described as the maestro. Amazingly within a week he had the bike going again having welded all sorts of things that would have never been attempted at home.


Unfortunately Pasto, is not a very nice town, rather industrial and full of diesel fumes, or so it seemed. By the time we had arrived they were bored stiff, although Pete had managed to find a lovely local girlfriend. I ended up staying an extra day there, as the night work was somewhat debilitating. It was also great to see them back on the road again, and worth waiting for. They are now far ahead of me, as they needed to be back in England by the middle of January, having got down to the bottom of Argentina.

I played tag with Chris and Marge going down to the Ecuador border , well that sounds like there was a hint of competition, but I can assure you that their BMWs had a lot more whizz than Batty, but we did catch up with them at various points, like the 2 hour border rigmarole.

Batty needed some service work done, and having done a little research on HorizonsUnlimited.com, I went to find TecniMoto  in Quito, the capital. It very quickly became apparent that this was going to be a good choice of mechanic, as Carlos loves working on British and older European bikes. I have left Batty with him, whilst I go to the Galapagos Islands, to change the front forks, replace the primary chain, solve an oil leak,  and add two LED spotlights. The last items is very long overdue, as the alternator on the diesel engine does not giving out as much electrical chat as I need to run the front light during the day, so I haven't to date. It also means that driving at night is limited to about two hours before the battery is flat. The idea with the LED lights, which take about a fifth of the headlight power, yet are more powerful, will be to get around this problem for the rest of the journey.

As is the way with Batty, I keep meeting people, and in Carlos's shop a fellow client by the name of Carlos (it seems to be an almost de facto name here) appeared. A bit older than me, with a medical practice in the city, he said "let's go" and before I knew it I was on the back of his Africa Twin being taken to lunch, before a tour around the city. Now I, like many other riders, hate going on the back of bikes,  and I told Carlos this, "no problem" he said "I'm the same". 10 minutes later a very wobbly Harry got off the bike at the restaurant. It was here that he  modestly mentioned that he used to do a bit of racing. It subsequently turned out that he has been the national champion on bikes from 350 to 900 cc many times over. Very decently he realised my delicate character and for the rest of the tour took it very easy.


In the evening we were joined by Carlo, Carlos's brother-in-law, and we went for dinner, followed by an abortive nightclub visit. I was honoured to be included in all this and terribly grateful of course, but this generosity did not stop there. A plan was made for the next day to go up to the top of the local volcano that overlooks the city on a fairly newly opened cable car, to be followed by lunch  with Carlos's ex-wife's. 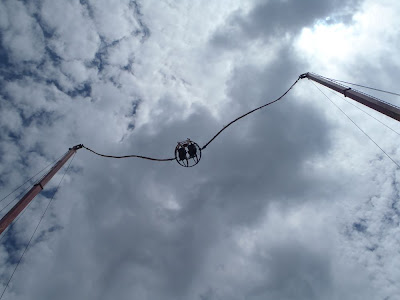 Lunch with Silvana and her sister Janet, was a true feast. Carlo's flight back to his home in Italy meant that the three of us had to eat before the others, and we were waited on like kings with mouthwatering delight after delight. 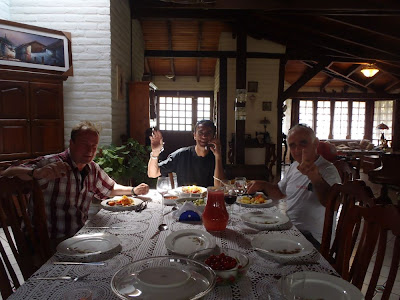 There was a conversation about why my trip was called vegibike etc and quite out of the blue Silvana said "10 years, that's all we've got left before mother nature really turns against us" after we had talked about some of my worries concerning man's out of control consumption and the fragility of the environment. Then she said that her grown up children had told her that they were not going to have children themselves, because the world would be a horrible place for them to live. I was a little taken back by these extreme takes on our future, and I do not share them particularly, being much more optimistic about man's ability to arrests his environmental wrongs, whilst developing technologies to live sustainably. But it was rather enlightening to hear it from professional people on the other side of the world.